On Saturday morning as I was heading out for a run at the Chattahoochee River, I found my car in the condition you see in the photo above.  Let's ignore the reason I was parked half in and half out of the garage and focus on the frost instead.  As you can see, the frost appeared only on the back part of the car.  The part of the car that was under the roof had no frost at all.

The physics of this phenomenon is really interesting so let's examine it.  Then we'll see how the principle involved affects what happens in buildings, specifically the comfort felt — or not felt — by occupants.

Do frost and dew fall out of the air?

I didn't get a photo of the top of the roof over my garage, but it also was covered with frost.  Frost appearing on the highest surfaces makes it look like water vapor just falls out of the air and hits the first surface it finds.  According to meteorologist Paul Knight, quoted in an excellent 1985 Chicago Tribune article on this topic, that was the common belief up until the beginning of the twentieth century.

But it's wrong.  The air around a house, above a house, and in the open garage or carport all have similar concentrations of water vapor.  But there's nothing that would cause water vapor molecules to drop out of the air at a certain temperature and land on the first surface they find below where they began falling.

If that were true, frost would have formed on the part of my car under the roof.  It just would have been a thinner layer because of less water vapor in that smaller space between the soffit and the car roof.  But no matter how closely you look, there's no frost on that part of the car.

Since gravity doesn't explain the frost-free surface under the roof, what does?  The answer is in an article I wrote nine years ago, Naked People Need Building Science.  In that article I wrote:

Every object radiates heat. The amount of radiant heat it gives off depends on its temperature (to the 4th power!), surface area, and emissivity.

Anything that has a temperature will produce thermal radiation (also called radiant heat) by the jiggling of molecules within.  That thermal radiation removes heat from the object.  But the object is also receiving radiant heat from all the surrounding objects.  The image below is from my Naked People article and it illustrates the imbalance in radiant heat transfer in that case.  The single pane window at 35° F doesn't radiate nearly as much heat back to the naked man as the naked man radiates to it.  So there's a net cooling, at least in that direction. 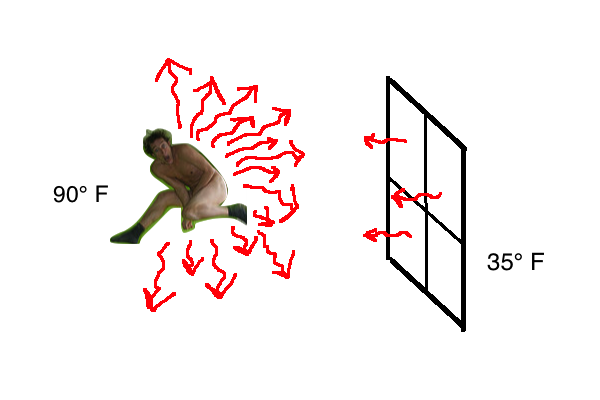 The night sky turns out to be quite cold.  It can absorb a lot of thermal radiation without sending much back.  The result is that a terrestrial object — the back of my car in this case — under a clear night sky will get colder.  That same object under a roof — like the front of my car — will have a more balanced transfer of radiant heat and thus will stay warmer.

There's your answer.  The back of my car got colder than the front of the car because it radiated away a lot of heat to the night sky without getting much in return.  And that temperature decrease put the surface of that part of the car below the frost point (the below-freezing equivalent of dew point).

The implications for comfort

My Naked People Need Building Science article discusses the effect on comfort of being naked in front of a cold window.  As with the car getting colder when exposed to the night sky, a person exposed to a cold surface in a building will feel colder than when they're surrounded by warmer surfaces.

My friend Robert Bean up in Calgary, Alberta deals with this issue all the time.  And not just because he lives in such a ruthlessly cold environment.  He's also a member of ASHRAE's committee on thermal comfort.  A lot of people think of air temperature and humidity and sometimes air movement when asked what factors affect thermal comfort, but the big one that doesn't get nearly as much attention as it should is the one related to the temperatures of the surrounding surfaces.  It's called mean radiant temperature and factors in the temperatures of all the stuff around you.  The warmer they are, the warmer you are.

This same phenomenon applies also to cases where our buildings make us too warm.  Bonus rooms are the most common culprit there, but it can happen in other places where you have high temperatures on one side of an inadequate building enclosure component.

Multi-cell window shades help a lot with this. I install them in all of the homes I build if buyer lets me. The newer ones can be raised bottom up or lowered top down to let in light and keep some privacy.

Thomas, I've had those shades in the past and loved them.  They do block the radiant heat transfer, but they won't stop condensation on the windows if it's cold enough.

Maybe you intended this by inference, but I would say the condensation would be worse due to the cellular shades.

Lee, yes, you're right.  Just about any window covering will worsen the condensation potential of a window because it lowers the temperature of the glass by insulating it from the room.  But without an air barrier, the water vapor in the room air can still find the cold glass.  The only type of interior window covering that wouldn't make it worse is one that's insulating and airtight, and I'm not sure those exist.

They do exist! It would be another window--specifically, the inner pane of 2- or 3- pane windows.

I heard the real reason is that you have been sleeping out in the car in the plush reclining front seat. Any truth to that rumor?

Dave, well, now that the secret is out, OK.  Yeah, I've been sleeping in the car but it's not because of the "plush reclining front seat."  It's because I love having an electric car!

You can also observe this effect in the way dew forms on an exposed parked car but not on the pavement beneath. And it's why outdoor temperature sensors must be shielded (likewise in summer for the opposite reason).

Among amateur astronomy circles, the night sky is sometimes referred to as a 'perfect black body radiator.' Perhaps that would be true were it not for the atmosphere. When I lived back east, I frequently had to use a 'dew shield' on my telescope, which limits the amount of sky (and extraneous light) that the 10" front lens can 'see' (my telescope's Schmidt-Cassegrain optical design features a large front corrector lens). Without the shield, the corrector lens would quickly fog over as it cooled below the dew point due to heat lost to the sky. Similarly, I had to erect a canopy over the table where I spread out my observing lists and star charts.

My house is a great example of this. We have no garage, no carport, just a driveway. Like most lots in Asheville ours is sloped, so that the house looms large on the hill above the driveway. The driveway has two parking spots, one is directly in front of the house, such that an imaginary line coming off of the windshield at an angle normal to the windshield would hit the house. The other spot is at the same angle but sits to the left of the house, so an imaginary line normal to its windshield would point at the night sky. I often run into conditions where the car in the space in front of the house doesn't have frost on the windshield, or has much less frost, than the car in the space that sits to the side of the house. This used to perplex me, until I became a building scientist.

Coming from my fairly well insulated, but comparatively leaky 1960 ranch house to my new tightly sealed and very well insulated Pretty Good House, I can attest to this radiation phenomenon. The old house felt cold at 68 degrees. The new one is cozy at 64. In the old house being near the windows and doors brought chills. The one, with much better windows and doors, plus a layer of exterior foam to reduce thermal bridging, allows you to sit anywhere an feel fine.

I still believe it's a result of moisture in the air falling out like dew at night time when the temperatures drop below the "Dew" point!

Double and triple pane thermal window inserts are awesome at stopping condensation and work great in combination with cellular shades for us true Northeast energy geeks.