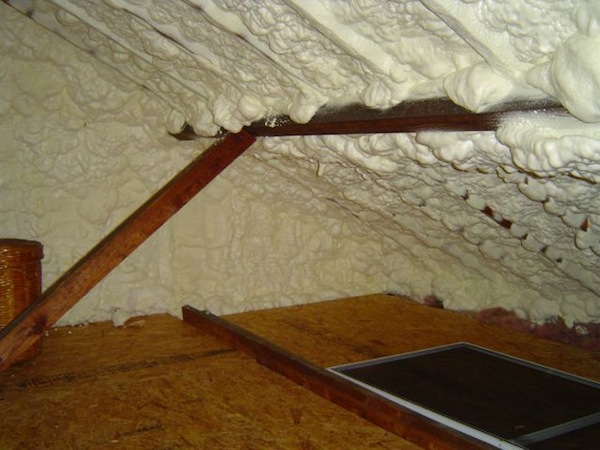 Murmurs and hearsay about open-cell spray foam insulation have been gaining traction for a while. It rots roofs, people have told me. Not long ago, someone even told me that in Florida, roofing companies won’t let their workers go up on roofs with open-cell spray foam because the roofs are so spongy, the guys fall right through. Open-cell spray foam is getting a bad reputation among some people in the construction industry. But is it deserved?

The Energy Nerd stirs up a hornets’ nest

Martin Holladay, the Energy Nerd who muses at Green Building Advisor, stirred up a hornets’ nest at the beginning of this year by writing an article titled Open-Cell Spray Foam and Damp Roof Sheathing. In it, he reported on two papers presented at the Conference on Thermal Performance of the Exterior Envelopes of Whole Buildings XII last December. Both papers basically came to the same conclusion: “Open-cell spray foam insulation is risky in all climate zones.”

Open-cell spray foam has become popular in warmer climates, and this is where the two papers that Holladay reported on could cast the most doubt. In fact, the way Holladay reported the remarks of William Miller, the author who presented one of the papers, it sounds like he has no doubt: “The roof sheathing is humid when open-cell spray foam is used,” is how Holladay quoted him.

The two papers were based on computer simulations. In the first paper, Roof and Attic Design Guidelines for New and Retrofit Construction of Homes in Hot and Cold Climates, the authors used HERS BESTEST and AtticSim. In the second paper, A Hygrothermal Risk Analysis Applied to Residential Unvented Attics, the authors used MATLAB and WUFI.

And that’s as far down that path as I’m going. As promised in the title of this section, I’m going to condense this issue, so to speak, down to its essence. If you’ve read Holladay”s article and looked at the 77 comments, you may end up hopelessly confused. It’s really not that difficult, though. (OK, it is really, but my plan is to make it sound like it’s not by giving you just what you need to know.) Let’s dive in.

Some houses with open-cell spray foam installed on the underside of the OSB roof sheathing have had moisture problems. The OSB got wet and rotted. But where does the moisture come from?

The authors of the first paper cited a study in South Carolina where the relative humidity in the attic was way too high in summer – 80 to 100%. They didn’t know where the moisture was coming from so they speculated that some was coming from above the roof and some from below.

The moisture from above, they thought, comes from rain and dew on the shingles migrating inward and then being forced farther inward during the day by solar vapor drive. It hits the OSB roof sheathing and keeps going through the foam into the attic air. At night it goes back through the foam to the OSB. The next day, even more moisture is driven inward.

There are two problems with this hypothesis. The first was stated eloquently by John Semmelhack in his comment (#9) to Holladay’s article: “IF this were the main driving force, wouldn’t closed cell foam be even worse, since the moisture would be driven into the OSB, but stopped (more or less) from drying to the inside?” Yes, it certainly would. The second problem is that it doesn’t fit with what we know now. Joe Lstiburek, principal of Building Science Corporation, previously thought moisture from above could be a problem with spray foam. Then they did a study in Houston showing otherwise. The photo above shows the house where they did the year-long study. As you can see, they used several different roofing underlayment materials, some vapor impermeable and some vapor permeable. “Turned out that there was no measurable effect of roofing underlayment permeability on inward moisture drive through the roofing assembly,” he wrote in his latest ASHRAE Journal article, Cool Hand Luke Meets Attics.

So, it makes sense that moisture from above wouldn’t be the culprit. We have some evidence from the field that that’s not it, and if it were the problem, closed-cell spray foam would rot out the OSB even faster.

Moisture from the attic

Another possiblity is that the moisture is infiltrating into the attic from outdoors. Ah! That’s an easy one. If that’s the case, and William Miller proposes that as one possibility, then the spray foam installers didn’t do their job. The biggest benefit of spray foam insulation is its air-sealing quality, so if air is infiltrating into a spray-foam attic, then the installers missed some spots and need to go back and make it right.

Moisture from the house

Picture this: You take a shower but forget to turn the bath fan on. Or you turn it on but, as is commonly the case, it removes only about half the air it’s rated for. The bathroom fills with steam.

Water, H2O, has a molecular weight of 18. When that steam comes out of the shower, it’s going to reduce the average molecular weight of the volume of air containing it to less than 29. Watch the steam. Where does it go? Up! It’s more buoyant than the surrounding air, so it rises. (Yeah, yeah, it’s pushed up by the more dense air below, just like in the stack effect. But it still rises.) In a normal household where the occupants take a few showers and do some cooking, some of the water vapor may well find its way into the attic.

Moisture generated indoors or that infiltrates into the home is responsible for the bulk of the moisture in an attic insulated with spray foam on the underside of the roof sheathing. It’s not coming from above the roof and it’s not some new moisture source resulting from the spray foam.

So what do you do to make sure your roof insulated with open-cell spray foam won’t rot? You deal with the air in the attic; that’s what. If you haven’t read it yet, I recommend Lstiburek’s latest article, Cool Hand Luke Meets Attics. He opens:

In what is turning out to be an unfortunate turn of phrase, the terms “unvented
attics” and “unvented roofs” have entered the lexicon. A lot of the blame for that goes
to me, and for that I am sorry. The “right” terms should have been “conditioned attics”
and “conditioned roofs.”

He then explains in the article some of the problems I’ve described above but also gives the solution. The easiest solution, he says, is “just add a supply and return to the attic space and be done with it.”

The problem with that solution, though, is that it violates the building code for an attic with exposed spray foam insulation. It’s OK to leave the foam exposed in an attic if you cover it with an ignition barrier. If you directly condition the attic, however, now you need a thermal barrier, and no builder’s gonna do that.

Lstiburek is working to fix the codes, but unfortunately, it won’t happen till the 2018 cycle at the earliest. He gives a couple of other suggestions, though, to help you work with the current messy situation, and I’ll refer you to his article for those.

The conclusion to draw from all this is that it’s best to be skeptical of modeling studies not backed up by field studies, especially when they seem to contradict experience. Yes, some homes with open-cell spray foam have had moisture problems. Many more have performed perfectly well.

Open-cell spray foam is not the enemy. It has its strengths and weaknesses, just as any building material. You don’t have to be worried about using it. You just need to know how to do it right.

There you have it. Open-cell spray foam is a perfectly acceptable insulation product to use in attics. Do it right, and your roof will NOT rot.

Beware of Roofers in Homes with Spray Foam Insulation