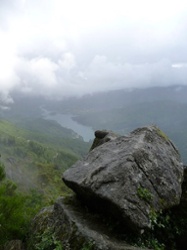 I guess you could call me a contrarian. I usually go in the opposite direction from the crowds. In 1997, for example, I spent two weeks in Portugal, where most people head for the beaches south of Lisbon. Instead, I headed north and inland and ended up in a beautiful little town called Bragança and discovered the Peneda-Gerês National Park, an incredible jewel on the border of Portugal and Spain. The little village of Rio de Onor in the park is a magical place that takes you back to a way of life that vanished centuries ago everywhere else.

Similarly, I’ve learned a lot about homes by visiting places that people normally avoid. One thing I’ve learned is that architects and home designers over the past three decades grabbed hold of a feature that has had a huge negative effect on home energy efficiency and comfort – that is, melding living space and attics. By putting unconditioned attic spaces right next to the conditioned space in a house, designers necessitated the use of the attic kneewall. see why attic kneewalls must perform better to keep the house comfortable and efficient.

Unfortunately, if you have a bonus room or FROG (finished room over garage), you may be aware that rooms with attic kneewalls are often a liability. If you’re a contrarian like I am, you may have even made a little visit to the other side of those walls and seen something like the photo to your right or the one below.

The two main problems here are that: Where the first problem occurs, the insulation is doing nothing. It may be rated R-13 or R-19, but it performs as R-0 because the unconditioned air goes right around it. The second problem, lack of sheathing, degrades the performance so that an R-13 batt may perform like an R-7. Fiberglass doesn’t stop air movement, which is why the R-value comes from testing done on fully encapsulated batts.

If you think I had to look hard to find photos like the two shown here, think again. I’ve got photos like this from nearly every house with attic kneewalls that I’ve been in. Unless the builder certified the house in a program that requires attic-side sheathing or someone fixed the problem later, this is the standard practice for insulating attic kneewalls.

Whether you have this problem in your existing home or you’re building a new home, there are a couple of ways to fix it. First, you could leave the insulation in the kneewall and put rigid sheathing over it, as shown to the in the next two photos.

Here you see foil-faced polyisocyanurate foam board used to sheathe the walls. This pushes the batts up against the drywall and keeps unconditioned attic air out. In this job, which I did about five years ago, we nailed the foam board to the studs and sealed all the seams. moved them to the roofline, and sheathed them with foamboard. These were small attic spaces on either side of a bonus room, and this method made the most sense here.

When you move the building envelope to the exterior wall and roofline, as we did in that house, the attic space now is inside the building envelope and indirectly conditioned. Instead of getting up to 130° F, now it will probably be no hotter than 85° F in summer. Also, what had been attic kneewalls before, separating the house from the extreme conditions of the attic, now become simply interior partition walls. In these last two photos, we used fiberglass batt insulation and foam board at the roofline. A more common way that this is done these days is with spray foam insulation. The choice of materials and methods should be determined by what works best and makes the most sense in a given application. Don’t forget that the process is more important than the products.

I should have said something above about the location (Atlanta, GA) and choice of materials (Rmax R-Matte, 1/2″) for this work, especially since I used photos from work I did 5 years ago when I was far less careful about thermal barriers and condensing surfaces.

The two jobs I showed in the article were small jobs that didn’t require permits, so there was no inspector to tell me I needed to add a thermal barrier over the R-Max foam board I used, and I hadn’t educated myself on thermal barriers enough to know that I needed one. Rmax doesn’t have the approval to be used as a thermal barrier and shouldn’t be left exposed, though. If I were still doing contracting work like this, I’d use Dow Thermax, which does have the 15 minute thermal barrier rating.

On the subject of condensing surfaces, I don’t like putting vapor barriers on either side of a wall in our climate (IECC climate zone 3). It’s wrong half the year no matter which side you put it on. We don’t have plastic under the sheetrock like homes in cold climates, though, so the foil-facing vapor barrier on the exterior still allows the wall to dry to the inside. At R-3.2, the foam board I used will keep the inner surface warm enough to prevent condensation here in the Atlanta area.

Speaking of foam board and condensing surfaces, Martin Holladay, the Energy Nerd at Green Building Advisor, recently wrote an article about how to figure out how much R-value you need when adding foam board sheathing to a wall.

How to Sheathe an Attic Kneewall — And How Not to