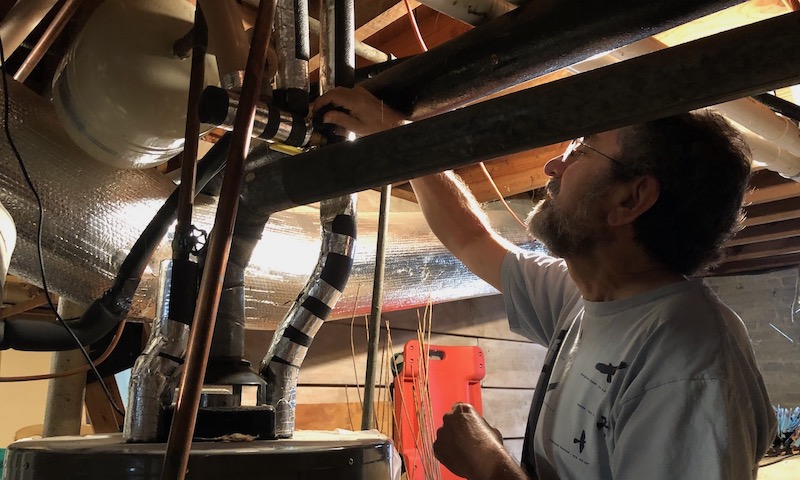 David Wasserman and I worked together at the Southface Energy Institute back in 2007-08 and have been friends since then.  Before Southface, he was an engineer at Oak Ridge National Lab.  We also call on him for occasional help with some of our HVAC design work at Energy Vanguard.  He knows his building science, especially the mechanical side.  So when he recently posted a comment about the hot water system retrofit he’s done on his own house, I wanted to see it.

The article where he posted that comment is the one I wrote about why it takes so long to get hot water in your house.  The basic problem is that a lot of hot water pipes are both too long and too big in diameter.  In the article I wrote about my own house, where it currently takes two and a half minutes to get hot water at the kitchen sink.  I can reduce the length of the pipe to the kitchen, but it’s the diameter that’s killing me.  I’ll fix mine before long, but Wasserman has already done something about his slow hot water.

I went over to his place last weekend, and he showed me what he’s done.  That’s him in the top photo pointing out the addition to his hot water pipes, with a closeup below.  It’s really simple.  His existing hot water lines are all 3/4″ and 1/2″ copper pipe.  With the low-flow fixtures used in homes now, those pipes are too big.  He didn’t remove them, though.  He simply added a second, smaller pipe for three of his hot water runs

In the photo above, his hand is right in front of the original hot water line coming off the top of the water heater.  To the left of his hand is a short manifold he made out of copper pipe and copper tees (details below).  Near his thumb is a cutoff valve for the three new hot water runs.  Since it’s parallel to the manifold, you can tell the valve is open and the hot water goes that way.  The three new runs go up from that manifold.  They’re made of 1/4″ PEX tubing, which you can’t see except for one little gap because they’re insulated.

In case you can’t see all that in the photo above—and it IS hard to see with the pipes all covered in thick insulation—the annotated version of the photo below should help.  The numbered lines are the new 1/4″ PEX lines he installed between the manifold and the three hot water taps.  (You’ll have to look closely to see the word “valve.”  I couldn’t find a color that stood out any better there.)

Those three PEX pipes go to three different parts of the house.  The photo below shows one going into a bathroom.  Since he doesn’t want hot water going through both pipes, he installed valves for the old runs near where the new run connects to it.  Perpendicular to the pipe indicates that that one is off, and all hot water is coming through the 1/4″ PEX pipe.  The other two runs are set up the same way.  Simple, right?

And how well does it work?  He said it used to take over a minute to get hot water to his kitchen faucet.  With the hot water system retrofit, it takes about 8 seconds.  I verified that when I visited.  They hadn’t used hot water in the kitchen yet that morning, so I turned on the tap and counted out, one-one thousand, two-one thousand…  When I got to 7 seconds, the hot water was there.

The details about his retrofit

If you’re interested in what parts he used and the other details, here’s what he wrote in his comment on the other article.  The links are to the parts he used.

Caution:  Prescriptive plumbing codes don’t allow pipes as small as 1/4″ so you may need an engineer to help if you want to go that small.  You need to know the flow rate required at the end of the line. To use 1/4″ PEX tubing, it should be about 1.8 gallons per minute or less. Also, if you need to run the PEX more than 25 feet, you’ll need to go to a larger size, too.  To get a better handle on what you need, use this plastic pipe design calculator.

There you have it.  David Wasserman’s method to retrofit the hot water distribution system works well in his old house. If you’re worried about this retrofit not meeting the code, which requires 3/8″ minimum pipe, Wasserman said:  “Code requires you to put in over-sized piping but it does not require you to use them!”

The 3 Types of Energy Efficiency Losses in Water Heating