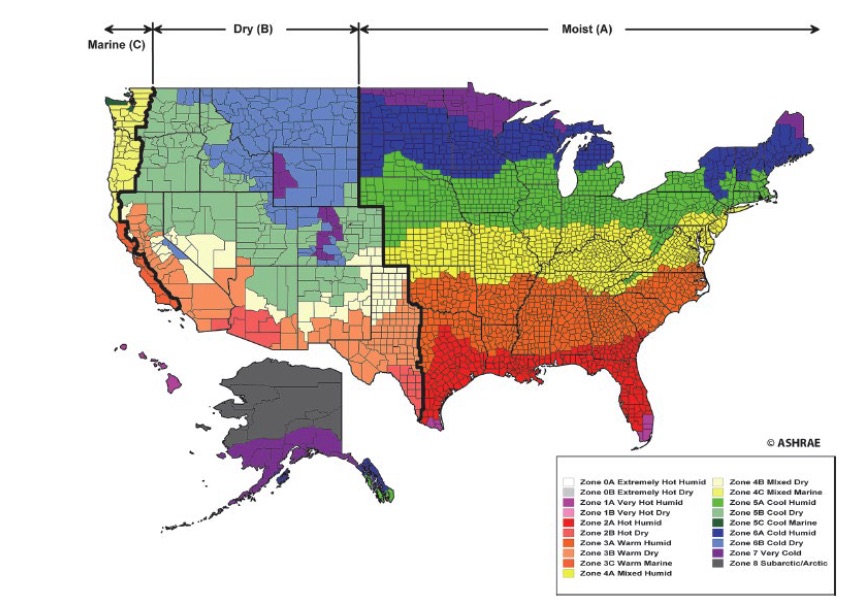 Climate zones for energy code purposes are defined in the International Energy Conservation Code (IECC).  Every three years, that code gets updated.  The map that was in the last version of the IECC, which came out in 2018, had been the same since 2003.  The 2021 IECC, however, shows that climate zones are getting warmer in a bunch of counties.

The climes they are a-changin’

The map above shows a colorized version of the 2021 IECC climate zone map.  For comparison, the 2018 map is below.

It’s a bit hard to go back and forth between the two maps and catch all the changes, so the Pacific Northwest National Lab put together the version below showing which counties have changed and how they changed.  The white counties are still in the same climate zone.  The red ones have moved to warmer climate zones (lower numbers) and the green to cooler climate zones (higher numbers).

As you can see, there’s a lot more warming than cooling.  It’s interesting that nearly all of the counties that moved to cooler climate zones are in Oklahoma.  The big warming changes are in the upper Midwest.  Wisconsin wins the award for the most change.  It no longer has any counties in climate zone 7.  The Upper Peninsula in Michigan also lost all of its CZ-7 counties but still has a toehold in that zone because one of the CZ-6 counties flipped to 7.  Minnesota, which was about half CZ-6 and half CZ-7 now has some CZ-5 in the south and about a third of the state in CZ-7.

What do these changes mean?

First, of course, these changes show that the climate really is changing.  The folks who update the IECC are builders, code officials, manufacturers, and other stakeholders in the construction industry.  Yes, there probably are some who talk about the “climate emergency,” but on the whole, I’d say this is a pretty conservative group.  The IECC climate zones are based on actual numbers for heating and cooling degree days.  This is a fact-based change.

Second, the changes mean that the counties moving to warmer climate zones may have to put in less insulation, do less air sealing, and generally have an easier time meeting their energy code.  Of course, this all depends on whether or not those counties have adopted the IECC, which is a model code.  What actually happens depends on what the states and smaller jurisdictions adopt (and enforce).  In Georgia, we just went on the 2015 IECC two years ago.  If past is prologue, we’ll think about adopting the 2021 IECC in another four years or so.

In short, the International Energy Conservation Code, using real data, has established that climate zones are getting warmer.  That has implications for homeowners, builders, manufacturers…everyone, really.  None of us can escape the Earth’s climate.

Note:  I found out about this change recently in an article by Clay Dekorne in the Journal of Light Construction.  Since then, Green Building Advisor published an article on the topic, and I found one from March by JR Babineau at Johns Manville.  See those articles for more details than I’ve provided here.