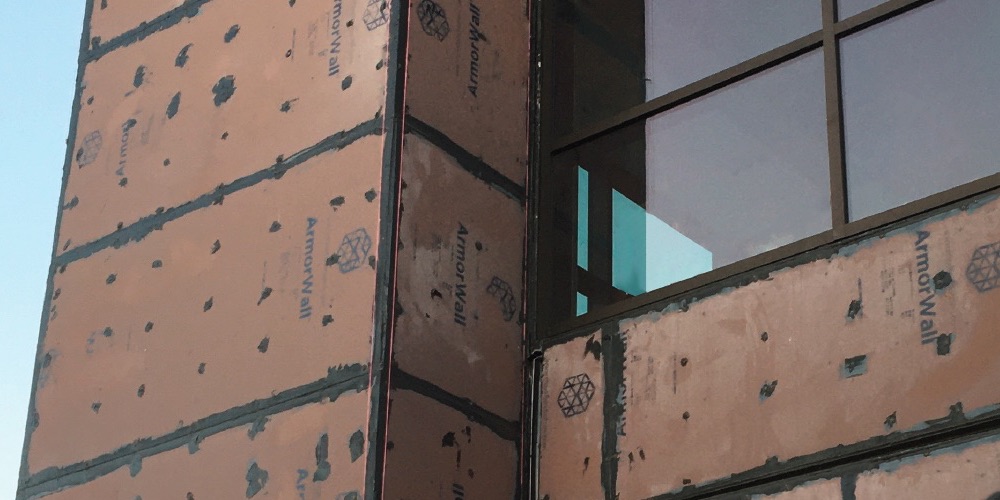 Building enclosure control freaks know that a good exterior sheathing can make a huge difference in performance.  Controlling the flows of moisture, air, and heat requires good control layers.  A lot of materials and methods will get you there, but some make it easier than others.  Others make it harder.  For example, at the time I took that photo below, the builders had framed and sheathed this multifamily building in Atlanta yet had made next to no progress on the control layers.

Contrast that building with the one in the lead photo above and the last photo below.  Those buildings are sheathed with ArmorWall Plus, a relatively new sheathing you may not have heard of yet.  Before getting into the details, notice that the seams between sheets of sheathing are sealed, as are the fastener penetrations.  The mostly OSB sheathed building above most likely had house wrap put on the outside.  It was probably taped at the seams and may be doing an OK job controlling liquid water but overall is probably not very airtight.

What building enclosure control freaks want to know is how the enclosure is going to control the flow of liquid water first, then air, then water vapor, and finally heat.  ArmorWall Plus controls all of those flows and works in all climates.  Here’s what ArmorWall Plus includes:

Let’s look at the various components.

The MgO sheathing provides the structural support the building needs.  Magnesium oxide, also called magnesia, is only one component in the board.  MgO is an ancient cement that has largely been replaced by Portland cement.  The MgO is mixed with other materials to make a type of concrete sheathing.  MgO board is also fire-rated and can reduce costs in some cases by eliminating a second layer of gypsum board.

The exterior coating is proprietary and MaxLife Industries, the manufacturer, says it’s the first one developed just for MgO sheathing.  They also claim the coating bonds covalently to the MgO board.  It’s not a coating held onto the board by an adhesive, which can fail and be peeled off.  The chemical bonds between the coating and the board make the coating part of the board.

On the interior side of the board is a poured polyurethane insulation.  It’s like closed-cell spray foam but poured and with about the same R-value (6.5 per inch) and low vapor permeability.

The MgO board, the exterior coating, and the back-side insulation form one really strong sheathing panel.  The MgO board is a cement board that doesn’t crumble like gypsum.  The coating is chemically bonded to the board.  Polyurethane is used as an adhesive in the modular building industry, so the insulation is strongly connected to the board.

The liquid water and air control layers are the two most important control layers and they’re both handled by the coating on ArmorWall Plus.  The sealant connects the air and water barriers from panel to panel.  Of course, the sheathing by itself is never the full story with controlling water and air.  It’s what happens at the edges of the sheathing that matters most.  Leaks usually happen at the intersections of walls and roofs, walls and foundations, walls and windows/doors, and at penetrations through the sheathing.  To get a good, robust building enclosure that stops liquid water and air, you need a complete plan to integrate all the components.  The pen test is a good tool to help with that.

A lot of people get confused by how best to handle water vapor.  Some get confused by materials that are often called a vapor barrier but usually aren’t.  House wrap is the notable example there.  Even more haven’t gotten the word that water vapor is rarely the problem when a building enclosure suffers moisture damage.  Liquid water leaks and air leakage are the two leading causes of moisture problems, which is why they’re the two most important control layers.

Here’s the basic principle you need to understand about controlling water vapor:  It’s more important for building assemblies to be able to dry than it is to stop the diffusion of water vapor.  It’s OK to have one part of an assembly that stops water vapor as long as it’s not in the wrong place within the assembly and you can still dry to either side of the impermeable layer.

ArmorWall Plus has the impermeable layer at the polyurethane insulation on the back side of the sheathing.  The MgO board itself is vapor permeable so it can dry easily.  The coating has a variable vapor permeance that increases the wetter things are.  If water does find its way into the MgO board, it can dry to the outside through the coating.

The continuous insulation on the back side won’t get absorb water so it’s fine.  If the sheathing is attached to a framed wall with cavity insulation and drywall, you need to be careful about the materials used there.  Most insulation materials will work fine in the cavity as long as they’re vapor permeable.  That’s pretty much everything but closed-cell spray foam and rigid foam.  And then you have to avoid doing the stupid thing of putting polyethylene or some other vapor retarder between the drywall and the studs.

Finally, ArmorWall Plus has poured polyurethane insulation bonded to the back side of the sheathing.  The panels come in three thicknesses with three different R-values.  You can get a 2″ board at R-10, 2.75″ board at R-15, or 3.75″ board at R-21.  The colder the climate you’re building in, the more insulation you’ll want on the outside.  In warm climates, you may be able to get all the R-value you need with one of the two thicker panels.  As you move into colder climates, you’ll need the insulation on the panels plus cavity insulation to hit the required R-value.  Or you could put more continuous insulation (rigid foam or mineral wool) on the exterior of the panels.

Are MgO failures a thing of the past?

The manufacturer of ArmorWall Plus says they’ve solved the problems with MgO board failures.  They say they’ve figured out the chemistry and have much more rigorous quality assurance and quality control procedures in place to prevent the problem.  Also different is that the coating on the exterior side and the polyurethane on the interior side should keep the board dry.  Time will tell if they’ve solved the problems that have plagued other MgO sheathing.

A wall sheathing that does it all

I’m impressed with what I’ve seen of ArmorWall Plus.  It can save on labor by having all four control layers handled with one product.  It can save on materials with multifamily buildings because of the fire rating.  It can work in warmer climates with no additional insulation.  And it works on Passive House buildings, too, like this student housing building in Maine.  If ArmorWall Plus can stand the test of time and prove that they’ve solved the problem of Mgo failures, I think a lot of building enclosure control freaks are going to like this product.