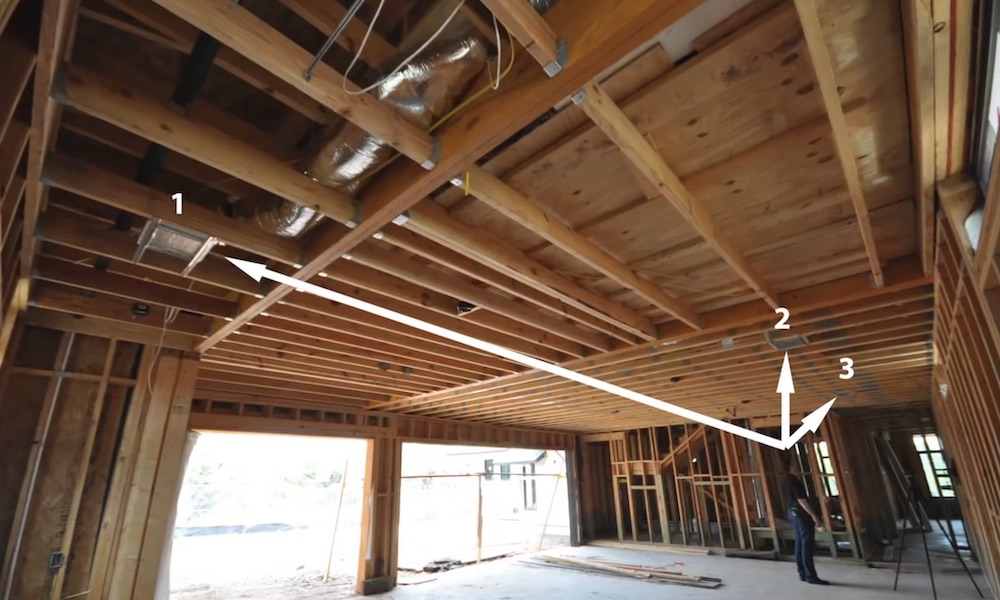 Now, the first mistake here may be adding air conditioning to the garage in the first place.† Most of the time, a garage is used simply as a garage. That is, the homeowners store cars, lawn mowers, high school yearbooks, a Smoking Donkey cigarette dispenser, a “time capsule” in a shrimp factory box that you’ve had since your first job in high school, and that old Mr. Microphone. (Hey, Good Lookin’, we’ll be back to pick ya up later!)

If it’s just going to be used as a garage, there’s no need to air condition it all. It’s a waste of energy that will provide the owners little if any benefit. If they’ve got some really valuable stuff that can’t take the heat or humidity out there (like that Mr. Microphone), then bring it into the house.

Why is it a waste of energy? Because cars, lawn mowers, and junk don’t need to be air conditioned. Also, standard roll-up garage doors aren’t insulated or air-sealed, so you’re paying to condition space that’s constantly reheated by Mother Nature.

Are there good reasons to air condition a garage? Sure. If I’m a woodworker and don’t care if my cars sleep in the driveway, I’d air condition my garage in Austin. Or if I want to turn it into a mancave, momcave, or teen hangout space, it’s definitely gonna chill. Or maybe you can’t build a house in a certain price range or Austin neighborhood without air conditioning the garage and have any hope of selling it.

OK, so let’s say you’ve got a good reason to air condition the garage. That’s fine, but you should absolutely never, ever do it the way they did here. Matt Risinger, an Austin home builder who owns Risinger Homes and does things the right way, explains why in the video below.

The big potential problem here is bad indoor air quality. Let me show you why. An air conditioner is supposed to be balanced in its air flow. A 3 ton AC pulls 1200 cubic feet per minute (cfm) of air (nominal) from the conditioned space and then puts 1200 cfm of air back into the conditioned space.

What Matt showed above is a system that puts maybe 400 cfm of air into the garage. It’s still pulling 1200 cfm from the house (assuming a 3 ton system) but only has 800 cfm left to put into the house.

Hmmmm. 1200 out, 800 in. That’s like having a 400 cfm range hood running whenever the AC kicks on. That’s gonna depressurize the house.

One of the basic rules of air flow is that for every cfm in, you’ve got to have another cfm out, and vice versa. So if the AC is pulling 1200 cfm from the house and putting 800 back in, it’s got to find another 400 cfm somewhere. It does that, as Matt said in the video, by pulling from the garage, under the walls, through the can lights, and also down a gas water heater flue if the house has one.

That last one is potentially deadly. If the air conditioner pulls air down the flue while the water heater is firing, that means the exhaust gases aren’t going up the flue. That’s called backdrafting. It can put carbon monoxide into the house and into your lungs while you’re sleeping. Not such a good idea, eh?

If that’s not enough for you, how about the fact that the building code doesn’t allow it? (Thanks, Sean!) Just because it’s not allowed doesn’t mean it doesn’t happen, as the video shows. Building inspectors don’t catch everything.

The right way to air condition a garage If you really must air condition a garage, you need to install a separate system for the garage only. The best way to do this is with a mini-split heat pump or air conditioner. It’s perfect for this application because it’s small, doesn’t require ducts, is very energy efficient, and can be turned off when you don’t need to cool that space.

The photo at left shows a ductless head at rough-in of a house (not a garage but you get the idea). If you build the garage well and size the system properly, one head should do the trick.

Of course, another, less expensive, option would be to use window units. They’ll do the same thing for less cost. You’ll get more noise and lower efficiency, but if it’s not used much, that’ll probably be acceptable.

There you have it. As with most things, there’s a right way and a wrong to air condition a garage. Then there’s the question of whether you should be air conditioning it at all.

† I had an interesting discussion with a trio of upstate New Yorkers on Facebook recently when I posted Risinger’s video there. They were horrified that anyone would even consider air conditioning a garage. I pointed out that the US uses more energy for heating than for cooling and that sometimes people in cold climates heat their garages and put heat strips in driveways, sidewalks, and roofs. That didn’t go over so well with two of them. Had we not had that discussion, however, this article may have just been about mistake #2 above, so thank you, Blake, Matt, and Dale. I’d really hate for Energy Vanguard to be thought of as “Energy Waste Vanguard.”