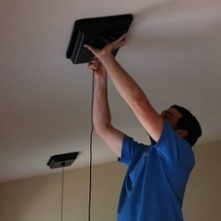 Duct leakage testing has come a long way. We’ve gone from doing the subtraction method with blower doors to having specialized duct pressurization blowers. We’ve also evolved in how we seal the ducts for a test, going from kraft paper/masking tape to duct mask to vent caps. The last item in that list is made by Vent Cap Systems (VCS) and can simplify your life as well as reducing your cost and the amount of plastic waste you produce.

Duct leakage testing has come a long way. We’ve gone from doing the subtraction method with blower doors to having specialized duct pressurization blowers. We’ve also evolved in how we seal the ducts for a test, going from kraft paper/masking tape to duct mask to vent caps. The last item in that list is made by Vent Cap Systems (VCS) and can simplify your life as well as reducing your cost and the amount of plastic waste you produce.

We have a set of vent caps that we’ve used in our HERS rater classes and in the quality assurance we do for our raters. In full disclosure, I have to tell you that Vent Cap Systems gave us the set to get exposure for their product. I can also tell you that what I write here wouldn’t be any different had we paid full price for them. Duct mask costs about $25 a roll. If you do a lot of testing—and more and more state energy codes are requiring it—you can go through quite a few rolls, spending hundreds of dollars each year for a product you use once and then throw away. I wish I’d taken a picture of some of the soccer-ball sized wads of used duct mask I had to throw away after testing a house. Using vent caps greatly reduces the waste. (In a lot of houses, you still have to use some duct mask.)

I also like how quick it is to install and remove them. As with anything, it takes some practice, but once you get the hang of it, using vent caps can cut your duct leakage testing time in half.

One of the things that makes vent caps quicker to install is that in many homes, you can leave the ladder in the truck. VCS sells what they call a Remote Attachment Tool (RAT), which screws onto the end of a painter’s pole. Check out the video below to see how it works.

Another cool thing about vent caps is Corey Breed. He’s the owner of Vent Cap Systems and the brains behind the ideas embodied in the products. Every time I talk with him, he tells me about the improvements he’s making and the new products he’s developing.

Yet another advantage is the greatly reduced likelihood of pulling paint off of walls, ceilings, registers, or grilles. That does happen occasionally with duct mask, especially in older homes or where they’ve painted the registers and grilles without a good primer.

As with any product, vent caps still have some room for improvement. They work great on flat ceilings, for example, but not so well on vaulted ceilings when you’re trying to do it with the pole RAT. Similarly, even with a long extension pole, you’ll still need a ladder for really high ceilings. The photo above shows an example of having to use an 8′ ladder and a pole for a QA rating I did earlier this year. Yeah, you can do it with the vent caps, but using duct mask on a paint pad on a pole would have allowed me to do it without the ladder. The main problem here is that the cord isn’t long enough, so it’s a fairly easy retrofit…if you have the cord on-hand or prepare a few of your vent caps ahead of time. Knowing Corey, though, he’s probably already working on a solution.

Vent caps do work on floor vents, but you probably need to put some weight on top of them to get a good seal with the weatherstripping. On carpeted floors, you’ll probably need even more weight and still won’t get a great seal. The ENERGY STAR new homes program, by the way, is allowing you to seal the boot on carpeted floors when you test Version 3 homes under Revision 07 (pdf).

If you do duct leasting testing on new homes at rough-in, these vent caps won’t work for you either. I believe Corey is working on a solution for the latter deficiency, too.

You won’t regret getting a set

If you do a decent amount of duct leakage testing in finished homes, you need to get yourself a set of vent caps. They’ll pay for themselves in reduced duct mask costs. They’ll cut your time on the job.

One question that some people have is how well the results compare to testing with duct mask. The answer is that you get pretty much the same answer either way. We’ve done a bit of comparison, and the results have been close.

I’ve talked to a lot of raters who use vent caps, and I haven’t found one yet who doesn’t like them. Eric Griffin, the rater whose QA I was doing in the photo above, told me they’ve cut his time doing duct leakage testing in half. “They’re great,” he said. “They changed my life.”

A Great Tool for Checking Insulation in Walls