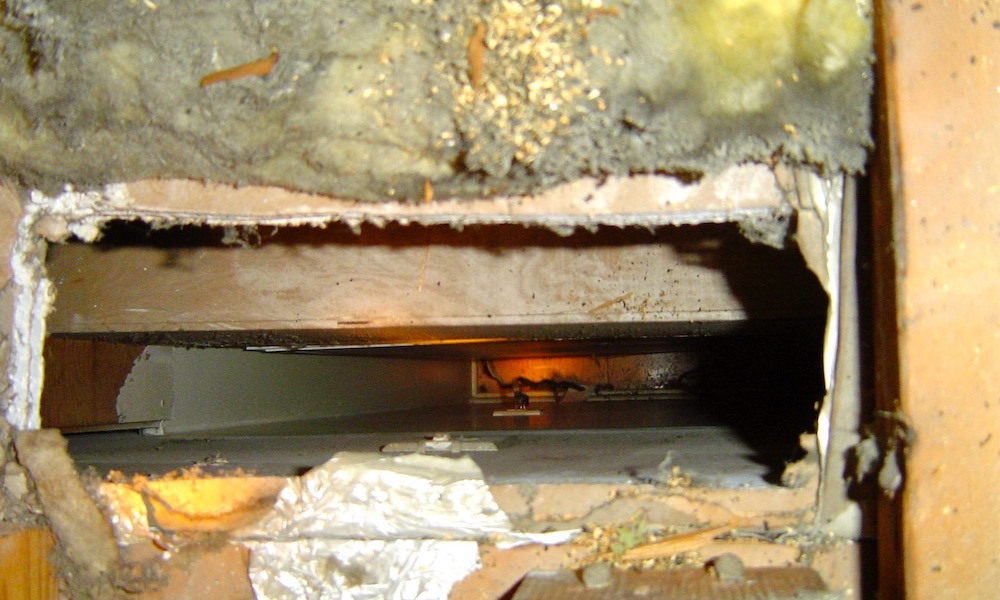 Well, at least don’t insulate your attic until you’ve sealed the air leaks. Most attics have a lot of holes where attic air can get into the house, or conditioned air can be lost to the attic. Don’t you just love the idea of breathing air that got sucked through that dead squirrel in the attic?

The picture above is a huge hole I found in an attic. The homeowners had their kitchen redone a few years back, and evidently the contractor thought that the fridge needed to be vented to the attic. Stupid idea!

When I took the picture, I was standing in the attic and looking down at the back of the fridge. And the hole you see there is only half of it. There was more on the other side of the joist. Huge amounts of conditioned air went straight up into the attic!

The fridge vent is an unusual one, but I wouldn’t be surprised if other houses have it, too. Some of the more common holes in the ceiling are light fixtures, fans, wiring penetrations, and pull-down attic stairs.

An unsealed chase is another type of hole that can be really big, and I see it in a lot of attics. A chase is a cavity through the house that’s meant for ducts, exhaust flues for furnaces & water heaters, and plumbing pipes. Sometimes they go all the way from the basement or crawl space to the attic and are open on both ends.

The picture above shows an unsealed chase with a furnace flue pipe that goes from the basement to the attic. The hole at the top allows hot or cold attic air to go down through the hole and make the house uncomfortable because drywall has very little R-value. That air also finds holes in the chase walls and goes directly into the house.

To return to the title of this post, it’s a wasted opportunity if you just call the insulation contractor out to put more insulation in your attic.  The air leaks are at least as important to your comfort and energy bills as inadequate insulation.  If you don’t seal them first, you’re locking in that air leakage for years or decades.  So don’t insulate your attic…without first sealing the air leaks!