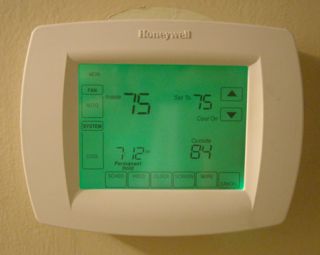 It’s been hot here in the Atlanta area lately. Just three weeks ago we were wearing jackets with low temperatures in the thirties Fahrenheit, and now we’re getting up above our summer design temperature every day. That means that a lot of air conditioners are running as everyone tries to keep cool.

It’s been hot here in the Atlanta area lately. Just three weeks ago we were wearing jackets with low temperatures in the thirties Fahrenheit, and now we’re getting up above our summer design temperature every day. That means that a lot of air conditioners are running as everyone tries to keep cool.

One common question I get from homeowners is: Should I put the fan in the on position? Most thermostats have two settings for the fan – auto and on – and some well-meaning HVAC techs tell their customers to put the fan in the on the position to distribute the cool air in the house better.

Let me back up a bit here. For purposes of this discussion, your air conditioner has two components: the part that cools and the part that moves the air. You adjust the part the cools by changing the temperature setting on your thermostat. You can affect the air movement by setting the fan to auto or on.

One of those settings is better than the other. The photo below shows how my thermostat is set, and that’s how I recommend you set yours, too. The number one reason you don’t want the fan to run continuously is that your air conditioner is probably oversized. Since your AC is responsible for doing two jobs, cooling and dehumidifying, moisture from the air condenses on the cold evaporator coil when it runs. An oversized AC will shut off after a short run time and leave a lot of water sitting on the coil. By running the fan after the coil warms up, a lot of that water will evaporate and be put right back into your home.

So, putting the fan in the on position compounds the error of having an oversized cooling system. Your house will cool down quickly without dehumidifying well. Running the fan continuously makes the dehumidification worse and your home less comfortable.

Update (9/8/14): See my actual data on how setting the fan to the on position raises the humidity.

Even in a dry climate where dehumidification doesn’t matter because there’s little moisture in the air, there are other reasons not to leave the fan in the on mode. First, it costs more because you’ve got that fan using about 300 watts while it’s running, and you’re probably not getting much benefit from it. Good HVAC design in new homes will obviate the need for this if you’re running the fan because of air distribution problems. [See addendum below regarding dry climate fan operation.]

Another reason to use the auto mode is that if you have leaky ducts outside the building envelope, it can add to the air leakage of the house. Depending on the type of duct leakage, you may end up with higher infiltration (air leaking in) or higher exfiltration (air leaking out). In either case, you add to your cooling load and make the home less comfortable.

Here’s another really good recommendation, too. If it’s just too hot out, go find yourself a nice waterfall to cool off in, like I did this weekend. Addendum (6/2/13): If you’re in a dry climate, running the air conditioner for a few minutes after the compressor shuts off can help cool the home more efficiently. You don’t want to run the fan continuously 24/7, though, because that will use more energy than is necessary for the extra cooling and have the duct leakage problems mentioned above if ducts are outside the enclosure. The way to do this would be to install John Proctor’s Western Cooling Control, which Martin Holladay wrote about at Green Building Advisor.

This Thermostat Setting Can Cost You Money and Make You Sick

How NOT to Use Your Heat Pump Thermostat

Do Programmable Thermostats Save Energy?