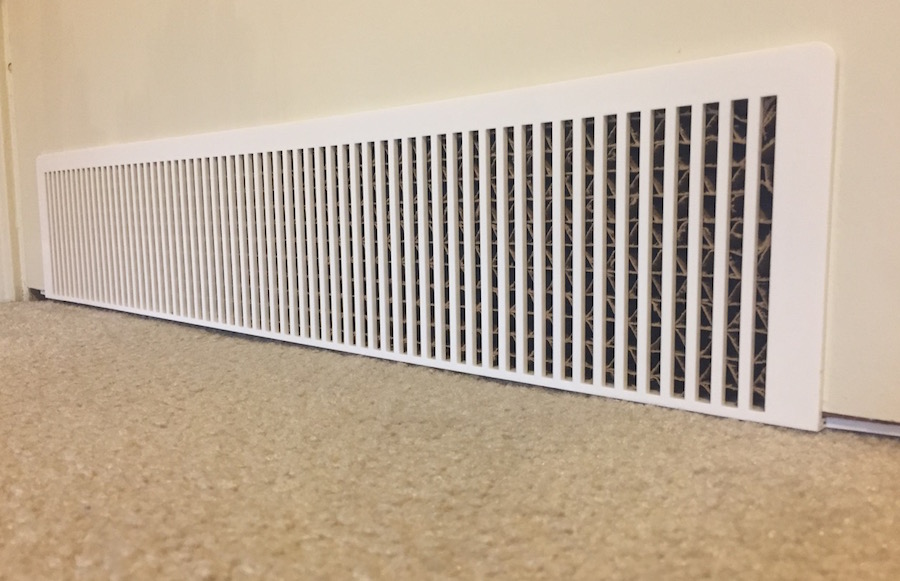 Your bedroom really doesn’t aspire to be a balloon. Yet, because of the way your heating and air conditioning system was installed, it may be acting like one. At least to an extent. It doesn’t expand the way a balloon does, but it does get blown up. Think about it. If your bedroom has a supply vent from your HVAC system but no return vent or other pathway for the air to make its way back to the unit, what happens to that air blowing into the room when you close the door?

The problem with bedrooms

Forced-air heating and cooling systems use ducts to move conditioned air from the furnace, heat pump, or air conditioner back into the living space inside the house. The air that it’s conditioning, though, isn’t just whatever it can get. Ideally, it’s a closed system with as little duct leakage as possible, and the air that it’s conditioning comes from inside the house. The furnace or air handler (AHU in the drawing below) pulls air through the return ducts, conditions that air, and then sends it through the supply ducts back into the house. The problem with bedrooms occurs in houses where the HVAC design did not include return vents in each bedroom. Well, I should say it’s only a potential problem because a good installer will be working from an actual HVAC design, which should specify exactly how air gets back to the air handler. If a home has a central return vent for all the air going to the air handler, a good HVAC design will include return air pathways from the bedrooms. That could be jumper ducts (shown below) or transfer grilles. Door undercuts typically won’t allow enough air to get out of the bedroom unless you leave a gap bigger than most people want under their doors. What happens if you don’t make provisions for the return air from the bedrooms? When the system is running and the bedroom door is closed, the pressure in the bedroom goes up. It becomes positive relative to the main part of the house and probably also to the outdoors. Some of that air will find its way under the door and through interior leaks back to the central return vent. The rest of it, though, will push through openings and leak to the outdoors and into interstitial spaces. It leaks out. You lose air that you’ve paid to heat or cool.

Negative pressure in the house can cause a number of problems:

If you live in a house that doesn’t have dedicated return vents in the bedrooms and there’s also no hint of jumper ducts or transfer grilles, you have another option. Tamarack Technologies makes something they call the Perfect Balance in-door return air pathway.*  They’re inexpensive, easy to install, and they work. Here’s a video showing the pressure difference with and without the Perfect Balance.

I installed these return air pathways in my condo three years ago, and that video shows the one in our guest bedroom, where the positive pressure created by the lack of a return air pathway was the worst. It made a huge difference, dropping the pressure in the bedroom (relative to the hallway) from about 6.7 Pascals (Pa) to about 1.7 Pa. The ENERGY STAR new homes program requires pressure balancing of bedrooms with a maximum pressure difference of 3.0 Pa.

It took me about a half hour to install these things in all three bedroom doors. All I had to do was remove the door from the hinges, place it on sawhorses, trace the outline of the piece using the template provided, cut out the section of the door, screw the piece to the bottom of the door, and then put the door back on the hinges. Bam!

If you’re worried about privacy, the Perfect Balance has a cardboard baffle built in to reduce sound transmission. I’ve lived with them in my condo for three years now and have never had a problem. By getting down on the floor and putting your face up against it, you can see through into the bedroom, but you get a limited, narrow view of the other side.

The best use of the Perfect Balance* is in existing homes where you don’t have returns in the bedrooms and can’t (or don’t want to) install jumper ducts or transfer grilles. If the pressure in the bedroom with the door closed and the air handler running is higher than 3 Pa, this is a great way to retrofit a return air pathway. If you don’t like the look of the Perfect Balance, Tamarack also sells transfer grilles,* which you install in a wall.

The next time your heating and air conditioning system comes on, think about that pressure building up in the bedroom. Imagine where that air might be going. Imagine the kind of air that’s coming in from outside.

It’s time to pop that balloon with a return air pathway.

* These are Amazon Associate links. You pay the same price you would pay normally, but Energy Vanguard makes a small commission if you buy after using the link.