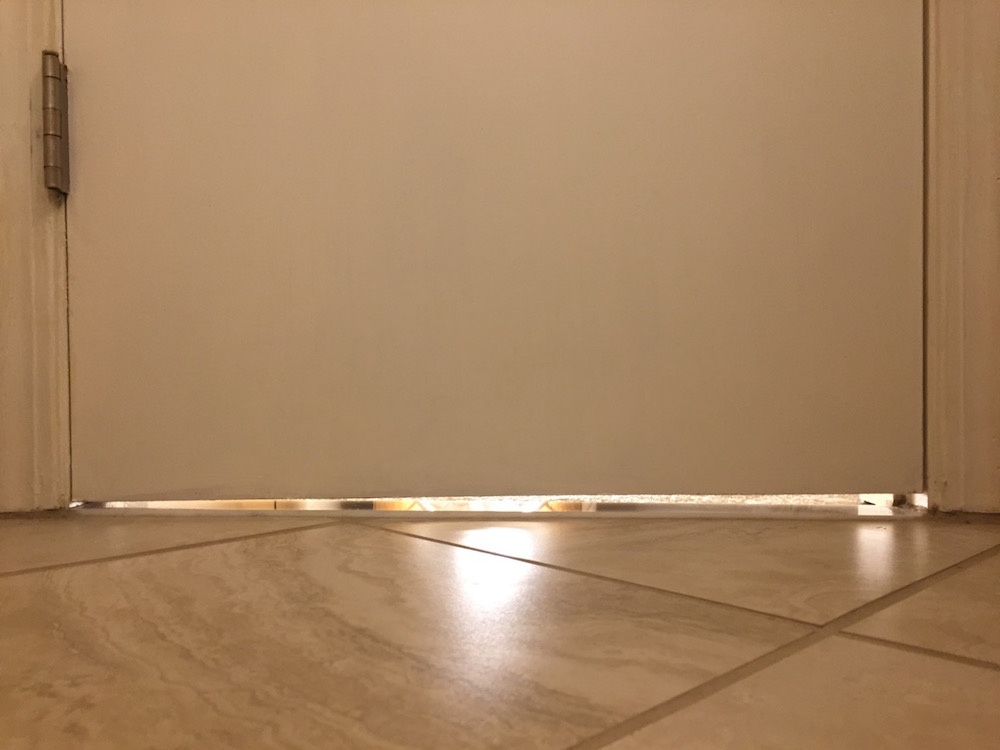 Most people don’t know that simply closing a door in their home can make them sick, increase their energy bills, or reduce their comfort. We live in this invisible stuff called air. We pull many pounds of it into our lungs each day. A typical air conditioner, heat pump, or furnace easily moves 20 tons of air a day. (Yes, I’m talking about 40,000 pounds! We’ll save that calculation for another day, though.) And the simple act of closing a door changes the dynamics of a house in ways that can have profound impacts on the people inside the home.

Last week I wrote about the problem of bedroom doors getting closed, the consequences of that action, and one way to alleviate the problem. In that article I mentioned the issue of undercutting the bedroom doors as the standard method many homes used as a return air pathway. The air pumped into a bedroom needs to find its way back to the air conditioner, heat pump, or furnace. Door undercuts are one such return air pathway. But, I wrote:

Door undercuts typically won’t allow enough air to get out of the bedroom unless you leave a gap bigger than most people want under their doors.

The conventional wisdom on door undercuts

Ah, conventional wisdom. It’s often not wisdom at all and you may get different versions of it depending on which convention you believe. That’s certainly the case here. Talk to people in the HVAC industry and you’ll find quite a few who say you never need anything more than a door undercut. The one comment I’ve gotten so far on the video on bedroom pressures I made for my last article was, “Haha 7 pa is >0.03in wc soooo… Very little. It will sweep under the door.” He didn’t identify himself as such but since he thinks in inches of water column (iwc), I have a strong suspicion he’s an HVAC guy. (I also think the evidence points to the commenter being male but woman’s intuition doesn’t always get it right, even for someone in Who’s Who of American Women.)

That kind of conventional wisdom is why we have homes like my condo, which had a 7 Pascal (Pa) pressure difference before I installed the Tamarack return air pathway in the door. (Disclosure: Tamarack is an advertiser in the Energy Vanguard Blog.) Mike MacFarland of Energy Docs, a home performance contractor in northern California, says it can be even worse than that. He’s found many homes with bedrooms that get pressurized to over 40 Pa when the bedroom door is closed. Wow!

In contrast, the statement I threw out in that last article about the inadequacy of door undercuts represents the conventional wisdom of the building science community. Building Science Corporation has a page about door undercuts as return air pathways and says this:

This approach is acceptable but Building America research has demonstrated that the common technique of undercutting bedroom doors does not provide for enough airflow.

They don’t provide the reference to that Building America research but I think it’s probably a study done by the Florida Solar Energy Center (FSEC). Published online as the Return Air Pathway Study, their report shows the air flow through various types of return air pathways, including door undercuts. The chart below shows the results. They found that a hole the size of a typical one inch door undercut will allow about 60 cubic feet per minute of air flow. In terms of air flow to size of the hole, door undercuts come out on top. They yield about 2 cfm per square inch of hole. (See Table 60 in their report.) But compared to the air flow many bedrooms need, 60 cfm is on the low side. And that’s with a one inch undercut. With a half inch undercut, the number will be reduced greatly. (Unfortunately, they didn’t include half inch undercuts in their study.)

The wisdom of data from real houses

Building Science Corporation and FSEC are right in calling out door undercuts. As I mentioned above, many in the HVAC industry believe wholeheartedly in door undercuts. In many homes they don’t work. Look at the article I wrote last week about what happens in my condo without the Tamarack return air pathways I installed in the doors.

But we also need to understand the bounds of this new understanding about door undercuts. And it’s helpful to know what that FSEC study did not show. Maybe door undercuts work just fine for some houses.

That’s what John Semmelhack of Think Little has found. He commented in my last article, writing “We design and balance systems all the time with central returns and WITHOUT transfer grilles or jumper ducts for most bedrooms.” He finds that a half inch door undercut works just fine in most of the homes he tests.

So, are we back to saying the HVAC folks are right? No, not really. Semmelhack works on high-performance homes. He certifies homes for ENERGY STAR and Passive House and also does some net zero energy homes and deep energy retrofits. That’s the first thing the building science conventional wisdom doesn’t include. When a house is really efficient, the bedrooms won’t need as much supply air delivered.

The other thing neglected by the building science conventional wisdom is the other air flow. When you close a bedroom door, the undercut isn’t the only pathway for return air. Walk over to a bedroom (or other interior) door and close it. Look at the gaps on the sides and top. Grab the handle and see how much movement there is.

And that’s what the FSEC study seems to have missed. They don’t discuss it in their report but it appears from the photos that their only pathway for air flow was the hole they cut. They built a little test hut out of foam board, which I imagine was airtight except for the holes being tested. They didn’t discuss the airtightness of the hut in their report.

Semmelhack is one of the people in our industry who goes out and tests things to make sure they work. It’s required, of course, for ENERGY STAR and Passive House, but he goes further than is required. The graph below shows his data for the pressure difference in bedrooms as a function of the conditioned air supplied to the bedroom. It’s not a tremendous amount of data but it’s enough to see that door undercuts work. For supply air up to about 80 cfm, the pressure stays below the ENERGY STAR required threshold of 3 Pascals (Pa). All of the bedrooms being tested here have only half inch door undercuts as return air pathways. No return vents, jumper ducts, or transfer grilles. And the vast majority meet the ENERGY STAR requirement of <3 Pa pressure difference between the bedroom and the hall. Only two times has he had a problem getting bedrooms under the 3 Pa threshold with 75 cfm of supply air. In both cases, the door was installed really tightly.

As is so often the case, the truth is found between the extremes. Door undercuts are neither always adequate nor always inadequate. Sometimes they work. Sometimes they don’t. With low-load homes, the lower air flow required in bedrooms means half inch door undercuts — along with the flow around the sides and top of the door — might well be sufficient. The more air required for a bedroom, the more likely it is you’ll need to put in an additional return air pathway.

Of course, it’s pretty easy to get this right. All we need is proper commissioning. If every home were tested for bedroom pressure differences and held to a maximum 3 Pa, we wouldn’t need to have this discussion.