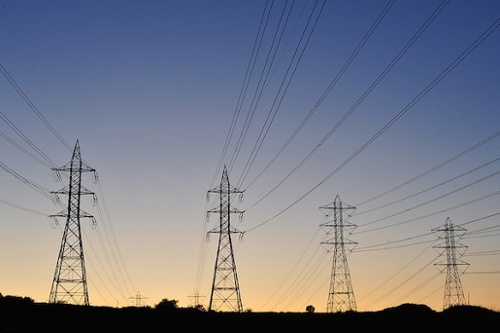 You may think there’s no more boring topic than electric utilities. Power plants. Transmission lines. Engineers with flat top haircuts and pocket protectors full of pens in their white short-sleeved shirts. Well, let me say two words that might help make them more interesting to you: duck curve. If you haven’t heard this term yet, you’re not alone.

A primer on utility load curves

The graph below shows a typical daily load profile for an electric utility. This one’s for a day in New England in 2010, but the basic pattern is clear. Demand for electricity is at its lowest during the night. When people wake up and start their day, demand rises (morning ramp). Then it stays up at a higher level through the day but rises to a peak after work ends and everyone returns home. That’s what a typical day looks like in a lot of places. In addition, there are annual changes and utilities are often classified as either summer peaking or winter peaking. That’s just what you think: which season the utility hits its highest peak load for the year.

Now, what electric utility companies would like their load curve to look like is shown below. If the demand were perfectly flat, a utility’s job would become trivial. (Of course, there’s all that messy stuff about storms and growth and plant outages, but let’s ignore that here.) Push the button and let the generating plants run to deliver that unchanging amount of electricity. They could meet all the load with cheaper electricity from baseload plants and never have to turn on the peaking plants. 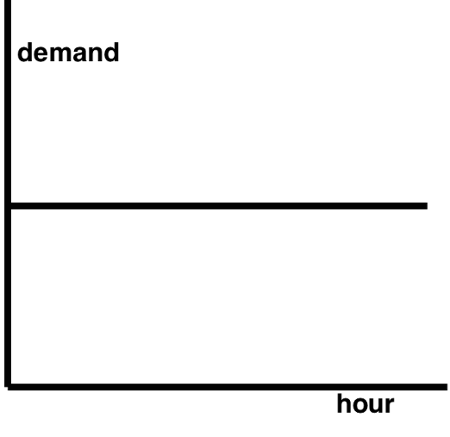 But things are changing, and quickly. California seems to be experiencing it first, but it’s likely to hit other states, too. What’s happening is that cheap photovoltaic modules (a.k.a, solar panels, although that’s ambiguous) are reducing the demand during the sunny part of the day. The morning ramp is flattening out, and now the evening ramp is getting steeper. The chart below shows the trend, actual and projected. (See Greentech Media for more on the duck curve.) As you can see here, the load during the middle of the day gets smaller because of all the PV-generated electricity entering the grid. As that electricity starts dropping off in late afternoon and evening, the evening peak begins to hit. That means that utility power plants that had been resting during the PV-saturated afternoon hours suddenly need to ramp up quickly. As you know, any large-scale operation has trouble turning on a dime, so the duck’s neck in the evolving load profile presents problems.

The world of electricity generation is changing rapidly. From smart meters to microgrids to the Tesla Motors Powerwall, there’s a lot happening. The duck curve is an indicator.

Matt Golden, a policy guy in California who came from the home performance world, raised the issue of dramatic change in a comment on one of my LinkedIn articles. In it, he talked about the “new world where EE [energy efficiency] is dead.” (There’s more to it than meets the eye, though, so don’t rush to judgment here yet.)

Could that be true? Will the duck curve kill energy efficiency? Or instead, is it time “to declare hunting season on the Cal ISO’s duck chart,” as a retired California Public Utility Commissioner suggested.

I’ll be taking a deeper look into this issue next week, so be sure to check back then. (Or just put your email address in the box at the top of the page and you’ll get a notification when the article comes out.)

Must the 3 Little Pigs Die?

Photo of transmission lines by Chris Hunkeler from flickr.com, used under a Creative Commons license.