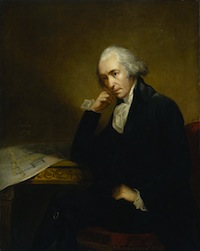 I like James Watt as much as the next person. He was one of the people whose inventions helped advance the Industrial Revolution with his refining of the steam engine. He invented an early copying machine. And he was Scottish. (Now you’ll have to read this whole article in the mellifluous accent of Fiona Ritchie.) I feel closer to my Irish roots than the Scots-Irish, but a man named Allison can never escape his Scottish heritage.

I like James Watt as much as the next person. He was one of the people whose inventions helped advance the Industrial Revolution with his refining of the steam engine. He invented an early copying machine. And he was Scottish. (Now you’ll have to read this whole article in the mellifluous accent of Fiona Ritchie.) I feel closer to my Irish roots than the Scots-Irish, but a man named Allison can never escape his Scottish heritage.

Why should you care about James Watt? Because his name is now used for arguably the most confusing unit in our field, that’s why. Let’s work our way up to that, though, and start with energy. That’s something that seems fairly obvious, right? It’s what makes everything go. It’s the stuff that makes things happen. It’s in the gasoline we put in our cars, the food we eat, the natural gas that heats our homes, and the electricity that’s allowing me to type this article in Tucker, Georgia so you can read it in Cincinnati or Santa Fe or Cork.

Actually, energy is a pretty abstract idea, and it took physicists a long time to figure it out. It’s not like motion, which we can see, or force, which we can feel. And the fact that it appears in such different forms—chemical, mechanical, electrical, gravitational, and nuclear—made it all the more difficult to understand. (James Clerk Maxwell, another Scot, showed that electricity, magnetism, and light were all related and has a set of four famous equations named after him as a result.)

Now that we do understand it, though, we still have the problem of physicists. Yes, we physicists have a knack for making the ideas of physics more difficult than they need to be, and we’ve certainly done that with energy, the quantity, and power, the rate at which we use energy.

When you get your electric bill each month, you’re not paying for power, even if some people call it a ‘power bill.’ You’re paying for the amount of energy you used. Power is how fast your meter is spinning right now, how much energy you’re using per second or per hour. It’s the difference between a quantity (energy) and a rate (power).

Some units we use for this make perfect sense. For energy, we have: British Thermal Unit (Btu), calorie, and joule. For power, all we have to do is turn those energy units into rates by dividing by a time unit: Btu/hour, calories/minute, or joules/second.

All was right in the world of energy and power units until 1889, when the Second Congress of the British Association for the Advancement of Science adopted the watt as a unit for power. Not energy, mind you, where it would make more sense, but power, where it disguises itself by hiding the time unit. A watt equals a joule per second.

The result is that the energy unit has time in it:

So, if you have a 24 watt CFL (the replacement for the 100 watt incandescent light bulb), it uses 24 joules of energy for each second that it’s turned on. You don’t get billed for the rate at which you use energy, so you have to factor in the time. If you leave that light on for one hour, which is 3600 seconds, you’ll pay for:

That’s NOT 24 watts per hour, as some people like to say. It’s 24 watt-hours, a quantity of energy used. Because the watt has time hidden inside itself, the time units can cancel out, leaving only energy. But the electric utilities decided to keep the confusion going and bill us for energy used in kilowatt-hours.

Tread carefully when you’re dealing with watts. They’re not watt they seem.