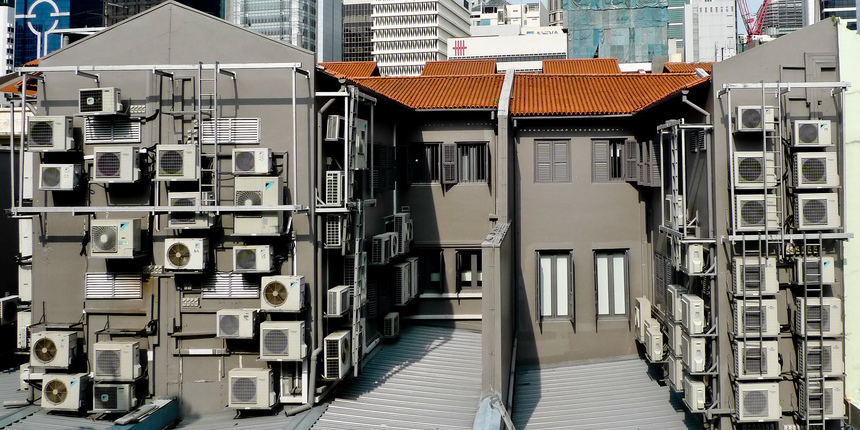 Sometimes a house just needs a lot more air conditioning than building officials want you to put in, right?*  It’s better to be safe than sorry, so having extra heating or cooling capacity can be a good thing.  Today I’m going to show you how to cheat on a Manual J load calculation, which gives you the heating and cooling loads for a house.

I’ve done quite a few load calculations since my first one in 2004.  I’ve looked at a whole lot more in the process of doing quality assurance for energy efficiency and green building programs.  I’ve also done many presentations and training classes on this topic.  And HVAC design is what we do every day at Energy Vanguard.

Plus, I’ll divulge a little secret here.  I got really good at cheating back in 8th grade.  But what I’m going to share with you here isn’t about putting together a cheat sheet that you hide under your leg as I did for that one test.  I’m going to show you the tried-and-true tricks used by the pros!

The first thing to know is that some Manual J inputs have a bigger effect than others.  Those are the ones to manipulate because a little cheating can go a long way.  Here are my top parameters to take your swindling to the next level.

Windows.  Even a good window is significantly worse for heat transfer than a mediocre wall.  A window with a U-value of 0.25 has an R-value of 4.  That’s pretty good…for a window.  But the surrounding wall will have at least R-13 insulation in it.  And there are five good ways to cheat here:

Infiltration rate.  Airtight homes have lower heating loads because they lose less heat through air leakage.  They have lower cooling loads on both the sensible and latent parts because they bring in less outdoor air, which adds latent load in humid climates.  Bump those numbers up, and the heating and cooling loads both increase.  If the builder says the house will be at 3 air changes per hour at 50 Pascals (ACH50), try 8 ACH50.  Those numbers look similar, and the building official will probably miss your deception.

Ducts.  This is a good one because it’s like windows:  You can change them in more than one way to get higher loads.

Occupants.  This one can help you a lot, but only on the cooling load.  Each occupant adds 230 BTU per hour of sensible load and another 200 BTU per hour of latent load.  Need another two tons of cooling capacity on your report?  Just put in 56 occupants.  Boom!  You’re there.  Now that’s how to cheat on a Manual J load calculation!

Appliances.  This is a really easy one.  Just add a couple thousand BTU per hour of appliance loads to six rooms in the house, and you’ve added a ton of sensible cooling load.

Those are some of the easiest places to jack up your Manual J heating and cooling loads, but there are plenty more.  Any parameter can be hacked to give you those higher loads you deserve.

Chances are, you can submit fraudulent Manual J reports to a great many building departments in the US and get away with it.  Building officials have responsibility for a lot of facets of the construction process, and they know more about some areas than others.  Reading over load calculation reports is one of the weakest areas of most building officials.  So, you’ve got that going for you.

But is cheating on these reports OK?  Here are some of the consequences of boosting the loads without justification:

So, yeah, I can show you how to cheat on a Manual J load calculation.  But guess who else finds this article when they go googling:  building officials.  And actually, they’re the ones I’m writing this for.  The numbers I used in my examples above are wildly exaggerated.  If someone submits a Manual J with 56 occupants, for example, that would be easy to spot.  But if they do a smaller amount of cheating in a bunch of parameters, it’s a bit harder to find.  Look closely, building officials!

I really did get good at cheating in 8th grade.  To make a long story short, it didn’t help me at all.  I did it only because I detested the teacher.  I spent my time in the morning before class started writing that cheat sheet I put under my leg, but I didn’t look at it at all during the test.  Just writing out the information was enough for me to remember it for the test.  I did put myself at risk of getting caught, though.

Anyone looking to cheat on Manual J load calculations is perhaps putting themselves and their businesses at risk, too.  But worse, they’re doing a disservice to the people who have to live in those houses.  Instead of going to the effort of cheating on the Manual J load calculations you do, learn the HVAC design process and do it right.  And if you don’t want to learn, hire a third-party HVAC designer.  We’re happy to help with that.

* Those of you familiar with this blog and my views on load calculations know already that the opening here is facetious.  Those of you without that knowledge know it now.  Keep reading and all will become clear.

What a Load Calculation Does NOT Tell You

Photo of building with a multitude of mini-splits by douglemoine from flickr.com, used under a Creative Commons license.