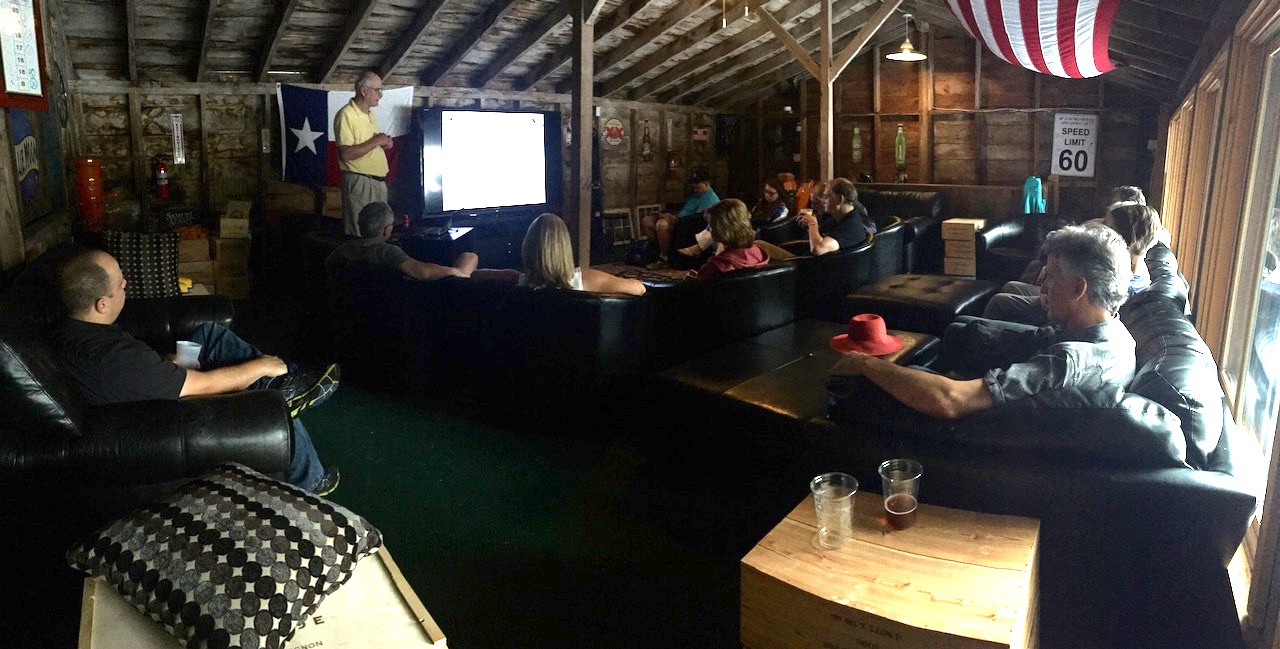 Ten years ago today, I published one of the most significant articles I’ve written here in the Energy Vanguard Blog.  Titled I Don’t Need No Stinkin’ Building Science Summer Camp!, this article got me invited to that invitation-only event where so many good things happen.  At the time, I knew a couple of people who were there (Carl Seville and Abe Kruger) and had started to interact with others online at Green Building Advisor, Twitter, and LinkedIn.  But this article was a turning point for me.  I published the article on the last day of the 2010 Summer Camp, and then Carl Seville and Michael Anschel showed it to Joe Lstiburek.  I’ve been told his response upon reading the article was, “We should invite her.”  After getting straightened out on my gender, he posted this comment:

ok. You’re invited. You are exactly the kind of guy we want here. But, you have to come sit in with the band.

The next year I showed up at the Westford Symposium on Building Science (the formal name) and have attended every year since…until this year.  Sadly, the most amazing building science event of the year was canceled this year because the coronavirus is still spreading like crazy here in the United States.  To offer some consolation to anyone suffering withdrawal symptoms—whether you attended in person or followed the action on Twitter (#bscamp)—here are some of my thoughts, recollections, and photos from the past decade.

Everyone who goes to Summer Camp has their favorite place.  Mine is the backyard at the home of Joe Lstiburek and Betsy Pettit.  The presentations at Summer Camp go from Monday morning to Wednesday afternoon, but the event starts on the Friday before and goes through Wednesday night, with many attendees spending more time at Joe and Betsy’s house than at the Westford Regency.  (And that’s true even for some of the people who have rooms at the Regency.) The backyard right behind the house is filled with tables and chairs and covered by tents.  A lot of eating, drinking, talking, and yes, even sketching on napkins happens there (photo below).  You can sit there and have deep conversations about the effect of atmospheric pressure on dew point or using modified box plots to display energy use data.  (The former I had with Gary Nelson of The Energy Conservatory, the latter with Michael Blasnik, now with Google/Nest.) And if you get there on Saturday, you can enjoy steak and lobster that evening. My second favorite part of Summer Camp is hanging out with Joe and as many other people who are willing to pack themselves into the cramped, hot, humid crawl space.  In my first few years, this happened on Tuesday evening and became known as the crawl space Twitterview, a time when we’d all sit around and ask questions and Joe would be his wittiest—and sometimes most offensive—self.  And because it was old Twitter, each question and answer was supposed to be 140 characters or fewer.  If you look far enough back in the #bscamp hashtag on Twitter, you probably can find them.  I don’t recall when the last formal Twitterview was, but the past few years have been a lot less formal and the crawl space hangout happens on both Monday and Tuesday evenings. But the evening in the crawl space isn’t for everyone.  It’s crowded.  Sitting on that concrete gets very uncomfortable.  And all those bodies in that tight little space without air conditioning gets you hot and sweaty.  The excellent wine and the compelling conversation make it worth it to me.

By the way, the photo here is from 2012, and that’s the late Mike Rogers on the far right getting his glass filled.

The bar and the band

You could be forgiven for thinking the bar shown here is an actual commercial bar.  It’s certainly stocked well enough to function as one.  And for a week in early August most years, it does function as one.  If you like to drink, Joe’s got you covered.  And the bartenders know their trade.  In the backyard, you’ll also find coolers of beer and soda and taps for draft beer.  Sometimes people bring their homebrews. On the other side of the room from the bar is the Building Science Boogie Band.  Steve Sauer, Eric Werling, and Michael Lubliner are probably the three main members, but there are so many musicians who come to Summer Camp a lot of people rotate through those spots.  I know there are at least four drummers and three bass players, not too mention Kimberly Llewelyn singing and every once in a while, Gary Nelson on the trombone. Between the bar and the band is where the dancing happens.  Back in 2015, I danced so much after midnight I woke up with 8,000 steps on my Fitbit.  I think I left around 3 am (well past the last shuttle), but Tuesday night is blowout night.  (To you Wednesday morning presenters, I apologize for not being at your talks.  I’m talking especially to you, Robert Bean and Andy Ask.)

Building Science Summer Camp isn’t just about the fun and socializing, though.  During the day on Monday, Tuesday, and Wednesday, we’re treated to some topnotch presentations…and, every once in a while, a dud.  Thinking back over the nine Summer Camps I’ve attended, these are the talks I found most thought-provoking.

The Basics of Air by David Hill, 2011.  Hill went through a lot of really important principles of moving air through ducts, including the pair-of-pants tee (like the ones I installed in my house).

Henry Gifford’s presentation in 2012.  I don’t recall the title of his talk, but he led all 450 of us in the cheer you see in the photo of his slide below.  He also got a rare standing ovation.  (Rare for Summer Camp, that is.) Lies, Damned Lies, and Modeling by Michael Blasnik, 2013.  Great presentation with lots of data analyzed in both valid and invalid ways.  The slide below shows how the infiltration rate of homes varies by the religion of the occupants, for example.  (Yes, that’s an invalid way.) How the Sausage Really Gets Made by Marty Houston, 2015.  Really stimulating talk on quality assurance during the construction process.  Lots of great photos and a phrase that I’ve never forgotten:  “the hairy hand of quality.”

Forensic Carpentry by Bart Laemmel, 2016.  Like a TED Talk for a room full of building science geeks.  Bart grabbed and held our attention the whole time with a perfectly delivered presentation about the kind of problems he works on with houses in Colorado.

A Tale About a King, a Queen, and the Couyons by Claudette Reichel, 2017.  I have to admit I saw only part of her talk because I was a nervous wreck at the time.  But she danced, she threw Mardi Gras beads to the audience, and she used Cajun words I hadn’t heard in a long time.  (I grew up way down the bayou, in Chauvin, Louisiana.) Moisture Physics by Professor John Straube, 2018.  Prof. Straube is one of those rare geniuses who can be immensely entertaining, energetic, and educational.  Don’t ever miss a chance to hear him speak if you want to understand buildings.  I wrote an article about his talk.

The Indoor Environment by Dr. Brett Singer, 2018.  This was such a great talk I wrote three articles about it:

Plenty of other presentations over the past decade helped me understand building science a little better or pick up some tips to use in the real world.

Oh, and I had a turn as a presenter in 2017.  I presented with Chris Van Rite on flex duct, a topic I love because I like good air distribution.  To find out what I mean by that, you can check out the article I wrote about it, which includes a video of my opening monologue.  I was up right after Claudette, which is why I was a nervous wreck during her talk.  In fact, I even went around that day asking other people if they would take my place.

A smorgasbord of excess!

Building Science Summer Camp is such a complete event that the only thing missing is carnival rides.  I’ve talked about the backyard conversations, eating, and drinking, the music and dancing, the crawl space fun, the incredible learning from the top building science experts, but there’s more.  There’s the pancake breakfast and basketball on Sunday morning.  (I played a couple of times and went right through that net as I drove to the hoop one time.)  Different groups hold meetings in the room above the commercial kitchen.  (That’s the BS education group in the lead photo of this article.) There’s horseshoes and bagpipes and special cakes made to look just like Joe and Betsy’s house. And let’s not forget Joe Medosch’s building enclosure card game, where the Joekur card lets you break all the rules. But most of all, it’s just a big group of people who want to learn and share and tell stories and celebrate the world of building science in a big way.  For that, we owe huge thanks to Joe Lstiburek and Betsy Pettit for having the temerity to pull this off year after year.  Thank you, Joe & Betsy!

What’s your favorite place or most memorable experience at Summer Camp?

If you want more—and who doesn’t!—have a listen to Kristof Irwin’s podcast interview with Joe & Betsy about Summer Camp in this era of the coronavirus.  And if you want to download slides from past Summer Camp’s, you can find them on the Building science Corporation page of past events.

All My Summer Camp Articles

I DO Need Some Stinkin’ Building Science Summer Camp!  (2012)