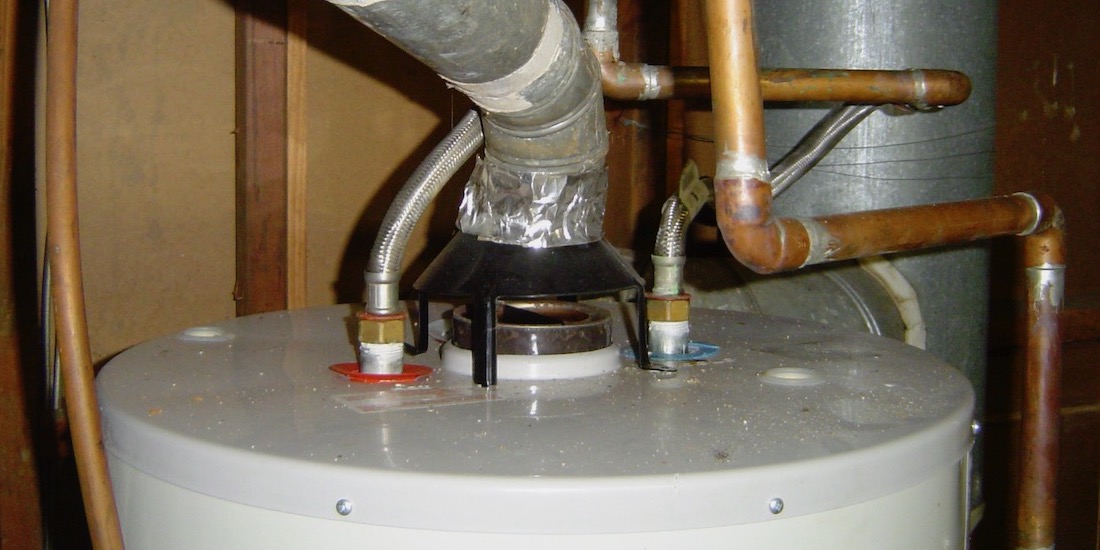 My friends Elena Chrimat and Alex Williams* recently went on vacation in Mexico.  They booked a condo and traveled down there from their home in the Phoenix, Arizona area.  They may the first ones ever to stay there who looked at the laundry (photo below) and had an immediate concern.  Do you see why this is a dangerous gas water heater?

Plenty of homes have gas water heaters.  But the great majority of them have a way to remove the exhaust gases from the combustion that happens.  In the US, it’s required by code to have an exhaust vent, or flue, connected to the top of the water heater.  That flue has to take the exhaust gases up and out of the house.

This type of water heater is called a “natural draft” water heater because it removes the exhaust gases without assistance by a fan.  The buoyancy of the hot gases causes them to rise.  The flue channels them to an exterior vent up and away from the living space.  The lead photo at the top of this article shows a natural draft water heater with a flue attached to the draft diverter.

This condo has no flue.  All of the exhaust gases empty into that laundry room.  The designers or installers or both decided to cut the cost of running flues through this 27 story building by just putting in those louvers you see on the right.  On the other side is an exterior hallway open to the outdoors.

Relying on that louvered opening to remove the exhaust gases is a dangerous proposition, for more than one reason.  First, hot exhaust gases rise.  When they come out of the top of the water heater, they’re going straight to the ceiling above.  From there, they’ll spread out in every direction.  Some may escape through the upper louvers.

If there’s pressure in the hallway on the other side of the louvers has a lower pressure than the laundry room, more of the exhaust gases will go out.  I suspect, though, that when that dangerous gas water heater operates, a lot of the exhaust gases will hang out in that room for a while.  One way to remove them more quickly would be to run the dryer, but doing that whenever the water heater is on would be difficult.

Second, if the exhaust gases do what the designers hoped, that hallway fills with carbon dioxide, nitrogen dioxide, water vapor, and maybe some carbon monoxide, too.  And it would be coming from every unit with a water heater that’s heating water.  Alex told me that the hallway is open to the outdoors on one end, so anyone walking through may breathe in quite a bit of nasty air.

Elena and Alex are home performance contractors in Phoenix (check out their company:  Ideal Energy), so they understand combustion safety.  They knew immediately that the water heater could put carbon monoxide into the air.  They saw the louvered opening as a possible exit path for the exhaust gases but knew they could still be in danger.  Fortunately, the laundry room has a door, and they left it closed when they were in the condo.  They also had a large sliding door that they left open for fresh air.

Did they suffer low-level carbon monoxide poisoning on their vacation?  It’s hard to know.  They didn’t bring a CO monitor so they don’t know for sure.  Also, when gas combustion is working as it should, it produces little to no carbon monoxide.  But other combustion products (nitrogen dioxide and carbon dioxide) can be a problem, too.  While there, they spoke with someone who lived in the building, and he has a Nest carbon monoxide detector…which he said has gone off a few times.

If you’re wondering how this unvented gas water heater is different from a ventless gas fireplace, it isn’t.  They’re also a hazard, which is why they’re banned in Canada and other places.  The ventless gas fireplace industry has been fighting the ASHRAE residential ventilation committee for a while, and they’re doing their best to keep from being banned completely.  Here’s an update on that battle from 2016.  In 2018, the last time I attended one of the meetings, things were still about the same.  A friend on the committee tells me they’ve just introduced a proposal to ban ventless gas fireplaces completely, and it looks like it’s going to pass.

Leaving the flue off of a gas water heater may seem like a situation you won’t encounter in the US, but don’t be so sure about your safety.  Plenty of natural draft gas water heaters in the US are dangerous.  They’re the most easily backdrafted combustion appliances found in homes.  And a lot of homes have them.

Many natural draft gas waters have problems with the flues.  The photo above is an extreme example, but it demonstrates the problem.  Remember that the exhaust gases are removed by their natural buoyancy carrying them up and out of the house.  When the flue doesn’t go up, neither do the exhaust gases.  They get stuck.  That causes them to spill out at the draft diverter and get into the air in your home.

You can do a quick check to make sure your flue goes up all the way to the outside.  And while you’re inspecting for rise, also look for disconnects in the flue.  That’s another common problem.  Also, if you have any combustion appliances appliances in your house (or an attached garage), get yourself a low-level carbon monoxide monitor.**

Those of us who know a little building science walk into buildings and immediately check out this kind of stuff.  We can’t not do it.  Most of the time, the bad stuff we see hurts energy efficiency, comfort, or durability.  As you can see from Alex and Elena’s experience, though, sometimes we find buildings that can be dangerous.  It’s good to know a little building science in those cases.

* Elena and Alex have a home performance contracting company in Phoenix, Arizona called Ideal Energy.  If you’re lucky enough to live in their service are, you shouldn’t hesitate to hire them when you need home performance work done on your house.

** This is a TruTech Tools affiliate link. You pay the same price you would pay normally, but Energy Vanguard may make a small commission if you buy after using the link.

The Problem of Getting Air for Atmospheric Combustion Appliances