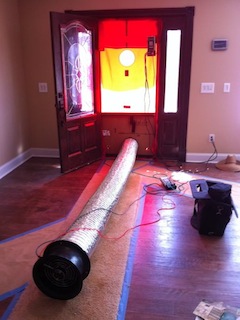 On my thousand-mile quality assurance road trip last week, I visited a house that was designed to produce more energy than it uses, making it a net zero energy home. You can take any house all the way to net zero just by giving it enough on-site power production (photovoltaics, wind, hydropower…), but that’s not the most effective way to achieve the goal of net zero energy use. First, you want to make the house really efficient, and that’s what these folks did.

If you’re a home energy pro, the photo at left may look a little odd to you (unless you work on Passive House or similar super-efficient projects). That’s my setup when I was testing the house for air leakage. Yes, it’s a Blower Door test that I was running with a Duct Blaster fan. Even better, I was running the fan with the smallest ring (Ring 3). Because the house was so tight, I needed to use equipment that would give me better resolution than the larger Blower Door fan.

This house was really, really tight. The air leakage was <200 cfm50, which translated to about 0.5 ACH50. For reference, the Georgia energy code requires all new homes to test at 7 ACH50 or less. The Passive House standard for air leakage is 0.6 ACH50.

Wondering how they got the house that tight? They took a number of measures, all of them designed to eliminate the common sources of air leakage:

They did a great job with the rest of the energy efficiency details, too. It’s becoming the norm these days, but I’ll mention anyway that they used double pane, low-e windows. The ceiling fans, lights, and appliances all were super efficient as well. They also installed a ground source heat pump with all ducts in the conditioned attic. That means there was no duct leakage to the outside. Of course, they installed a solar water heater, too, which you can see to the right of the PV system in the photo below. Once they made the house as efficient as possible, the amount of on-site power production they needed to get to net zero was smaller. The photovoltaic system on the south-facing roof ended up at about 8 kilowatts, which actually should put them below net zero. That means that the power company will be sending them money each year.

So, how do you build a net zero energy home? The first thing to do is to have someone like Jack Cowan on your team. Jack is a HERS rater in the Memphis, Tennessee area, and he started his rating company, Cowanhouse, over a decade ago. The house described in this article is going to be his nephew’s home, and Jack has helped with the design and construction, as well as being the rater on the project. He’s done a number of renewable energy projects, too, and was able to do the modeling and specifications for the PV system here.

Meeting great people doing amazing work is one of the reasons I love what I do so much.