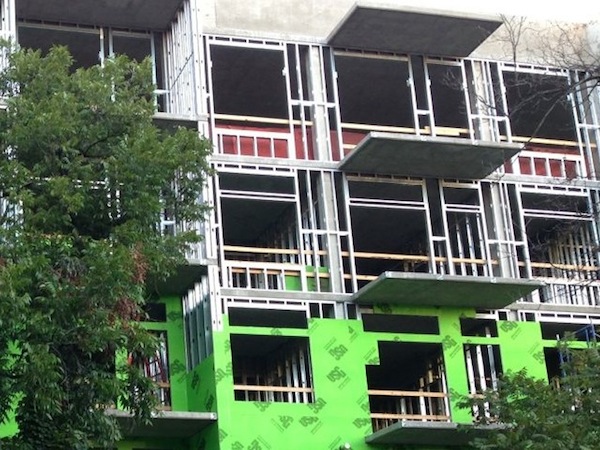 I was in Austin a couple of months ago, and I got a chance to watch the bats fly out from under the Congress Avenue bridge. (See my video at the end of the article!) I also saw a great example of how a bridge can conduct significant quantities of heat between the inside and outside of a building. A thermal bridge, that is. Take a look at this photo.

The building was under construction when I visited, and if you know a little building science, you might find that something really sticks out here, so to speak. If you’re looking at the cantilevered concrete slabs, you’ve discovered thermal bridge number one in this building.

If we zoom in, you can see that there’s no thermal break between the concrete inside and the concrete outside. Concrete happens to be a decent conductor of heat, so those cantilevered slabs will rob heat from the building in winter and bring it right inside in summer. How does one fix something like this? Well, after the fact your options are limited. If you happen to buy a condo in this building (if that’s what they’re building), you could try to wrap the porch in insulation. Or you could put foamboard on your floors inside.

Really, though, this problem needs to recognized in the design phase. Someone here missed the opportunity to specify cantilevered slabs with thermal breaks. At the Passive House Institute US conference in Pittsburgh this year, I spoke with the reps from Schöck, who sell just the kind of products that this building needs. The Schöck Isokorb CM thermal break you see above would reduce the heat flow between inside and outside greatly. It’s got the structural strength to keep the slab in place, but it also has expanded polystyrene (EPS) foam insulation. In this case, it’s the grey EPS with graphite (Neopor by BASF), which has a higher R-value.

But wait! The designers of this building wanted to ensure that even more heat would conduct through the network of thermal bridges they envisioned. Notice that in addition to concrete, the structure also includes a lot of steel studs.

Concrete does a decent job of conducting heat, but steel is even better. All those free electrons in metals are what make them conductive to electricity, and that’s what helps them conduct heat, too. Steel studs are superhighways for heat transfer!

What do you do here? Well, you don’t just put gypsum board (the green material you see in the photos) on the outside and cover it with cladding. You’ve got to put some kind of insulation on the outside when you build with steel framing members. Now, maybe they came back and put insulation over that gyp board, and I asked my buddy Kristof Irwin to take a look and let me know. Somehow I get the feeling that they aren’t doing that, though.

Building science isn’t just an abstract subject for engineers. The occupants of this building will get a real world lesson in that over the coming years.

Bats under the Congress Avenue bridge

I love bats. When I was a grad student at the University of Florida in the ’90s, UF built a bat house that became a popular evening show. Tens of thousands of bats would pour out of the house each evening as they embarked on a night of gorging on insects. Now they have two bat houses because the colony’s grown so much.

Austin has Gainesville beat in numbers, though, as they have 1.5 million of the little furry flyers living under the Congress Avenue bridge. When I was there in early October, the bats were still flying, so I went out one evening to catch the show. Here’s a little video I took of them as they emerged. Enjoy!

It was pretty dark when I took the video, so you’ll have to use your imagination to “see” the bats.  ;~)

Why Do Architects Focus on Art More than Building Science?

Graphite in Insulation — Better R-Value but Can You Write with It?