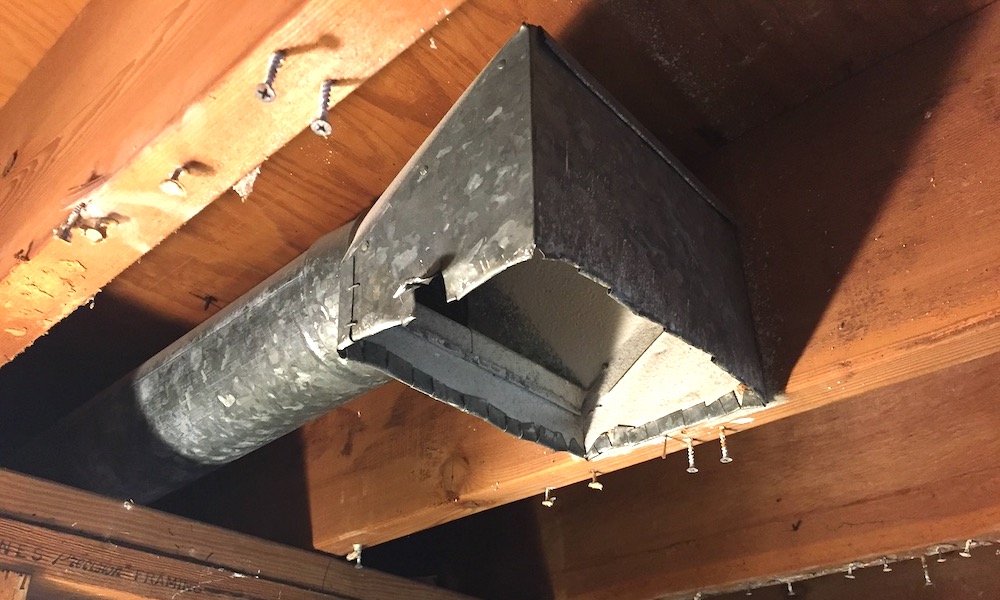 When can doing something good for your house turn into something bad?  Hmmm. There are way too many answers to that question, so let me narrow it down.  Is it possible to make your ducts more airtight, a good thing, and see your house suddenly have a condensation and mold problem it never had before?  Let explain.

I’ve been dealing with a house on the humid, Eastern side of the US lately.  It was built in the middle of the 20th century and hasn’t had a lot of improvements to make it more energy efficient.  It’s got a fairly high air leakage rate, as tested with a blower door.  It does have double-pane windows but little insulation.

The problem, though, is with the sheet metal ducts.  Or, more correctly, it’s with the interaction between those ducts and the surrounding air when the central air conditioner runs in the summer.  The ducts have been in there a long time, and they didn’t have this problem until the past few years.

The lead photo above isn’t from the house in question, but it shows a common feature:  uninsulated sheet metal ducts in the interstitial spaces created by framed floors.  This house has a basement, where the equipment is, and two floors above.  The ducts run through chases and floor joists.

Two things happened before the condensation started.  First, they had the ducts sealed.  Yes, it’s possible to seal ducts that are locked away above a drywall ceiling.  There’s an aerosolized duct sealant that can be blown into the ducts to seal holes up to nearly half an inch in size.

The other thing they did was to have the air conditioner replaced.  The new air conditioner may have had something to do with it, but it’s not oversized.  If anything, it may even be too small for the cooling load.

After the homeowner had those two things done, the house developed a condensation problem.  The uninsulated ducts above the drywall in the some of the ceilings got wet.  They found out about the problem when that water dripped down onto the ceiling below.  And when they opened up the ceiling, they found mold.

How could condensation occur?

For this to happen, one of two things had to happen.  Either ducts were colder after the work was done, or the air was more humid.  Or it could have been both.  If the ducts got colder than they had been before, the fault would probably lie with the air conditioner.  If the air near the ducts got more humid, the duct sealing is probably to blame.  I believe it’s the duct sealing in this case.  Here’s how.

Have you seen this happen?

I feel confident about this analysis, but I don’t have data from before the duct sealing and air conditioner replacement to confirm it absolutely.  Have you seen anything like this?  Do you know of any studies on this phenomenon?  Does this explain what’s happening in a house you’ve worked on?  Comment below and let me know your thoughts.