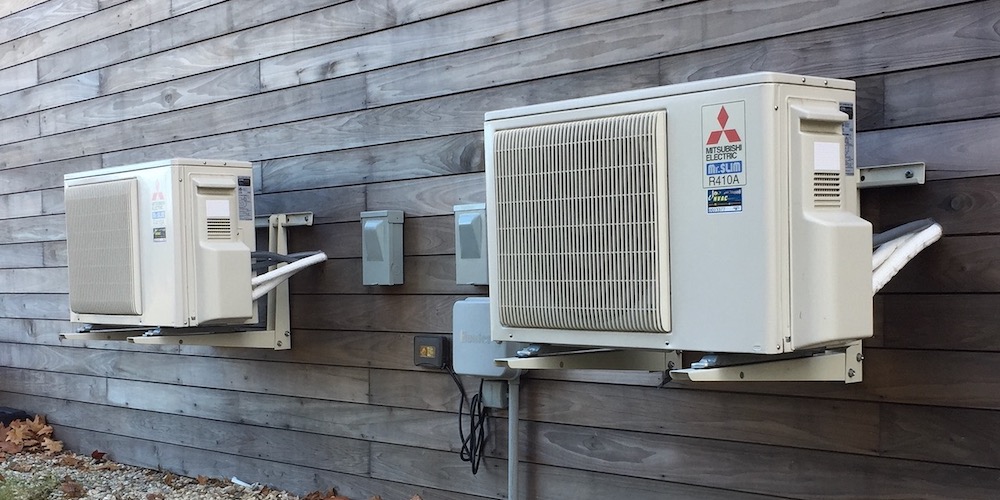 Heat pumps are riding a wave of demand and curiosity lately.  With all the talk of electrification and decarbonization, heat pumps are in!  We specify heat pumps in most of our HVAC design jobs at Energy Vanguard.  We’ve got them in our office, and I have them in my house.  But this isn’t just a US or North America thing.  They’re big in many parts of the world.  So, let’s talk about converting heat pump capacity between English and metric units.

And that gets us to the main point of this article.  Here in the US, we’re still on the obnoxious, antiquated, annoying system of units developed in the time when humans had either 12 or 16 fingers instead of the current 10.*  As a result, those old units have 12 inches per foot and 16  ounces per pound.  They go by various names, with English, inch-pound, imperial, and US customary being the most common.  There are some differences among them, but I’m just going to call them English here.

The problem with using the old units is that the rest of the world does things differently.  They don’t use British Thermal Units per hour (BTU/hr).  They use kilowatts (kW) instead.  Now, we use kilowatts in the US, but only when we’re talking about electricity.  That’s good because we have some familiarity with that metric unit.  But that’s bad for another reason, which I’ll get into below.

When we talk about the capacity of a heat pump here in the US and Canada, we use BTU per hour as the unit.  Sometimes we use the ton, which is an easy conversion.  One ton of heating or cooling capacity is just 12,000 BTU/hr.  The ton was invented for cooling because it has its origin in the weight of ice.

Converting heat pump capacity to kilowatts is easy.  You simply divide the capacity in BTU/hr by 3,412.  That’s because there are 3,412 BTU/hr in one kW.  It’s just a conversion factor, so nothing to be afraid of.

The table above shows common capacities you can find for heat pumps in the US and Canada.  They range from 6,000 to 48,000 BTU/hr.  The second column shows the equivalents in tons, and the third column shows the capacities in kilowatts.  Easy peasy, right?  One thing to note here is that conventional heat pumps start at 18,000 BTU/hr.  To go lower, you need a mini-split heat pump.

Oh, in case you’re wondering why I didn’t include 60,000 BTU/hr (5 tons, 17.6 kW), we have a saying in our office when working on designs:  5 tons is never the right answer.   It’s just too difficult to make a 5 ton system keep one house comfortable, but that’s a different article.

Converting the other way

But what if you’re looking at a heat pump in the United Kingdom rated in kilowatts and are wondering how many BTU per hour or tons it equates to?  You can always use the conversion factors above to do the calculation, of course.  The table below, though, shows you the range of capacities for various UK heat pumps and their equivalent capacities in our annoying units.

One big takeaway from the two tables above is the ranges.  In the US and Canada, our heat pumps go from 0.5 ton to 4 tons (OK, yeah 5 tons, but that’s the wrong answer).  That range runs from about 2 kW to 14 kW in metric capacities.  And the metric-to-English conversion shows about the same:  1.5 to 14 kW corresponds to 0.4 to 4 tons.

All the numbers I discussed above refer to the amount of heat moved by a heat pump.  Don’t confuse that with the amount of electricity used by the heat pump.  That’s the pitfall I referred to above since we use kilowatts only for electricity in the US.  A 1 ton heat pump moves 12,000 BTU of heat per hour, or 3.5 kilowatts.

The amount of electrical power needed, however, is generally only about a third of the amount of heat moved.  Remember, a heat pump isn’t generating heat, as a furnace does.  It’s just moving heat.  You can think of a heat pump as a kind of lever or pulley system.  For example, you can lift a 500 pound weight with only 50 pounds of force when you use a block-and-tackle.  That’s kind of what a heat pump does for you, too.

Not just for heat pumps

I’ve focused on heat pumps here, but the conversions above apply just as well to air conditioners, furnaces, boilers, or anything else with a power rating.  All we’re doing above is converting heat pump capacity from one type of units to another.

* Of course it isn’t true that humans used to have 12 or 16 fingers.  Despite what you might see in those ancient statues and paintings, it’s always been ten.  Things have gotten so crazy, though, that I wouldn’t be surprised if someone out there starts trying to convince people of even crazier things.  Like, say, birds aren’t real.

Is a Heat Pump More Efficient Than a Furnace?

The Easy Way to Convert between Celsius and Fahrenheit