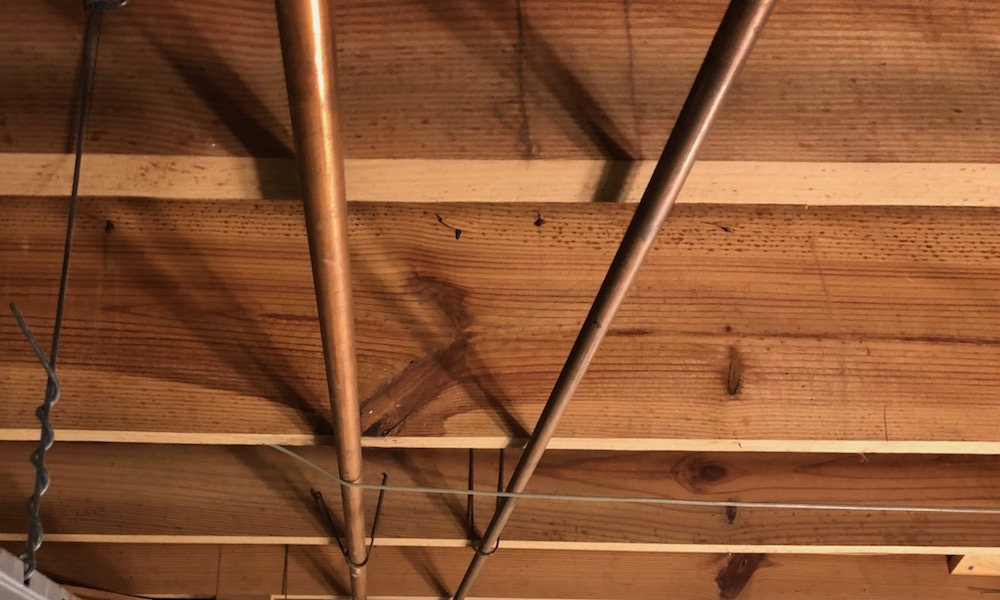 The schematic below shows the conditioned space of a one-story house outlined in black.  I’ve also shown the locations of the water heater and all of the hot water fixtures in the diagram. In this simple example, the hot water rectangle is 93%.  That’s only slightly less than the conditioned floor area.  And believe it or not, as bad as that sounds, it’s not as bad as it could be.

In a one-story house, the number actually can be more than 100 percent. If the water heater in the house above were in an attached garage, for example, the hot water rectangle would be greater than 100 percent.  The conditioned floor area would be smaller because we’d subtract the area of the garage.  But the hot water rectangle would be the same size shown above, making the ratio greater than 100%.

The challenge is to reduce that ratio represented by the hot water rectangle. If you’re a home builder or architect looking to improve, this is easy to do. It’s a lot cheaper to move rooms around on a computer screen than it is in a real building.  Let’s go back to that one-story house above. The hot water rectangle ratio is often a high number when no one considers the efficiency of the hot water distribution system. And in this house, the ratio starts out at 93 percent, which is pretty bad.

Without changing the floor plan much, we can reduce that number a lot. The second layout (just below) shows the kitchen rearranged to have the hot water fixtures near the center of the house and the two bathrooms also moved toward the center. The ratio for that configuration is 26 percent.  Most of the rooms are pretty much in the same places, but we moved the kitchen plumbing to the interior and moved the bathrooms a bit.

By making bigger changes to the floor plan, we can get an even bigger reduction in the hot water rectangle. In the third layout (below), the bathroom and kitchen hot water fixtures are even closer together.  And the water heater and laundry room have moved to the center of the house. The result is a ratio of 3 percent. And that’s still not the best we can do.

A real-world example of extreme improvement

Klein worked with Habitat for Humanity builder George Koertzen in Stockton, California, and helped him make a dramatic improvement in efficient hot water delivery by reducing the hot water rectangle ratio for the single-story houses he built. Before learning of the importance of clustering the wet rooms, Koertzen was building a floor plan with a 79 percent ratio. Then he saw the potential and got that down to 15 percent on his first attempt. Then 4 percent…and 2.5 percent…and finally, an astounding 0.8 percent!

The way he got down to less than 1 percent was by first putting the two bathrooms on opposite sides of the same wall. Then he put the kitchen sink and dishwasher at one end and the washing machine at the other end of that wall. He installed the tankless gas water heater over the toilet in one bathroom and the home run manifold over the toilet in the other bathroom. The total length of pipe from the water heater to the farthest fixture is less than 10 feet.

What can you do?

If you’re a remodeler or homeowner trying to figure out how to get efficient hot water delivery in an existing home, you face more challenges. One option is to replace the hot water pipes (assuming they’re accessible).  Without changing the floor plan, you may be able to reduce the length and also right-sizing the diameters.

Another option is to move the water heater to a more central location, if that’s possible.  Then reroute and rightsize the piping at the same time. Or you could replace one large water heater with two or more smaller ones, closer to the hot water fixtures.

And the massively expensive option, of course, would be to gut the house and completely redesign the floor plan, clustering all the wet rooms in the same part of the house.  My hot water rectangle ratio is currently 50% for two-story house.  By switching the laundry room with the foyer and moving the kitchen to the den, I  could get that down to 5% or less.  But that would be an enormous renovation.

In each of those options, your goal is to reduce the size of the hot water rectangle and right-size the pipes. However, in most existing homes the least expensive option is to install a demand-activated circulation pump under a sink that is at the end of one or more of the trunk lines in the house.

A report full of great info

The hot water rectangle (also called the hot water distribution rectangle or hot water system rectangle) is explained in detail in a 2021 report from the California Energy Commission (CEC-500-2021-043).  It’s similar to the wet room rectangle, which may or may not be the same numerical area or ratio.

The authors of the report (Gary Klein, Jim Lutz, Yanda Zhang, and John Koeller) have done us all a great service by doing the research and putting the information out there.  And it’s got a lot more on efficient hot water delivery than just the hot water rectangle.  Chapter 5 even presents “two unexpected findings.”

A Hot Water System Retrofit for an Old House