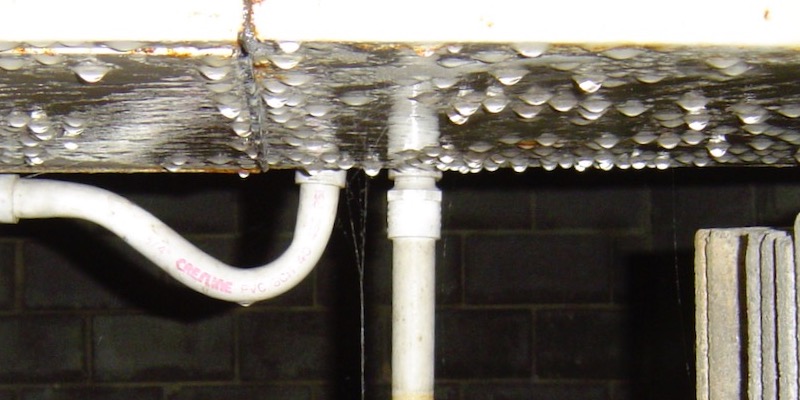 That photo above is the bottom side an air conditioner in a crawl space on Hilton Head Island, South Carolina.  Those droplets tell us something important:  A property of the air in that crawl space aligned with a property of that surface to convert water vapor into liquid water.  What are those two properties?  And what else should we know about dew point?  Let’s do a quick check on some important facts about dew point temperature and find out.

1. The dew point is a temperature

I’ve certainly been guilty of using the shorthand term “dew point” and will continue to do so.  It’s important to remember, though, that whenever we talk about dew point, we’re talking about a temperature.  It’s not a place or time or event.  It’s a temperature.  And the dew point temperature tells us when condensation like you see above will happen.  It tells us about the potential for condensation but not the actual occurrence.

2. The dew point temperature is a property of the air

3. Materials have a temperature, but not a dew point

There are other important facts about dew point temperature, too.  In this article, my focus is on condensation only.  That’s what you see in the photo above, on a window when it’s cold outdoors, or on the bathroom mirror after your shower.  Water vapor interacts differently with porous materials like drywall and wood, though.  I’ve got things to say about that topic, too, but we’ll save it for another time.  Meanwhile, if you want more, you can ponder whether it’s possible to get  condensation on a sponge.