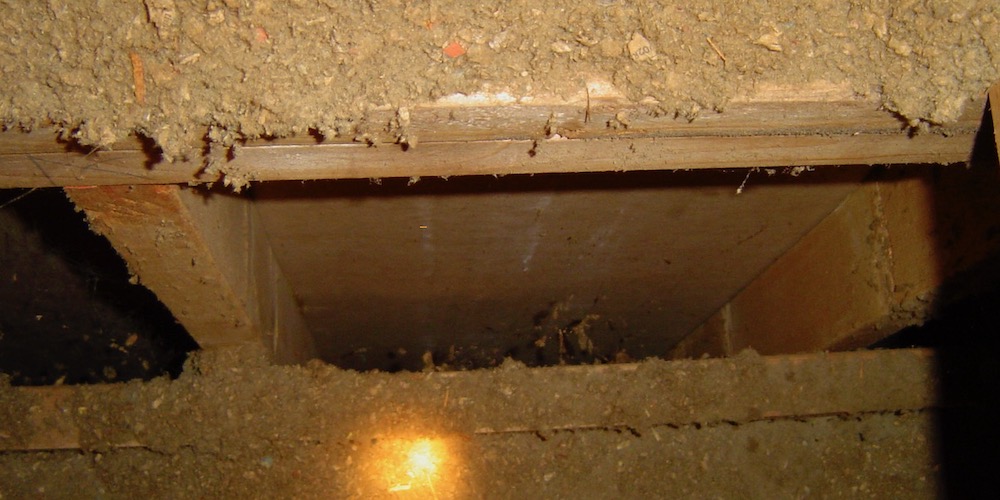 It seems so simple. There’s outside, and there’s inside. The walls, ceilings, and floors that separate the cold outside from the warm inside should be the only surfaces that rob heat from your home. Interior walls have conditioned space on both sides, so they shouldn’t be a problem, right?

Wrong! I’ve seen and worked on several houses that lose heat through their interior walls, including the one I wrote about a few days ago in my article on hidden attic air leaks. They’re usually older houses that have been modified from the original, but I’ve seen these problems in new houses, too.

In such houses, the problem results from the top of the walls being open to the attic, as in the photo above. You can go into the attic and look down into the interior walls and see the drywall. That means that cold attic air gets down into those cavities.

With cold air inside the wall and warm air on each side in the house, heat moves through the drywall, which has a low R-value, and warms up the air in the cavity. The warm air then rises into the attic (a process called the stack effect). As that warmed air leaves the interior wall, cold attic air moves into the cavity to take its place, resulting in more heat loss. This process continues as long as the attic stays cold and the house is warm.

To fix the problem, you have to stop air from moving into or out of the interior wall cavities. One way to do this is to cover the opening with a rigid material and use caulk or spray foam to seal the edges.  Another way is to stuff a piece of fiberglass insulation into the gap at the top of the wall and spray foam over it. That’s essentially what I did with that wall in the lead photo.  It’s important to note that the fiberglass by itself is not sufficient because fiberglass does not stop air movement.

The result is that the air under the insulation (between the two ceilings) is at the same temperature as the attic air. That cold air is separated from the house only by a layer of drywall. As that air warms up from heat moving through the drywall, it moves through the openings into the attic and is replaced by more cold air. The insulation is useless because it’s in the wrong place!

The photo below shows another house that I fixed.  It had the same problem with a lowered ceiling in one room.  The photo shows the new cellulose insulation we blew into the gap between the original ceiling and the new lower one.

Earlier this year, I wrote about a house that a friend of mine was buying with an Energy Efficient Mortgage, and it had both of the problems I described here – cold walls and useless insulation.