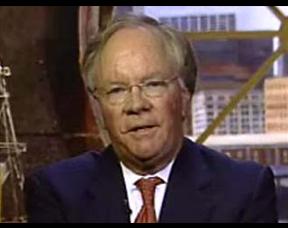 Matt Simmons died this week. It’s a huge loss for the peak oil community, as he had great knowledge and understanding of the big picture of global oil production, especially in Saudi Arabia.

Matt Simmons died this week. It’s a huge loss for the peak oil community, as he had great knowledge and understanding of the big picture of global oil production, especially in Saudi Arabia.

I’ve been speaking and writing about peak oil since 1998, and in 2005 I went into overdrive with it. It’s a hugely important issue and a big part of the current economic downturn. I could write all day about this issue, but instead, I’ll spare you and just post the review of Matt’s great book, Twilight in the Desert, which I wrote in 2005 (the review, not the book; Matt wrote the book).

Twilight in the Desert, by Matthew R. Simmons. As an oil investment banker in Houston, Texas for the past 30 years, Simmons has had to analyze a lot of oil production information. For this book, he pieced together, as best he could, a picture of the Saudi oil industry mostly by reading the technical papers of the Society of Petroleum Engineers (SPE). He spent a whole summer poring over papers dating back to 1961, each one being a piece of a jigsaw puzzle that he meticulously assembled.

Unfortunately, the picture that these papers create is vastly different from the official message from Saudi officials. He found a wealth of technical problems that have hampered production for decades, from increasing water in the wells to concentration of production in a handful of oilfields to possible overproduction. The problems he found are enough to make him confident that Saudi Arabia won’t come close to reaching 15 million barrels per day (mbd), much less sustain that level for 50 years, as they claim they can. In fact, he believes they probably will never surpass their 1981 peak of 10.5 mbd.

Another problem he discusses is that OPEC stopped reporting oil production data in 1982, so the jigsaw puzzle that he assembled isn’t complete. The SPE papers provide some, but not all, of the pieces. Because of this, he pleads for greater data transparency and third party verification of field-by-field production data.

This is a great book with a wealth of hard data and technical information, but Simmons also gives some history of Saudi Arabia and how current social issues affect their oil and gas operations. For example, he describes how their tremendous population growth has increased their need for natural gas for electricity and desalination plants. Also, I was surprised at how good a writer Simmons is. He sometimes strains his metaphors a bit, and he doesn’t always define his terms, but he writes clearly and effectively.

If you’re a technically-minded person and are trying to learn everything you can about the current global oil supply state of affairs, then this book is essential reading. If you don’t care to know all the details about Saudi oil, you might still be interested in the first six chapters of the book (~150 pages). In it, he discusses Saudi Arabia’s oil history, describes the global oil situation, and explains in lay terms how oil is extracted and why it’s so important.