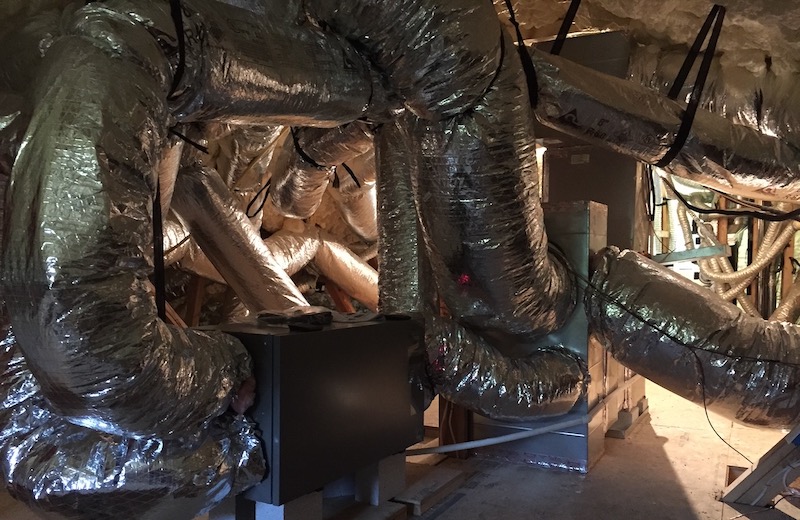 Three questions have been nagging at Rick Chitwood over the past 5 or 6 years. First, why is the HVAC industry in California, where he lives and works, so pathetic? Second, why have California’s strict energy standards, which have been in effect since 1978, not corrected the problem? Third, how is it that he, who came to the HVAC business through a nontraditional route, has become a leader in the industry? Chitwood shared with me his thinking behind the seven measures he thinks should be mandated, including that builders should pay the energy bills for the first three years.

The origin of a radical idea

This week at the Forum on Dry Climate Home Performance, Rick gave a short talk on the difference between what the models show and what actually been achieved, and he concluded with 7 measures he believes should be required in California. The measures originated from some deep thinking he did upon re-reading Leverage Points: Places to Intervene in a System by Donella Meadows while he was on vacation last year. In that paper, Meadows argues that your best bet at achieving transformation is to change the paradigm. The least effective avenue is through standards and codes.

The best way to create a system that works well, Rick told me after his presentation, is not to adopt the wrong paradigms in the first place. “That was me. I never learned the conventional HVAC approach. I didn’t learn the bad habits.”

As Rick thought about those nagging questions, he realized that four things needed to happen.

1. We have to pay attention to human nature. People will take the easier path when there are no negative consequences for doing so.

2. Move from energy models to reality. At the Dry Climate Forum this week, “modeling” has been taboo. It’s referred to here as “the M word,” and speakers who talk about it risk not being invited back to the conference. These folks are into measured results.

3. Take the narrative away from the box manufacturers. Most installed HVAC systems perform like crap because HVAC companies follow the lead of the manufacturers, who just push the heating and cooling equipment and ignore the distribution side and commissioning.

4. Train the workforce. A great many of the installers and technicians are woefully undertrained in proper installation of HVAC systems.

Rick works in California, which has a lot of requirements due to their building code, Title 24. One of those requirements is for HERS raters to do Title 24 compliance inspections and verification, and most builders, according to Rick, would like to eliminate the cost of that third party verification.

Here’s his 7 step plan to accomplish that objective and, at the same time, transform the construction industry in California.

1. Downrate HVAC performance 50% in models. You can get credit for the other 50% by measuring full delivered performance once the system is installed.

2. Post the energy model results where everyone can see them. Energy compliance documentation includes predicted energy use in each category (heating, cooling, WH, base) in dollars (site energy & current rate structure) and these predictions must be posted on the electrical panel in every new home.

4. Assure quality and hold stakeholders accountable. Installers test the delivered performance of their work on every system and record the results to the registry. Eliminate all HERS verification. Have the California Energy Commission do quality assurance on 1 in 100 systems. If cheating or errors occur, every system installed in the last year must be tested—at the contractor’s expense.

7. Every builder should pay the energy bills on every home he builds for the first three years of occupancy.

Imagine if home builders had to pay the energy bills

The whole package of 7 measures is designed for the specific code climate in California.  What a change it would bring if he’s successful. It really could work there because the builders would get some benefits, too. Doing away with the current third party verification system, which is based heavily on modeling, could save them money and time.

The last of his 7 measures, however, has the power to reconstruct the construction industry elsewhere, too. Just imagine how energy efficient new homes would become if builders had to pay the energy bills for the first three years. It wouldn’t take them long to get all the air sealing, duct sealing, HVAC location, and insulation effectiveness right.

Can this work outside California? Maybe. Of course it would sound onerous to home builders initially. They’d see it as another cost they’re asked to bear.  They’d either have to pass it on to the buyer if they could or deduct it from their bottom line.

But what if the extra cost to the builder were balanced by a reduction in costs somewhere else, as in Chitwood’s proposal for California? That’s the only way something like this would fly. And there would have to be some way of exempting builders from excessive energy use from things like swimming pools and grow rooms.

I could see some builders doing this voluntarily as a sales tool. They probably wouldn’t do a full three years in that case. But home buyers certainly would take notice of a home that comes with the first year’s energy bills covered by the builder. It’s a step up from guaranteed energy bills, which some companies offer.

What do you think?

Does Energy Efficiency Drive Home Builders out of Business?