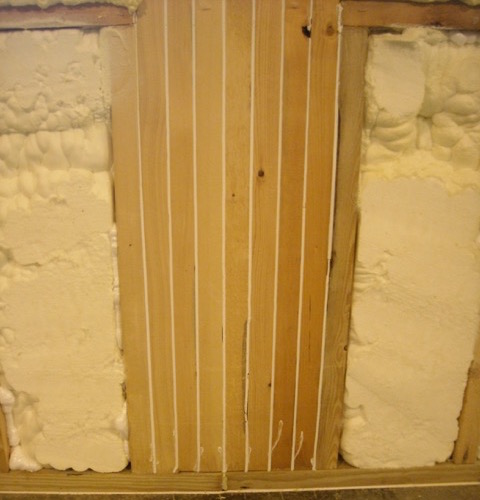 We talk about R-value all the time. “I’ve got an R-19 wall,” or “Code requires R-38 in my ceiling.” But what are those numbers? As it turns out, when we talk about R-value we usually give the R-value of the insulation. That’s the case with both of those statements above. But what’s the real R-value of the wall or the ceiling? Insulation makes up only a part of each. There’s also wood and drywall and sheathing and cladding and…

If we use R-value to describe only the insulating properties of the insulation we install, we neglect the insulation value of the other layers in a building assembly. In a wall, those layers include drywall, sheathing, cladding, and air films. Adding up their individual R-values gives the total R-value.

Similarly, using only the insulation’s R-value ignores the effects of thermal bridging. Wood has a lower R-value than insulation so including it reduces the overall R-value of a wall. And then if you want to factor that thermal bridging in, how do you do it?

As it turns out, building scientists at the Oak Ridge National Lab worked on this back in the 1990s. Jan Kosny and Jeffrey E. Christian wrote a paper in 1995 titled Whole Wall Thermal Performance and introduced three new types of R-value. Here are the names and definitions, straight from their paper:

R-value estimation at a point in the wall’s cross-sectional R-value containing the most insulation.

R-value estimation for the exterior wall area containing only insulation and necessary framing materials for a clear section with no fenestration, corners, or connections between other enclosure elements such as roofs, foundations, and other walls.

R-value estimation for the whole opaque wall including the thermal performance of not only the “clear wall” area, with insulation and structural elements, but also typical envelope interface details, including wall/wall (corners), wall /roof, wall/floor, wall/door, and wall/window connections.

Whole-wall R-value is really what you want to know most of the time. In new home construction, complex building enclosures rule the market. Look at all the corners, roof-wall intersections, and other complexities in the photo above. At least on the front of this house, there’s not a whole lot of clear wall there.

This is a code-built house in Atlanta, so they used R-13 insulation in the walls. They’re putting half inch drywall on the interior, half inch OSB on the exterior with brick and stone cladding. My estimates of the various R-values are:

Whole-wall R-value doesn’t include the windows and doors. If we include those in our calculation, the number is even lower. A typical window here in Georgia has R-value of 3 to 4, and doors are similar. Average that in with the R-13 insulation, and your overall R-value drops to single-digits.

The thing to remember here is that the R-value in your walls, floors, and ceilings isn’t the same as the R-value of the insulation you put in them. Oh, and one more thing: The R-value you calculate according to the definitions above isn’t a static number. It changes with temperature and other factors.