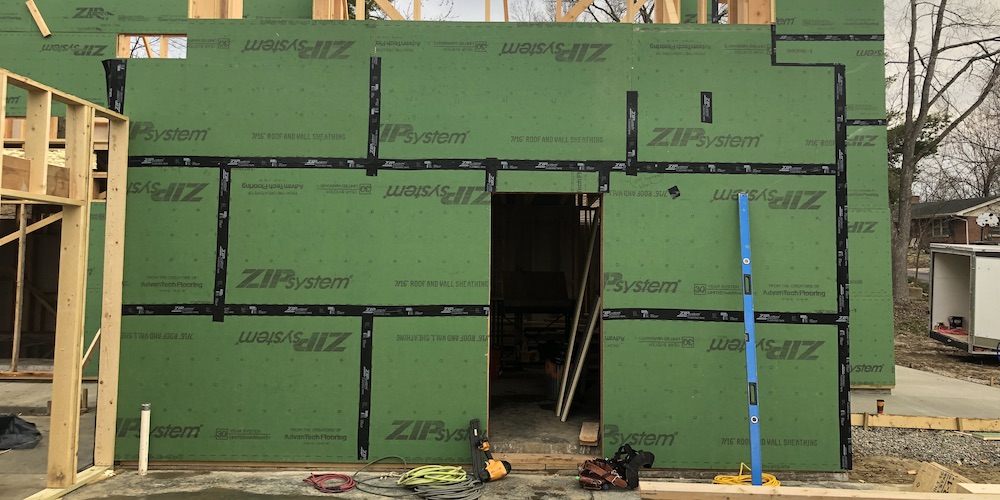 An attached garage is the source of a lot of indoor air pollutants for a great many homes.  That’s because we store gasoline, pesticides, paints, and other toxic materials there, and we exhaust the fumes of automobiles there as well.  Some older homes make it easy to deliver those pollutants to the living space by having the furnace or air conditioner right in the garage.  Even without that, though, most homes provide lots of pathways for polluted garage air to get into the house.

But Jake Bruton of Aarow Building in Missouri builds his houses with a no-fuss, no-muss continuous air barrier.  And today’s your lucky day because I’m going to show you how he does it.

The difficult, the bad, and the ugly

Of course, there are a lot of penetrations that provide pathways for pollutants.  But even bigger holes exist where you can’t see them.  The joists that run across the top of the wall separating the garage from the living space should be sealed but often aren’t.  The four photos below illustrate the problem.

The photo above shows the joists running across the wall.  This house was built in Georgia four years after our mandatory blower door test went into effect, so I assume the builder must have at least attempted to block and seal those openings.  But they certainly made extra work for themselves.

To make those open cavities even worse, you can do the two things the builder of the house in the photo above did.  First, run a flex duct through the joist opening.  It’s really difficult to get a good air seal around flex duct.  Second, put a change in ceiling height at the garage wall.  That section of wall above the lower ceiling needs an air barrier.  Installing it after framing that ceiling increases the work required to make it airtight.

Keep that last bit in mind because that’s the key to how Bruton has ensured airtightness between garage and house.

The photo above shows one of the ugliest attempts at creating an air barrier that I’ve ever seen.  (Here’s one that’s even uglier, though.)  The photo below shows their attempt at sealing it.  I wasn’t involved in testing this house, but I’m sure that air barrier was probably leaky.

If you insist on doing it this way, though, please see my article on that garage above.  I’ve provided advice there about how to block and seal it properly.

Solving the problem with design

I mentioned above that the lowered ceiling in that one house made it harder to air seal because they had to do the air barrier after framing the ceiling.  So what if you do all the framing for the house, install your air barrier, and only then frame the garage?  That’s what Jake Bruton does with the houses he builds.

The lead photo of this article shows one of his houses framed this way.  You may have thought that’s just an exterior wall waiting for its cladding.  But it’s not.  It’s the wall that’s going to separate the not-yet-framed garage from the house.  The photo below shows that same wall with more of the garage framing completed.

Isn’t it beautiful!  No joists visible and a continuous air barrier between house and garage!

Bruton uses Huber’s Zip sheathing with taped seams as his air barrier, but this method works with any kind of properly installed air barrier system:  house wrap, fluid-applied membrane, peel-and-stick membrane, or rigid foam board with taped seams.  As I mentioned in an earlier article on this topic, the best way to attack this problem is in the design phase.  And that’s what Bruton has done.

By the way, I got to see Bruton’s presentation last week at the Midwest Building Science Symposium, where he talked about this and many other concrete ideas for improving the control layers in houses.  And Steve Bazcek, Ben Bogie, Emily Mottram, and a few others (including me) also shared a lot of great info there.  If you missed it, you have another chance coming up because we’re doing it again next month in Chattanooga.  The KC event sold out so register now to make sure you get into this one.

How Can You Air Seal These Joists Over the Garage?