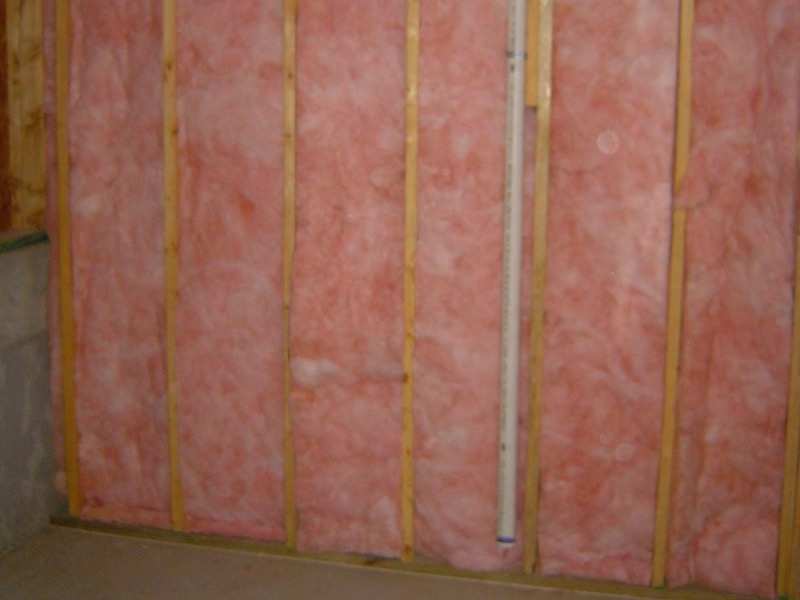 I visited a new house earlier this year that had a basement wall that looked fine* at first glance. At left you see this wall, with its 2″x4″ framing and fiberglass batt insulation. That wall you’re looking at, though, has a major problem, and it didn’t take much digging to find it.

One of the first lessons in building science that new HERS raters get is the definition of the building envelope, sometimes called the thermal envelope to distinguish it from the weather shell. Understanding the building envelope is huge to home energy raters or other energy auditors because that’s where they should look first for opportunities to improve a home. Here’s the definition:

In the diagram at right, the blue area is conditioned space, and the dark blue line shows the building envelope. That’s where all the insulation is, and that’s where the air barrier is. Wherever you find insulation, you have to have an air barrier right next to it.

So, take a look at what I found when looked a little deeper. There’s clearly no air barrier on the side shown in the first photo, and, as you can see at left, there’s no air barrier on the back side either. (No, in case you’re wondering, the paper facing on fiberglass batts does not qualify as an air barrier. It can’t be sealed well enough to stop air movement.)

So, what’s the problem with this misalignment of air barrier and insulation, you ask? The side I took the photos from is the mechanical room in the basement. It’s outside the envelope and connected to the garage and the outdoors. The other side of that wall is supposed to be inside the envelope and is connected with the conditioned part of the basement. The lack of an air barrier on that wall adds an enormous amount of infiltration to the house, and the Blower Door test will find it. In addition, air moving through fiberglass insulation pretty much kills the R-value because it’s no longer ‘dead’ air.

This house is a perfect example of why third party verification is so important in qualifying homes for programs like ENERGY STAR. Someone who’s trained in building science and understands the building envelope will find this misalignment problem. Even if it eludes them on their visual inspection, they’ll catch it in the Blower Door test.

*Some of you may look at that wall and say it doesn’t look fine at all, even if it had an air barrier behind it, because fiberglass batts require 6-sided encapsulation, and these are exposed on one side. To that I say, I agree completely with you. ENERGY STAR, however, requires 6-sided encapsulation only for IECC climate zones 4 and higher, somehow thinking that everyone in climate zone 3 and lower is in cooling-dominated climates. More about this later.