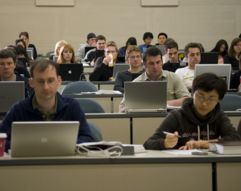 I don’t know how accurate it is, but I’ve seen in a few places now that the national average for students passing the test on their first attempt is about 65%. Having been a co-instructor in the HERS rater class 19 times for another HERS training provider, I can tell you that that number seems reasonable to me, if not a little high.

Of all the HERS training providers’ websites that I’ve looked at, none show the data from their national rater test results. I do have the data for one training provider’s tests, however, from the period November 2007 through May 2010. In the 21 classes taught during that period, 191 out of 346 students passed the test on their first attempt. That’s a passing rate of 55%.

I’ve discussed here before what we’re doing to change that in the Energy Vanguard HERS rater class and will discuss it many more times in the future. But let me just say now that a passing rate of 55% – or even 65% – indicates that there are problems with the test, the training, and the expectations.

One result of this low passing rate on the national home energy rater test is that the final cost of HERS rater training for a lot of people is higher than the $1200 to $1400 they pay their HERS training provider. For all those students who aren’t in the 55% or 65% who pass the test, add another $50 to $150 per additional attempt at the test. I’ve known some people to take it nearly 10 times before finally passing it, although most who retest do pass it on their second attempt.

Also, most HERS training providers structure their classes in a way that is not pedagogically sound. At the end of most HERS rater classes, the last thing the students do is take the rater test. If the national average for passing rate is indeed 65%, then 35% of them walk away having just failed the test. It doesn’t matter to them how much they learned during the week because they leave the class feeling like a failure.

In our HERS rater class, students get up to three chances to pass the test during the 8 day class – at no additional charge – and passing or failing the test is NOT their last experience of the class. In the spirit of openness, we’ll be publishing our data on first attempt passing rates as well as the overall passing rate. Anyone taking the Energy Vanguard HERS rater class will know coming in what their chances of success are.