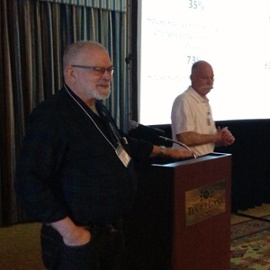 The research team opened their work by finding four suitable houses to use in the project. They’ve got a relatively new house built in 2005 that’s pretty much at the level of their current energy code. Then they’ve got houses that get progressively worse as you go back in time. They were built in 1996, 1953, and 1948, and as you might expect, the three older houses showed much greater savings than the 2005 house. Here’s a table of the basic data:

What they did in the homes was to set them up to collect a year’s worth of data before they made any improvements. All the homes were unoccupied, but the researchers set them up for simulated occupancy. What that means is they automated the controls in each house to run the HVAC and other systems similarly to the way real occupants would.

First, let’s take a look at what I think is the most interesting part of their work. They didn’t report Reference vs. House System results for the Caleb, the newer house, but the results for the three older ones were all similar and are summarized below.

What those numbers mean is that before the team made any improvements, the HVAC system in the Fidelia, for example, was using more than twice as much energy as it would have if it had had its HVAC system installed in conditioned space instead of in the attic. That is, since the House System was operating at 42% of the efficiency of the Reference System, it was using 100/42 = 2.4 times the amount of energy. That’s quite a penalty! The Mayfair (shown in photo above before new attic insulation) and the Grange showed great improvement but didn’t get all the way to 100% because the ducts were still in the attic but buried under a lot of attic insulation. They estimated the insulation above the ducts to be R-25. (Warning: Burying ducts under attic insulation is fine in a dry climate like California’s but can lead to condensation and water-damaged ceilings in humid climates.)

The improvements they made in the houses were all similar but varied somewhat based on the needs of the house. The newest house got the least work, and what it got was focused almost entirely on the HVAC system. Here’s a summary of the retrofits on the older three houses:

Yet they’re saving boatloads of energy. The three older houses are now using about a quarter of the energy they formerly used for heating and cooling. Wow!

The research team hasn’t put together the costs of the retrofits yet, but they’re certain to be reasonably low. (My guess is in the twelve to thirty thousand dollar range, but that’s just a guess.)

One of the key elements of this work is getting the HVAC system losses as low as possible. If you look at the details of the improvements they made, you’ll see one of the main things they did was to get the ducts to move more air using less energy. Now do you see why I talk about ducts so much here?

This study, which is entering its third year now, is a great example of the opportunities available for saving energy in existing homes. Or, if you look at it the other way, it’s a look at the tremendous amount of energy wasted in so many existing homes.