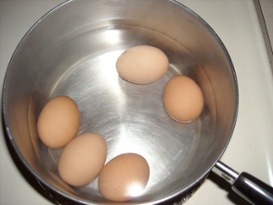 A couple of weeks ago, one of my friends wrote on Facebook, “How many more times in my life will I forget that I am hardboiling eggs?” That got me to thinking about the time my grandmother told my aunt, who happened to be sleeping at that moment, that she (my grandmother) had to leave the house but had left some eggs boiling on the stove and asked if she (my aunt) would please get up and turn them off in 10 minutes. Well, I think you know what happened to those eggs.

Then, lo and behold, my lovely wife, Elaine, put some eggs on the stove to boil yesterday. Now, I’m nearly half a century old and thought there was only one way to boil eggs, but she taught me something new. The pot had barely started boiling with the eggs in it when she turned off the burner and walked away, with the eggs just sitting there in the hot-but-no-longer-boiling water.

As she left the kitchen, I asked why she wasn’t going to finish boiling the eggs, and she said that they just had to sit there for a while, and they’d be boiled. I’d never heard of such a method. It seemed preposterous. How could they get to the hardboiled stage if you didn’t keep the water boiling for 10 minutes?!

A quick search online showed me that this wasn’t some secret knowledge that only she had. My gasts were flabbered! How could I have gotten to this point in my life without knowing about this? Especially since I’m Mr. Energy Saver.

Yes, there really is a connection between boiling eggs and saving energy. By turning off the burner as soon as the water boils, rather than letting it go another 10 minutes, you save energy.

If, like my friend or my aunt, you forget the eggs on the stove, however, and leave the burner on for an hour till the pot runs dry and the eggs catch on fire, you’ll pay an extra 24 cents in electricity…plus the cost of the eggs and the pot that’s now ruined.