I'm a big advocate of getting ducts inside the building enclosure. In cooling climates, getting ducts out of an unconditioned attic can save you 15% on your electricity bills. It can reduce the size of air conditioner you need by 25%. If it's not in such a harsh environment, your air conditioner will last longer, too. But how do you do it?

First, I'll show you 5 acceptable ways to do it. Below is a diagram from the paper by Dave Roberts and Jon Winkler of the National Renewable Energy Lab (NREL) that I wrote about a while back. (That's also the paper that the above statistics come from.)

In the first approach, you move the building enclosure to the roofline so the attic becomes conditioned space. The second one shows a lowered ceiling or soffit in the house, and that keeps the ducts below the attic. The third shows ducts between conditioned floors in a multi-story house. The fourth shows them in the attic, sort of, but below the building enclosure with some help from a special type of truss. 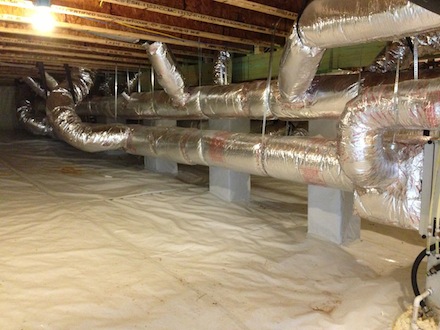 Another method, which isn't shown in that paper from NREL, is to put the ducts in a conditioned crawl space, as shown above. This was a house that I visited in Nashville recently.

I've just shown you the bare minimum here. The devil is indeed in the details, though, and you're in luck. The Earth Advantage Institute out in the Northwest (US) has put together a great resource for designers, builders, trade contractors, or anyone trying to figure out exactly how to get your ducts inside the conditioned space. They have a website called Ducts Inside, and it's packed with great information: implementation strategies, a training manual, case studies, and more. Check it out!

Finally, let's get to that one bad way to get ducts inside that I promised you. The photo below, from HVAC hacks and other screwups, shows it in all its glory. 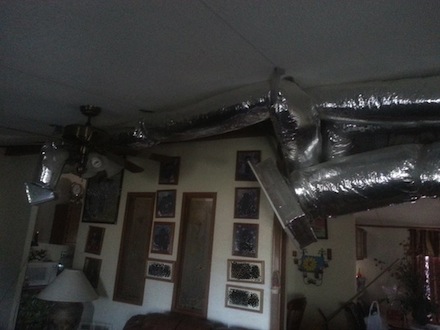 Wow! Uh...that isn't really what we mean when we say to put the ducts inside. Yes, they're definitely in conditioned space, but I have a hard time trying to figure out how someone decided to do this.

Addendum: A word on new homes vs. existing homes

Snakes in an Attic — The Ductopus's Cousin Strangles Bath Fans

Very well done and straight to the point!
However, to change the location of existing duct work can be very difficult and expensive. Many times just sealing the existing ducts and adding enough blown in fiberglass insulation to cover them is a better value.

Don P.: Yes, I should have mentioned the issue of existing homes vs. new homes initially, and your comment spurred me to add that to the article. Thanks, Don.

geoff h.: Yes, that issue has come up before in comments to our blog. John Tooley even commented about it here. I've threatened to write an article about that issue and haven't gotten around to it yet. Thanks for the reminder!

With existing homes, many times it's just not possible to get ducts out of the attic without considerable expense and mess. Therefore either reflective roofing (cool roof) or cathedralized insulation are the sane choices here. My experience with reflective roofing on my own pad has been positive; attic temperatures seldom run higher than outdoor ambient temperatures, and a/c supply air temperatures show little gain from plenum to most remote supply air register. House can be maintained at a 75 degree setpoint on 1st stage on a 100 degree day with ease.

For new construction, ducts in attics should be completely eliminated. There's no excuse to not accomodate them within conditioned space, but it's hard to buck the tide in this area. It doesn't get prospective home buyers to sign contracts, for the most part, so the ducts get thrown into the attic to make way for granite countertops and commercial range hoods.

Here in SE PA there are large numbers of new (and not so new) homes with the second HVAC system in the attic outside the thermal envelope. Local code officials require both the HVAC unit and all ductwork to be above the insulation on the ceiling below. Often the equipment platform is not raised to allow full insulation depth and the flex duct is sagging between supports after leaving the body of he "ductopus". Lousy design and installation is OK, as long as you can see the entire system - so how do they allow ducts between floors and inside walls?

We (Earth Advantage) worked with NEEA to create ducts inside dot org: http://ductsinside.org/
There are lots of great (free) downloadable documents that cover these same concepts with greater detail for builders and design teams.

Thanks for making time to pen (?) yet another informative and entertaining article. A twe-fer, if you will.

Regarding the linked article, "Beautiful Duct System...", there is a photo of a system in an encapsulated crawl space showing provisions for supply off one of the trunk lines. We're any special provisions made for return air?

I encapsulated my 2002 crawl space a few years back after I discovered a 4" supply line had been installed vertically from the attic distribution system. The floor above the crawl was so well sealed, there was no air flow from the 4" duct unless the closet crawl space access was open and I finally installed a return grill there.

Warm(er) hardwood floors in the heating season are wonderful and no discernable effect on heating costs. Would have been hard to notice unless it was dramatic.

Cameron T.: Yeah, keeping the heat out of the attic to start with is a great strategy if you're not going to encapsulate the attic. I wrote about shingle temperature and attic ventilation for Green Building Advisor a few weeks ago, and there's some good info there about this topic.

Anthony H.: Yeah, I've seen a lot of attic HVAC systems like you describe. It's nice that things are changing a bit, at least with some contractors, though.

Steve W.: Yes, that house had a transfer grille through the floor so the air put into the crawl space could make its way back into the house and through HVAC system. That's how Joe Lstiburek did it in his house, too.