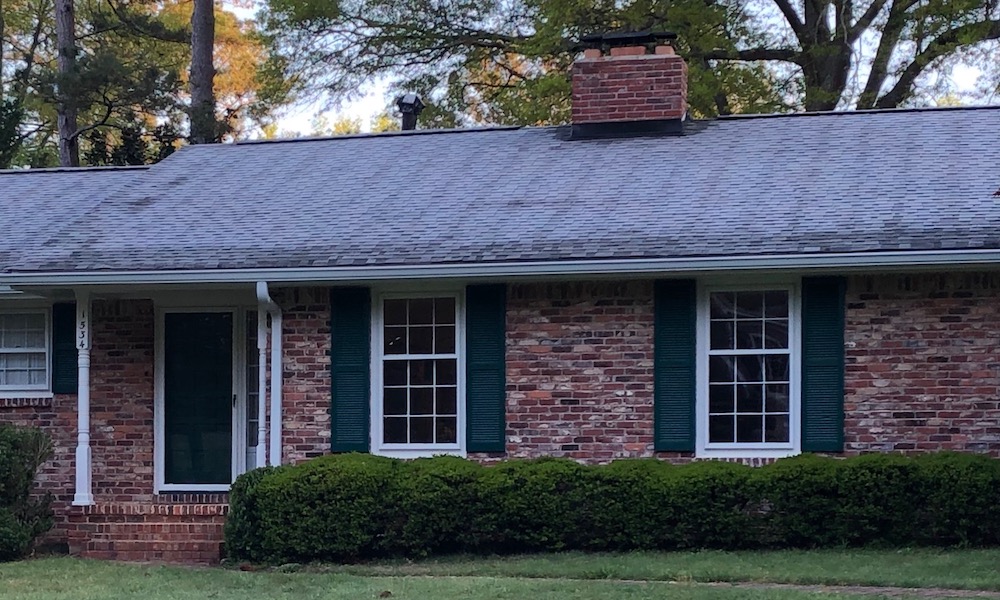 My house exhibits an interesting phenomenon on occasion.  A lot of people who understand building science sometimes jump to the wrong conclusion when they see it.  Hey, I did the same thing myself at first, too.  The puzzle lies in the frost pattern you see on the roof in the photo above.  And since it’s my house, I’ve seen it a few times.

Before I get into discussing the physics of frost here, though, let me point out that I don’t have a typical attic.  The insulation in my attic is on the underside of the roof deck.  It’s not on the attic floor.  I used open-cell spray polyurethane foam (SPF) to insulate the roof deck and bring the attic inside the thermal enclosure.  That makes a difference in what’s going on here.

The pattern you see above is called ghosting.  You can see “ghosts” of the rafters because of a lighter frost pattern on the shingles directly above the rafters.  (A similar thing can happen on walls with ghosting of studs.)  But the puzzler here is about why that frost is thinner above the rafters.

The conclusion people often jump to is a logical one.  It’s that there’s more heat loss from the attic through the wooden rafters than there is through space between the rafters.  The wooden rafters can act as a thermal bridge, allowing more heat to flow through that pathway.  The other pathway is through the insulation-filled cavity between the rafters.  Insulation has a higher thermal resistance (R-value) than wood, so the wood acts as a thermal bridge.

The photo above shows part of my insulated roofline as it looked when I bought the house in 2019.  The spray foam is between the rafters.  But you also can clearly see each rafter because the spray foam installer didn’t spray over them.  If this had been the state of my attic when I took the photo of the frost, thermal bridging would indeed be the answer.

Not long after I moved into the house, however, I had Woodman Insulation come in and insulate the attic properly with SES SucraSeal spray foam.  (Disclosure:  Woodman and SES provided their services and products for me at no cost.)   I had a lot more foam installed so that it completely covered the rafters.  There’s a good four inches or so over each rafter now and even more at the ridge.  The photo below shows what the attic looks like now.  There’s no hint of where the rafters are now.

What that means is that the wood rafters now have a thermal break.  The insulation over each rafter greatly reduces the heat loss through the wood.  And with as much insulation as I now have on the roof deck, there shouldn’t be much pathway difference at all between heat loss from inside the attic  to the outside.

So why the ghosting?  James Symanski, an engineer, had the perfect answer when I posted a similar photo on LinkedIn:

“Residual heat retained in those areas by the extra mass and [temperatures] not low enough for long enough to extract that extra heat.”

In other words, it’s not thermal bridging.  It’s thermal mass.  As the outdoor air cools off at night, the roof starts cooling.  The materials above the insulation-filled cavities cool off faster than the materials above the rafters.  The difference in cooling rates stems from the extra mass of wood in the rafters.  It takes longer to cool them down.  And that means they’re slower to be covered with frost.

Also interesting here is that the photo of frost on the roof occurred after a night when the outdoor temperature didn’t get any lower than 39 °F.  Night sky radiation can cool a roof from several degrees above freezing—seven in this case—down to freezing and below.

And now that you have a perfect understanding of this phenomenon, you can hold your own with the most sophisticated building science professionals!  Or at least look at roofs with a new appreciation for the kinds of heat loss that happen there.

Why Doesn’t Frost Form in the Carport?

Can an Exhaust Fan Control Humidity in a Spray Foam Attic?