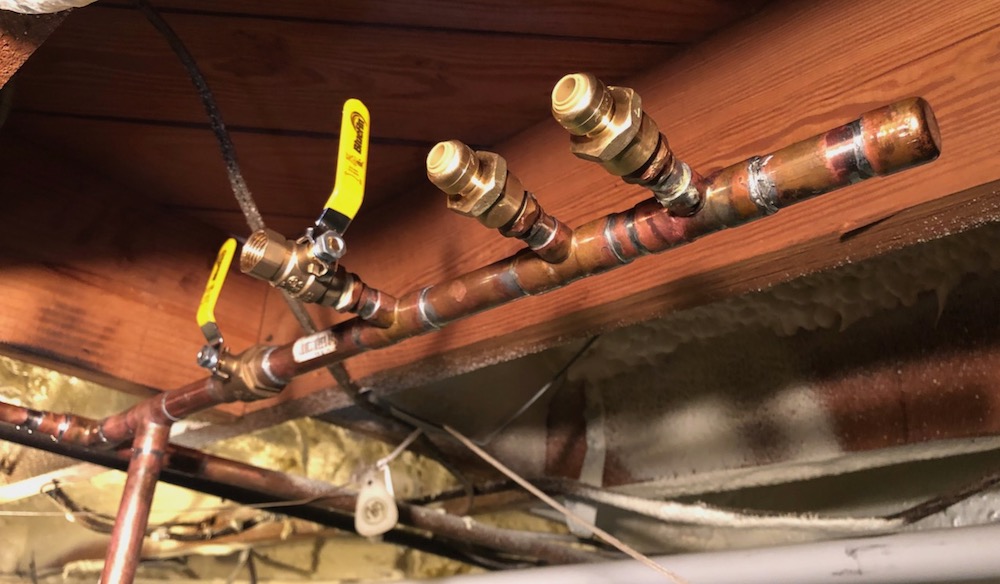 Did you know that some plumbers stuff a wad of white bread (sans crust) into a pipe before they solder it?  That’s one of the things I learned during my weekend plumbing adventure.  More about that later, though.  The purpose of of my weekend plumbing exploits was to cut the wait time and wasted water for three of my hot water fixtures.  It takes 2.5 minutes for the hot water to reach my kitchen sink and a minute for it to arrive at my shower.  So this weekend I tore into my plumbing with the aim of improving the hot water delivery to those two fixtures plus my bathroom sink.

My plan for this hot water retrofit is based on the one I wrote about last year.  My friend David Wasserman had long wait times for hot water, too, so he installed smaller pipes that bypassed the longer, larger pipes.  Like he did, I built a manifold for the bypass runs.  You can see it in the lead photo above.  What I’m doing differently, though, is eliminating the original run to those fixtures.

The photos above and below show the part of my hot water plumbing that I worked on.  They’re the same photo, but I highlighted the sections I replaced and added.  The manifold is the part on the left.  To give you perspective, I was crouching near the water heater (bottom right) and looking up toward the mechanical room ceiling.

The manifold has three ports, one for each of the fixtures.  It’s basically just 3/4″ copper pipe with tees for the three ports.  The ports come off at 1/2″ size and then go to a threaded adapter that connects to a Sharkbite push fitting.  Then, PEX tubing goes from those fittings to identical fittings near each fixture.  I’m using 1/4″ PEX for the two bathroom fixtures, which are about 8 and 18 feet away.  For the kitchen, I’m using 3/8″ PEX.  (See my article about Wasserman’s retrofit for details about the parts I used.)

The good news here is that I was working only on the hot water lines, so I didn’t have to turn off all the water in the house.  Because you know where this is going, right?  I soldered the manifold together a couple of months ago.  Since I did it on my portable workbench outdoors, it was pretty straightforward.  It was also a good way to learn to solder copper, which I hadn’t done before.  (Now you really know what’s coming!)

Installing everything in place, though, presented challenges I didn’t have on the workbench.  Plus, I should have reviewed the soldering videos I learned from and studied up on installing whole assemblies.  After working most of Saturday on this project, I finally had it all put together at about 7 pm.  So I opened the valve and…

Water was spurting everywhere.  It was a mess!  One fitting was leaking quite a bit, but others were leaking, too.  I don’t know how many of my 20 solder joints were leaking because I didn’t want my mechanical room to get any wetter than it already was.

After closing the valves, I tried to do some repairs.  That didn’t work.  I gave up at about 9:30 pm Saturday, frustrated and dispirited.  I was afraid I’d never be able to get it to work and was feeling down about the whole project.

The next morning, I went back to the YouTube videos on soldering copper pipe and did some reading, too.  I studied what I had done and found several mistakes I had made (fittings too hot, fittings not hot enough, not dry-fitting everything before soldering…).  Then I made a list of stuff to buy and headed off to Home Depot.

Upon returning, I disassembled a lot of what I had done the day before and started over.  I also bought some tools that made the work go smoother (see below).  It took me all of Sunday, but I finally had the system ready to test at 6 pm.  I crossed my fingers and opened the first valve.

Then I opened the second valve.  There were 14 more solder joints to be tested here.  And…

They also were leak-free.  Whew!  What a sense of relief I felt.  I really did not want to have to call a plumber to come do cleanup on my DIY job.

I don’t have the three new runs going yet because there wasn’t enough time.  After that huge sense of relief, I celebrated with a couple of Moscow Mules in the backyard.  You can see the current status of the manifold below.  Starting from the left, there’s a shutoff valve for the manifold.  The next port is the one going to the kitchen.  I’ve got a valve on it temporarily because I’m going to do this run later.  It requires going all the way to the back of my encapsulated crawl space, so I want to have plenty of time for that.

The two runs to the bathroom have the white PEX tubing inserted into the push fittings at the manifold.  They’re not connected on the other end yet, though.  I’ll need to turn off the hot water again to do that, and I’m waiting till Thursday to do that.  My wife goes out of town then, so it’ll be better for my prospects of staying married if I do it while she’s away.  (You know, like that time I gutted the bathroom in my condo while she was gone for a week.)

Let’s start with the topic of putting white bread into a pipe.  The reason some plumbers do that is that it’s difficult to solder a leak-free joint when there’s water in the pipe.  Stuffing a wad of crust-free white bread into the pipe can absorb and block the water long enough to solder.  But my wife raised the concern about bacteria in the line afterward, and so did one of my LinkedIn connections.  So instead, I used my shop vac to suck as much water out as I could and then blow the rest as far back as possible.  And now I have a loaf of Wonder bread that I’m wondering what to do with.

Another lesson I learned is that the right tools can make a big difference.  My copper tubing cutter (below left) does a fine job of cutting pipe, but it requires a clearance of about 15 cm around the pipe to do so.  Sometimes joists and other obstructions don’t give you that much space.  The Autocut tubing cutter,* the orange and grey donut in the center of the photo, cuts well and requires little space.

The other tool I loved finding out about was the deburring tool* on the right.  It’s a huge upgrade from the dull blade that comes on the backside of the standard tubing cutter (the triangular piece pointing to the left). It’s soooooo much better and faster than that other one.

Of course, I had to learn how to solder copper pipe (also known as sweating copper) and retrofit a plumbing system to make all this happen.  Some of the best videos I found on learning to sweat copper are on the Got2Learn YouTube channel.  I started with his How to Solder Copper Pipe the CORRECT Way and watched several of his other videos, too.

And then there are the personal lessons.  I may be getting old, but I can still learn new tricks.  But the other side of getting old is there, too.  I was stiff and sore after a full day’s work on Saturday.  I was even having back cramps, which I’ve never had before.  But the biggest lesson—which isn’t new to me—is that you’re always going to hit some roadblocks.  It’s how you respond when you hit them that determines your success or failure.

A Hot Water System Retrofit for an Old House