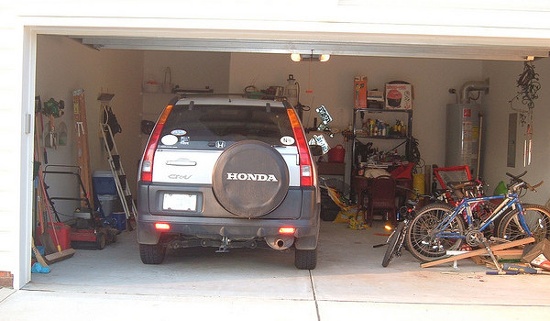 If you have an attached garage where you live, the odds are high that your indoor air quality is worse than a home without an attached garage. Just take a look at the photo below to see some of the sources of pollutants that can get into your home’s air. How many do you see?

If you have an attached garage where you live, the odds are high that your indoor air quality is worse than a home without an attached garage. Just take a look at the photo below to see some of the sources of pollutants that can get into your home’s air. How many do you see?

Even without zooming in, I can spot five significant sources. The car is the biggest, of course. Every time it drives in or out, exhaust, including carbon monoxide, from the tailpipe enters the garage. On the left you can see a lawn mower and next to it a gasoline container. In the back is a gas water heater (in this case a direct vent type, which is a safer model than the standard natural draft type). To the left of the water heater are shelves full of various things, which may well include pesticides, fertilizers, and other stuff you don’t want to breathe.

So the typical garage has a lot of bad stuff in it. You may not notice the smell in your own garage because you grow used to it after a while, but I often notice a toxic odor in garages. What can you do to keep that stuff out of the air in your home? The first step, of course, is to isolate the garage from the house as well as possible. (See the related articles list below for information on how to do that.)

There’s another thing you can do to keep that garage out of the house, too. Ventilate! With an exhaust fan in the garage, you can do two things to improve your indoor air quality. First, when the fan runs, it removes pollutants from the garage air and sends them outdoors.

Second, the exhaust fan puts the garage under a negative pressure. That way, when you open the door between the garage and the house, air is more likely to flow from the house to the garage rather than from the garage to the house.

You’ve got a few options here. You could set it up to run continuously, of course. If you’ve got a lot of nasty, offgassing stuff out there and you really don’t want to get rid of it…well, my question to you is why the heck not? Build a shed out back. If you’ve already got a shed that’s stuffed to the gills, you could do like Arthur “Two Sheds” Jackson and think about getting a second one.

Rather than running the garage exhaust fan continuously, you could install a switch in the garage and control it manually. That’s not a great solution, though, because it often won’t be running at the time you need it to run. Say you drive into the garage, the overhead door closes behind you. You’ve trapped some pollutants in the air but you have to get out of the car and turn the fan on before it starts removing them.

The best solution, in my opinion, is to use a controller like AirCycler’s GarageVent. When you install it, sensors wired into the doors will turn the exhaust fan on whenever a door to the garage is opened. Then the fan runs for a set amount of time (0 to 2 hours) after you close the door. You can also set it to run based on temperature. Check it out.

Having said all that, installing a garage exhaust fan may or may not solve your problems. Here are some things that might negate or reduce the effectiveness of your fan, or even cause more problems.

As always, the devil’s in the details so make sure you either understand what’s going on and can measure the effect of a garage exhaust fan or you hire a pro who does and can.

Now, where do you think you’ll put that second shed?

Are You Making These Mistakes with Your Garage?

Photo of garage by Rubbermaid Products from flickr.com, used under a Creative Commons license.