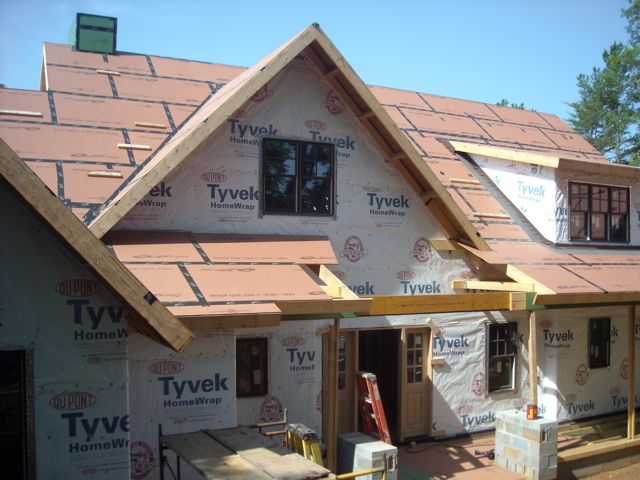 Once you understand that air can move both ways, it’s clear that you’d want an air barrier that works in both directions. Right? But when we test homes for air leakage, we pretty much always test them in only one direction: from outside to in. We put the house under negative pressure with a blower door and then measure the air flow through the fan, which tells us how much air is leaking in through the building enclosure.

I’ve written in the past about how house wrap is far from ideal as an air barrier. It can be a great drainage plane, however, and that should really be its primary purpose when you use it on the outside of a house. (As some unfortunate homeowners in Kentucky found out recently, trying to build a house without any kind of drainage plane leads to trouble.)

A couple of years ago, I did a little research project† for Huber Engineered Woods. (Disclosure: They were Energy Vanguard’s client and paid for this work.) They wanted to find out how air leakage through their Zip System wall sheathing compared to house wrap. Our objective was to test the same home for both infiltration and exfiltration with two different air barrier conditions:

The builder framed the house as normal. They used Zip Wall sheathing and Zip Roof decking but left the walls untaped for the first test. They installed house wrap over the walls and sealed according to the manufacturer’s instructions. They set all windows and doors and sealed the house to the point where we could do the blower door testing. They also taped the Zip Roof decking and sealed all penetrations since the ceiling drywall was not in place. When the house was ready to be tested with house wrap, we ran single-point blower door tests in two configurations – positive pressure and negative pressure, both at 50 Pa relative to outdoors.

After the first test, the builder removed the house wrap and taped the Zip Wall seams. They had the house ready for the taped-sheathing test 10 days after our first test, so we came in and retested the house, as before.

The results for both tests are below. The ACH50 is based on the house volume of 52,113 cubic feet.

Putting the results in perspective

Even with the house wrap, this house was very tight, having infiltration and exfiltration rates of 1.36 and 2.40 ACH50, respectively. As we observed, the builder had taken great care to seal the house wrap completely, and that effort showed in the results.

In a typical installation, the bottom edge of the house wrap is left unsealed. Seams are often taped poorly or left untaped. Numerous rips and tears keep the house wrap from lying flat. Sometimes siding installers cut the house wrap in the corners because the house wrap doesn’t lie flat there. If this house had the typical amount of extra leakage sites that these problems introduce, the initial test would have shown significantly higher leakage.

Also, since this was a large house, much of the wall sheathing did not break over studs or plates (see photo below). Many of the seams that fell over open areas in the framing showed large gaps, as shown in the photos below. These gaps can allow a lot of air through, and that’s probably why the exfiltration result was so much higher than the infiltration result in the house wrap test. Still, even with such a low starting point for the air leakage rates, the taped Zip Wall sheathing performed significantly better – 20% for infiltration and 56% for exfiltration – than the house wrap used as the air barrier. Because the house wrap installation was better than normally observed in the field, these improvement numbers can be taken as a lower limit of how much better Zip Wall sheathing will perform compared to houses that rely on house wrap, at least when comparing houses of similar wall complexity. In smaller houses where all or most of the sheathing breaks over studs and plates, the effect may be less pronounced.

The really neat thing about the project is that we used the same house to test two different systems. In the end, though, this was only one house, and it wasn’t finished. It would be nice to see this work extended to more houses with more configurations.

As I wrote in 2010 (before Huber ever contacted us), house wrap is not an ideal air barrier. If the builder takes great care, house wrap can perform well as an air barrier, but the typical installation leaves a lot of holes. What this research shows, at least for a house without cladding, is that house wrap works better for buildings under negative pressure than for those under positive pressure.

The key takeaway from this initial work is that if you’re looking for really high levels of airtightness, you should seal the sheathing when you use house wrap. Taped sheathing‡ products, like the Zip System or taped foam board, will probably have lower air leakage than homes with house wrap and unsealed sheathing.

† I say it was a ‘little’ research project because it wasn’t a scientifically rigorous study whose results establish a general truth. It’s one quick look at a particular phenomenon and it deserves more study. I worked on the project with Al Landers, PhD (now retired), Allen Sealock, and Danko Davidovic, PhD. Danko is a real building scientist with a degree from one of the best places to study building science: Penn State.

‡ Tape is quite the controversial topic in building science circles, and some people don’t trust it. Joe Lstiburek, PhD, PE, is not one of those people. “Residentially we now use tapes on wood sheathings and foam sheathings  to provide water management and air management. So how well do these systems actually work? Now? Real well. In the early days? Not so good.” Read his article, Stuck on You.