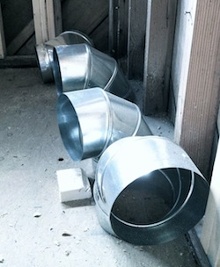 Mini-split heat pumps and ductless go together like peanut butter and jelly. Or do they? If all mini-splits were ductless, then why were those rigid elbows sitting on a jobsite I visited recently? That home is going to be heated and cooled entirely with mini-split heat pumps.

Mini-split heat pumps and ductless go together like peanut butter and jelly. Or do they? If all mini-splits were ductless, then why were those rigid elbows sitting on a jobsite I visited recently? That home is going to be heated and cooled entirely with mini-split heat pumps.

The answer, of course, is that there is such a beast as a ducted mini-split heat pump. We’ve actually done quite a few HVAC designs where we specified them for the job, as is the case with the jobsite mentioned above. When designed, installed, and commissioned properly, they work beautifully and efficiently. The homeowner may not even know their HVAC system is any different from their neighbors.

I like ductless mini-splits, and they’re great…for some applications and some clients. An objection some people have, though, is that they don’t want the mini-split head hanging on their wall. I personally don’t have a problem with them, but I realize they’re not for everyone.

Some people just don’t want to see mechanical systems hanging on their wall. Crazy, I know! But that’s where ducted mini-splits come in. The head is just a mini air handler that hides behind the drywall or under the floor somewhere and does its thing (i.e., heating and cooling efficiently and quietly). What you see above is not the rover we recently landed on Mars or a Turbo Thermo-Encabulator Max with its hydrocoptic marzel vanes exposed. It’s the air handler and ductwork attached to a ducted mini-split heat pump. This one’s in a different home (for which we also did the HVAC design), but it’s the same animal. The photo at left shows what the air handler looks like before it’s installed. This one was waiting to be installed at the jobsite I visited last week.

Yes, the efficiency is a bit lower because pushing air through a duct system takes more energy than releasing the conditioned air into the room right there at the unit, as a ductless mini-split does. When the ducts are designed, installed, and commissioned properly, however, it works very well and can still be very efficient.

Speaking of good duct design, let me show you the beautiful photo I took of the the trunk-and-branch duct design in this house. The photo below shows the supply trunkline, carrying the conditioned air to be distributed to the various rooms, with branches coming off and sending conditioned air through the branches. The trunk is made of rigid sheet metal, for better air flow, and the branches are made of flex duct, for better noise control. Beautiful, isn’t it? (That’s a nice tongue-and-groove ceiling above it, too!) The ducted system overcomes another difficulty of ductless mini-splits, too. It can sometimes be difficult to get enough air flow throughout the house with ductless because it can get very expensive to put heads in every bedroom. With the ducted system, you can give each room just what it needs.