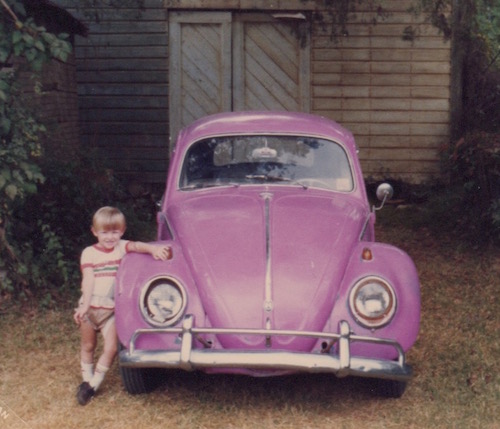 In the summer of 1981, my grandparents gave me a 1961 Volkswagen Bug. I had just gone through my sophomore year at Centenary College of Louisiana without having a car and really wanted to have one for my junior year. The only trouble with this purple car is that it had a blown engine. And I didn’t even know what that meant.

So I took on the project of getting it running again. I got myself a copy of How to Keep Your Volkswagen Alive; A Manual of Step-By-Step Procedures for the Compleat Idiot by John Muir.* Pap-paw let me use his shop, which we called the warehouse because it was part shop and part storage of dusty old fun stuff. I pulled the engine out of the back of the car and tore into it.

That’s when I learned how engines work and what it meant to have a blown engine. In this case, there was a bulge and a hole in the crankcase. When I opened it up I saw that it had thrown a rod…and I learned what a rod actually was. And a crankshaft and a flywheel and valves and all the rest.

I found a really nice VW mechanic in town who ordered parts for me and helped me understand exactly what I needed to do. Without him, this project would have been a lot harder.

Once the parts came in, I set to work putting everything together again. Then the real trouble began. I ran into several setbacks, each of which seemed insurmountable at the time. On one particular occasion, I was so deflated I just had to walk away. I went inside, took a shower, and put some music on my stereo.

My grandmother saw how dejected I was and tried to comfort me. One thing she suggested was to give up and they could help me buy a car that worked.

I told her I just couldn’t do that. I was too far into rebuilding this engine to let it defeat me. So I picked up my tools the next day and got to work again. After about four weeks of working in the hot muggy July weather of Louisiana, I finally got it all put back together.

Then came the moment of truth. I put the key in the ignition, turned it on, and…wanh wanh wanh wanh wanh… It wouldn’t start. I went back to the engine compartment and checked everything I could think of. That’s when I discovered I’d mixed up the spark plug wires and put a couple of them in the wrong places.

Going back to the driver’s seat, I turned the key… I’ve never heard an engine sound as sweet as my newly rebuilt, 40 horsepower, 1200 cc engine did that day.

I was ecstatic! I spent four weeks working on rebuilding that engine and it came to life in my hands. It was beautiful.

I learned a lot of lessons from that experience:

I’ve used those lessons many other times in my life — finishing my PhD, building a house, sticking with Energy Vanguard through some lean, difficult times. It’s always been worth it.

Are you pushing through the hard parts?

Physics Taught Me the Chinese Principle of Success

A Home Performance Trailer as Good as Pap-Paw’s Truck

Curiosity Is the Door to Passion