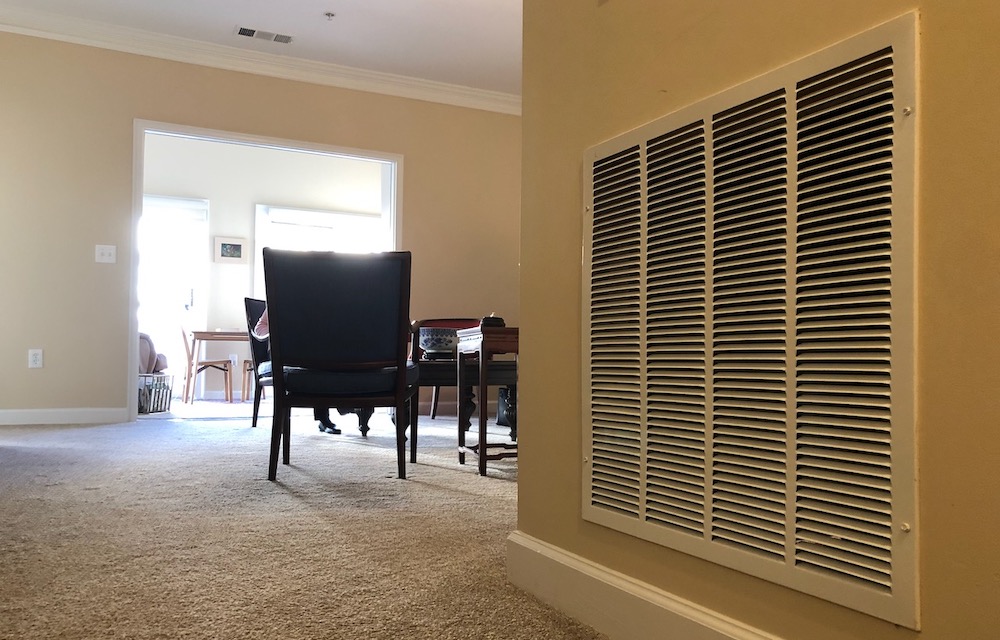 The central vs dedicated return vent debate has a clear winner.  But first, let me explain the terminology.  A forced-air heating and cooling system has supply ducts that blow conditioned air into the rooms of your house.  That’s the part that’s obvious to most people.  But that air has to come from somewhere.  On the other side of the heating and cooling equipment is the return side of the duct system.  It returns air to be conditioned again.

One way of designing the return side of the system is to use a central return.  This design may have a single return vent, or it could have multiple return vents.  In either case, the returns will be in the common areas of the house.  The system serving the bedrooms in my house, for example, has a central return in the hallway.

Of the two types, one has significant advantages.  Can you guess which one it is?

The central return is common on most older houses.  It’s also common in “starter homes” and other less expensive houses.  Because of that, some people think of a house that doesn’t have dedicated returns as being cheap or out-of-date.  We occasionally have HVAC design clients who tell us they want dedicated returns because they don’t want the house to seem cheap.

Another knock on the central return is noise.  I can empathize with that sentiment because I used to live in a condo with a noisy central return.  It was right below the TV in the living room, and we’d have to turn up the volume whenever the system started running.

A final drawback of the central return is that it can cause air flow problems and pressure imbalances in the house.  This problem arises when you put conditioned air into a closed bedroom and don’t have a way for that air to get back to the central return.  The bedroom will build up a positive pressure.  The area near the central return will develop a negative pressure.  The imbalance can reduce air flow, increase air leakage, and possibly even cause backdrafting of a combustion appliance.  That last one can be dangerous, as it could put carbon monoxide in the house.

When you think about the central vs dedicated return debate, though, what are the real problems here?

Why a central return is better

One reason to go with a central return is that you’ll end up with less ductwork.  Shorter ducts on the return side can mean less resistance to air flow.  It’s certainly possible to do low-resistance dedicated returns, but it’s generally easier with central returns.

Central returns also can mean less energy loss if the ducts are in unconditioned space.  Even though return air is not as cool or as warm as the conditioned air in the supply ducts, it still can be a lot cooler or warmer than the air in an unconditioned attic, crawl space, or basement.  That means conductive heat gain or loss.  Of course, you shouldn’t put ducts in unconditioned space at all, but many houses do have that problem.

Another type of loss that happens in the return ducts is through leakage.  Yes, ducts should be airtight with no leakage.  But the shorter your return duct system, the fewer connections there will be to seal.  Also, leakage on the return side will suck in air from the surrounding space, which can cause indoor air quality problems.

And speaking of indoor air quality, central returns are a great way to be able to use high-efficiency filters (MERV-13 typically). The problem with trying to use high-MERV filters is that the resistance to air flow through them is too high.  Increasing the filter area is the solution here.  When it comes to central vs dedicated return vents, the central return makes that easier.

Instead of putting the filter(s) at the air handler, you put it (them) at the return vents.  The photo above shows one of the filter grilles in my house, and I’ve sized them to have a lot of filter area relative to the air flow rate.  Yes, you can do that with dedicated returns, too, but then you have more filters and probably different sizes as well.  We like to size all our filter grilles the same so the homeowner can buy all the same size filters.

How to make a good central return

The central return’s bad rap is the result of poor duct design.  Fixing the design problems can fix the perception problem, too, so let’s see what you need to do.  There are basically two things to pay attention to.

Fixing the noise problem is easy.  Noisy return vents are mainly the result of the blower being too close to the return grille.  The solution is to put some distance and a couple of turns between the grille and the blower.  Another way to reduce the noise is to size the system properly.  Oversized systems have bigger blowers, and bigger blowers are noisier.  Even better, use a small capacity, variable speed system (mini-split), which is quieter than a conventional system.

The solution to the problems with air resistance, heating and cooling losses, and pressure imbalances is to provide return air pathways.  That’s all a dedicated return does anyway.  But you don’t need to have an opening in each bedroom connected to a duct that carries air all the way back to the system.  You just need to have a way to get the air from the closed bedroom back out to the hallway.

One way to provide a return air pathway is to use the gaps around the bedroom door.  We usually talk about this return air pathway as a door undercut, but air can move around the sides and top of the door, too.  Interior doors aren’t weatherstripped and usually don’t fit tightly in the frame, so air can get through all four sides.  This method won’t work with all bedrooms, though.  The amount of supply air put into the bedroom has to be fairly low.

Another return air pathway we use frequently in our designs is the jumper duct.   The photo above shows one roughed in at a home built by The Imery Group here in Atlanta.  The two return vents are covered by blue plastic tape to protect the inside from construction dirt.  The duct goes up and over from one vent to the other, providing a return air pathway when the bedroom door is closed.  Also, a grille on a jumper duct is indistinguishable from a grille on a dedicated return, for those want to see a return vent in every bedroom.

Transfer grilles* are another type of return air pathway.  It’s a grille through a wall or door.  Sometimes it’s a straight shot through one grille and out the other.  Another way is to put a grille on each side of the wall but offset them vertically.  That can provide more privacy than the straight-through type.  The photo above shows one of the Perfect Balance return air pathways* I installed at the condo I used to live in, and it worked great.

In the central vs dedicated return debate, I have to say the clear winner is the central return.  The bad rap that it has among some people isn’t the result of real deficiencies.  It’s because of poor design.  Follow the guidance in this article, and you can have central returns that are quiet, result in less energy loss, and give you better indoor air quality.  Yeah, we’ll give you dedicated returns if you want them, and we’ll make them work well.  But I hope you see the benefits of central returns now.