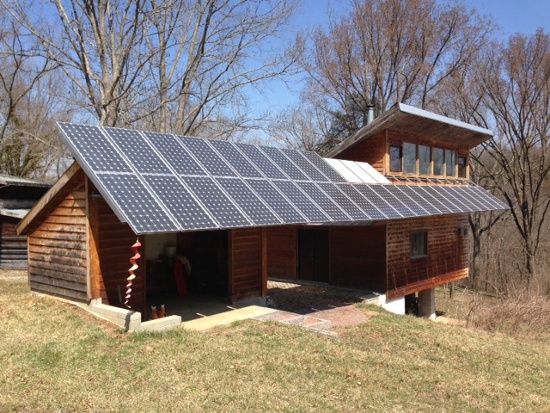 A couple of weeks ago, I wrote about whether homes that produce as much energy as they use should be called net zero energy or zero net energy homes. Several readers offered up another choice: zero energy homes. I’ve also written in the past about four different ways to define net zero energy (the term I’ve preferred). Now, the US Department of Energy has weighed in on both of these debates. Do you know what they decided?

A couple of weeks ago, I wrote about whether homes that produce as much energy as they use should be called net zero energy or zero net energy homes. Several readers offered up another choice: zero energy homes. I’ve also written in the past about four different ways to define net zero energy (the term I’ve preferred). Now, the US Department of Energy has weighed in on both of these debates. Do you know what they decided?

The name of the DOE report is called A Common Definition for Zero Energy Buildings. That gives away their name preference, which they’ve actually been using for a while. They dropped the “net” altogether and assume people will be able to figure out what it means. I’m OK with that. The scientist and grammarian in me wants a more precise term, but I get it.

Sam Rashkin, the Chief Architect in the DOE’s Building Technologies Office, has been presenting on clearing up our language in the energy efficiency community for the past couple of years. I just heard him again last week in Chicago, where he gave the closing keynote speech at the 10th annual North American Passive House Conference.

He always starts by talking about how no one wanted to buy the delectable fish that was called Patagonian Toothfish. But when they changed the name to Chilean Sea Bass, it became a big hit. Words matter.

So, zero energy homes it is. I’m OK with that.

In the introduction of the DOE report, they write, “A zero energy building (ZEB) produces enough renewable energy to meet its own annual energy consumption requirements, thereby reducing the use of non-renewable energy in the building sector.” As I wrote in my article on the 4 possible definitions, things get a little squirrelly when you start talking about how you’d measure the energy produced and consumed. And a couple of the definitions aren’t actually based on energy; one uses energy costs and the other uses emissions.

The two big contenders, though, are whether you base the definition on site energy or source energy.

Site energy. If you burn natural gas on-site for heat, for example, all the BTUs you burn have to be offset with an equivalent number of BTUs produced in the renewable energy production system on-site. Likewise, every kilowatt-hour of electricity you use on-site has to be offset by an equal number of kilowatt-hours produced on-site.

Source energy. With source energy, you have to account for the energy used at the source and in transmission and distribution. Doing the calculations for source energy is less straightforward when the home uses fuels other than electricity.

In the new DOE report, they came down on the side of source energy. Here’s their fleshed out definition:

An energy-efficient building where, on a source energy basis, the actual annual delivered energy is less than or equal to the on-site renewable exported energy.

They also put forth an expanded definition of source energy:

Source Energy:  Site energy plus the energy consumed in the extraction, processing and transport of primary fuels such as coal, oil and natural gas; energy losses in thermal combustion in power generation plants; and energy losses in transmission and distribution to the building site.

I say it’s expanded because they’re including the embodied energy of the fuel burned at the power plant.

Here’s a nice diagram from the new paper showing where the boundary is for determining site energy and source energy. In addition to this definition, they also define something new called Renewable Energy Certificates (RECs), which they define as “tradable instruments that can be used to meet voluntary renewable energy targets.”

If you want to learn more about all this, go to the DOE page on this new Zero Energy Building definition and download the 22 page pdf. They show how to do the calculations and more.

I’ll close with what I think is one of the best things about this paper:

The designation Zero Energy Building (ZEB) should be used only for buildings that have demonstrated through actual annual measurements that the delivered energy is less than or equal to the on-site renewable exported energy.

It doesn’t matter how it models. What matters is how it actually performs. That’s not exactly a common way of thinking in Washington, D.C., where saying one thing and doing another is a way of life.