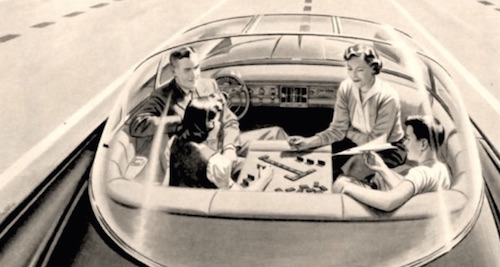 In 2005, I was deep in the throes of my peak oil obsession. I went to a couple of conferences that fall and at the big one in Denver, I met a guy who gave me a little glimpse into the future. I can’t recall his name, but I think maybe he worked for the National Renewable Energy Lab (NREL). He told me something about hybrid automobiles that I’d never heard before.

In 2005, I was deep in the throes of my peak oil obsession. I went to a couple of conferences that fall and at the big one in Denver, I met a guy who gave me a little glimpse into the future. I can’t recall his name, but I think maybe he worked for the National Renewable Energy Lab (NREL). He told me something about hybrid automobiles that I’d never heard before.

What he said was that hybrids, which had been in commercial production for about six years at that time, would allow charging from the grid as well as from the gasoline engine. When the car is parked at home or work, you plug it in to charge the batteries.

But that wasn’t the amazing part. I may have already heard of plug-in hybrids by then, but the gentleman went on to explain how plugging in a car like that could potentially either charge or discharge the batteries.

And what good would discharging the batteries do, you wonder? Go back and read my article about electric utilities and the duck curve. A big problem utilities are facing is being able to ramp up the supply in the evening as the solar electricity supply wanes and demand spikes. One possible source of electricity during that time is the batteries in plug-in hybrids that spend the afternoon charging in workplace parking lots.

Welcome to the Future

What’s happening with the electricity grid is huge, but the thing that really captured my attention this year was self-driving cars. It started when I listened to an episode of my favorite podcast, 99 Percent Invisible, called Johnnycab (Automation Paradox, pt. 2).

In that podcast, Roman Mars talked about cars that would do the driving for us, of course, but the bigger idea was getting to the point where we don’t need to own cars at all. We just call for a self-driving car when we need one. And when all the cars on the road are self-driving, we can reduce lane size because they’ll be programmed with great precision to avoid each other.

The name of that episode also hints to a darker side. Johnnycab was the name of the robot-driven taxis in the Arnold Schwarzenegger movie Total Recall, but hey, let’s focus on the positive here.

I heard of a similar idea on another podcast, The Unconventionals. There’s a company named Bridj in Boston, and they’re somewhere between a taxi and a bus, but optimized with big data on traffic patterns and the movement of people from one place to another. You should check it out. There’s some really cool stuff happening out there that’s changing the world.

A bigger view of smart

I’ve written disparagingly about some devices that are supposed to make your home smarter. So-called smart vents for your heating and air conditioning system and the Mistbox, which mists water near your air conditioner’s condensing coil to help it run more efficiently, are two such products that give smart a bad name. Lloyd Alter has gone further and written an article titled, In praise of the Dumb Home.

On the scale of a single home, a lot of the ideas for making the stuff around us smart doesn’t make a lot of sense. Sometimes it just doesn’t really do what it’s supposed to do. In many other cases it’s just too much for homeowners to keep up with. That’s not to say it can’t work on that scale. Smart lighting controls can be a winner.

On a larger scale, though, using big data to move electricity or people or whatever more efficiently will be a good thing. We’re now on the verge of some big changes as these things start to happen.

Welcome to the future! I think I can see the singularity from here.

My Top 10 Energy Efficiency Articles and Ideas of 2015