It just drives me crazy! When you see news stories in the media about improving your home's energy efficiency, they invariably tell you to caulk your windows and weatherstrip your doors. You know, there are enough home energy raters and auditors now that we oughta be able to cure them of foisting this uneducated advice on homeowners, but it seems to be one of those self-perpetuating beliefs that resurrects itself every year and won't go away (kinda like Brett Favre).

See that photo above? That's just one small section of a gap that allows attic air to move right down into the walls of this house (or from the house into the attic). The whole thing is probably 20' long and adds up to many times more infiltration than this house (or just about any other) gets through all the windows or doors. The discolored insulation shows that air has been moving through that gap. 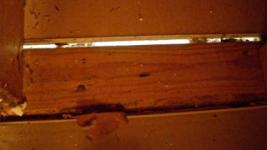 of air leakage in this house, but there are plenty of others. The photo at right shows a gap between the top plate and ceiling drywall, and light comes straight through from the room below because that corner was never taped and mudded. Why? Because there's crown molding there, of course. Why waste labor and materials in a place where it's unnecessary?

Actually, even without crown molding, unsealed gaps at the top plates can produce a lot of air leakage in a house. When a HERS rater does a Blower Door test to determine the infiltration rate of a house, you can walk around and feel the air blowing through receptacles and switches - even on interior walls - because of those unsealed top plates.

So, before you go around caulking your windows and weatherstripping your doors, get up in your attic and seal the real leaks! And you definitely want to air seal the attic before you add insulation. Otherwise, you're covering the leaks with material that will simply filter the dirt but not stop the air movement. 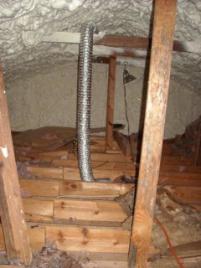 What this homeowner did instead was to make those leaks irrelevant by using spray foam insulation on the roofline, as shown here. That made the ceiling an interior partition and brought the attic inside the building envelope so it's part of the conditioned space (although it's only conditioned indirectly).

The homeowner in this case was Jason Payne of Structured Energies, and he paid for the work by refinancing his home with an Energy Efficient Mortgage. He now has a much tighter, better insulated home and pays less than he did before in monthly mortgage payments and energy bills.

Interestingly, the entire rafters appear to be encased in foam, as they should be to maximize R-Value, and minimize thermal bridging and air infiltration. VERY few foam guys understand the process and try to get away using as little product as necessary. Most often we see 5' - 5 1/2" of open cell in the rafters which equates to R-20 +/- while code requires R-30 ... the building inspectors turn a blind eye. Of course, I would rather have 5 1/2" of open cell than fiberglass because it effective R-Value is higher due to its air-sealing properties, but still, neither are R-30. Looks like a good job to me!

PS ... would have been nice if they had removed that filthy fiberglass insulation ... no reason for that to be in conditioned space.

Yep, they covered the rafters, and it was indeed a good spray foam job. It helps when you have a HERS rater working with them to make sure they do it right.

Paul, I agree it would've been best to take the fiberglass out completely, but they did blow it all to the edges, so that most of the ceiling sheetrock is showing.

Jason is on the leading edge by using what has been around for more than a decade, EEM's!! I look forward to seeing the proliferation of this financing and the opportunities that it 'lends'.

The R-30 debate is one that will be ongoing!! Inspectors have a lot to do and very little to work with and cannot test and verify spray foam like they can fiberglass. A blind eye would be the fact that they are not enforcing the air leakage code, but that is something Martin Holladay has written about in his GBA blog.

In Rem/Rate though, the diminishing returns is evident and reproducible. I want to know if we should be pushing for more thickness and suffer setbacks in tightening the envelope due to a decrease in demand due via an increase in cost by 35+%, or should we be paying attention to ROI and the info that our energy modeling software supplies us and pushing for air leakage testing instead? Two wrongs does not make a right, but is Rem/Rate lying to us? Just take one of your files that has a tight envelope and change the R-value only for the ceiling and see what you get. I may be putting to much faith in Rem/Rate, but the numbers are what we live by...RIGHT?

Allison, what are the proper standards for spray foam for the underside of the roof when changing the envelope/thermal barrier with regard to type of spray foam and depth (here in the northeast vs the southeast and west)?

Asking a production builder to spray over the rafters is not an argument I'm going to win easily. Why? As soon as I go to energy modeling, R-19, not R-30 becomes the minimum! Let's not forget R-30 rated is not R-30 effective. By the time I get a foam depth equal to R-25, I may be lucky to have an R-19 effective -- depending on whether I have 2x6 or 2x8 rafters. I'd like the building code to state what effective R-value they want so I can help a builder achieve. The code is written backwards!

Les, Jason is definitely on the leading edge in the world of EEMs. He knows more about them than anyone else I know. In fact, he's even going to do some training in how to do EEMs, and he's going to have a booth adjacent to ours at the RESNET conference.

The energy code allows for tradeoffs, so R-20 in the roofline isn't necessarily a code violation if the rest of the envelope allows the overall U-value to meet or beat the code.

And yes, energy modeling is a great way to make decisions about which way to go. Absolute numbers don't always come close to actual usage, but when you look at the difference in usage between various scenarios, I think REM does a pretty good job.

Finally, the diminishing returns of extra insulation are real, but you have to look at everything. PassivHaus standards are really tough to meet, but if you get to the point where you can eliminate the big expensive heating system in a cold climate, extra insulation pays for itself. But, as David Butler would say, you also have to look at the cost effectiveness of superinsulation relative to putting photovoltaics on the house. There are a lot of variables.

Since my name was invoked, I'll chime in. Actually, I'm somewhat skeptical of the PassivHaus concept. What Allison is referring to is my concern that super high performance envelopes and HVAC gear are often justified based on some rate of energy inflation. That's fine as far as it goes, but in markets where air or ground source heat pumps are cost effective, it's important to recognize that renewable energy effectively caps energy inflation in a lifecycle cost analysis. For example, if electricity is $0.10/kwh (and rising) and the subsidized cost of PV is currently $0.18/kwh (and falling, at least until 2016), then you won't be far off if you predict the two will intersect at around 13 to 15 cents. In that scenario, it makes no sense to justify (or should I say rationalize) the PassivHaus approach based on electricity costs rising to 20 cents. The analysis is more speculative when fossil fuel prices must be considered.

In parts of AZ, the amortized cost of a PV system per kWh is already lower than grid power. In that case, the cost of any efficiency upgrade must be less than the equivalent in PV capacity at current prices.

Les, REM does a pretty good job with ceilings under vented attics. Not so good with encapsulated attics. Unless AE added support for encapsulated attics in latest version, you have to model attic as a vaulted ceiling for the rooms below (per Dave Roberts when he worked at AE) and then make a judgment call as to how much this over or understates the actual load.

Depending on how you model the duct location, I believe a vaulted ceiling understates the load when used as a proxy for an encapsulated attic, especially if you have lots of uninsulated knee walls. In the case of a bonus room (over a garage), I always specify the thermal boundary at the kneewalls since the space below is unconditioned.

Green Inspector, Building Science Corporation is one of the best sources of info on insulated rooflines. Here's an article you can download from their site about this topic:

Thanks, David. I thought you might step in and explain those tradeoffs between envelope improvements and PV further. It's a good point that you need to understand if you want to determine the best measures for making a home as efficient and cost-effective as possible.