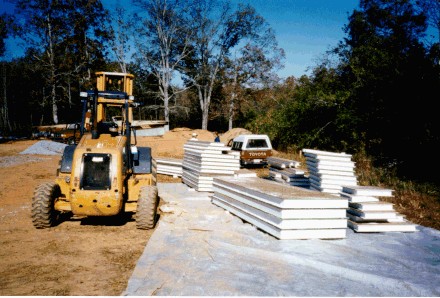 Nine years it’s been already. It’s hard to believe it’s been that long. In 2001, I was building a house out of structural insulated panels (SIPs) – and loving it!

It was an absolutely gorgeous month to spend outdoors in west Georgia. It was chilly at night and sunny in the day almost the whole time. In fact, it rained the night before we started setting the floor joists for the first floor in late October, and then it didn’t rain again until the day after Thanksgiving, when we were almost completely dried in.

The photo above is from Monday, 29 October, the day our first shipment of structural insulated panels arrived. We had a basement and a floor on top of it, so now it was time to start building a box. Steve Tyree, who had taken our architectural drawings and converted them to panel plans, came to help as a tech rep, and he was invaluable. (If you need SIP plans or a tech rep on a SIP job, I highly recommend Steve, who is now also a HERS rater.) He helped us lay the panels out properly when we took them off the truck on Monday.

The next morning we got there early and started putting it all together. With Steve, me, and the three guys I hired to help with the framing, we assembled about two thirds of the first floor walls in one day. And we never did that much in one day again!

One of the keys to getting a good air barrier with SIPs is to seal every joint. Before we put the bottom plates down on the subfloor, we ran a continuous bead of construction adhesive. Before we inserted a spline into a panel, we sprayed foam all the way up and down the pocket. Everything got air-sealed.

The photo above right shows all the first floor walls built, the second floor framed, and the back wall of the second floor installed. At left you see the roof going on. I’d never built anything bigger than a bookcase before I took the project on, and the roof was the most difficult part of the framing. Most of the panels weighed about 200 pounds, and they didn’t go together as easily as the wall panels. We had to use ratchet straps and come-alongs to pull them together.

In the last photo below, notice the two uninstalled panels lying on the front of the roof. The previous Tuesday, we had the boom truck out for the fourth and final time. (I told you the roof was difficult for us!) As the daylight began to wane, we still had 2 panels left, so I told the operator just to put them on the roof and we’d get them in place from there by hand.

Now, these panels weigh about 150 lbs each, and we’re placing them out on the end of the prow roof, which means the majority of each panel cantilevers over the gable end. The top and bottom of the panels attach to the ridge and eave beams. We aborted our first attempt when none of us felt confident in the rather wimpy rope and ratchet strap we were using to drop the panel over the edge. I bought a 1 ton come-along, a heavy duty ratchet strap, and some better rope, and although it was still scary to push that first panel over the edge, we avoided catastrophe.

What a great month that was! And what a great way to build a tight, well insulated house. One of these days, I’ll get the chance to build another house, and I plan to use SIPs again. There’s a lot of good info about SIPs if you’re interested in finding out more, and the Structural Insulated Panel Association is a good place to start.

Building Your First House as an Owner-Builder