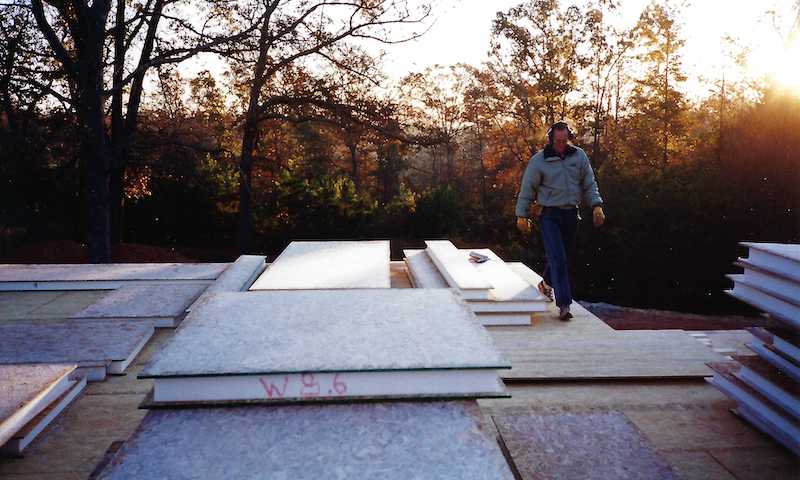 Building your first house as an owner-builder can be hectic, nerve-wracking, and wildly exhilarating.  I experienced all those things and more when I built a house for myself 20 years ago.  I’ve written a bit about it here in the Energy Vanguard Blog, but not for a while.  I’m going back to this topic now because of four things.

First, it’s the 20th anniversary and it’s November, which was the most exciting month of all during my two years of building the house.  Second, I’ve had to go back and find photos to put in the building science book I’m writing.  Third, I had a call this weekend with someone whose book helped me understand the logistics of contracting your own home.  And fourth, I also spoke with the builder I hired to help me run the show during that critical period from having a foundation in the ground to being dried-in.

If you’re building your forever house, as I was, let me share with you what my experience was like and give you some pointers.

The problem is that this is the first time you’re building a house.  In my case, I’d never built anything larger than a bookcase, but I got the project to the finish line.  The main thing I would change if I could go back is to spend more time planning.  I thought the project was going to take two months once we started building walls.  I was wrong.  It took nearly two years.  If I had delayed breaking ground for six months and done more planning, I could have cut the construction time and saved money, too.

From foundation to dried-in

The problem was that I’m the kind of person who jumps in and then figures out how to swim.  So we began shortly after getting the building permit in September 2001.  (Yes, that month.  It was a weird time.)  We got the hole for the basement dug in late September, had our basement walls a month later, and were ready to start framing at the end of October.

Our structural insulated panels arrived on 29 October, and we started erecting the walls the next day.  That’s Steve Tyree on the ladder in the above photo.  He drew our panel plans and helped as a SIP consultant to get us started.  (That’s him in the lead photo, too.)  It’s hard to know which day during the whole two-year project was most exciting because there were so many (along with a few depressing days).  But starting with those first floor walls would certainly be in the top three.

There’s a story with that back wall, too.  We got about half of it installed and then had to tear it down.  The panels came pre-fabricated so that the openings for all the windows and doors would be in the right places.  Of course, that depends on installing the panels facing in the right direction.  As we got to the second window opening of that wall, I looked at the plans and noticed the openings weren’t in the right places.

The walls went up quickly.  Setting the roof panels took almost as long.  The back side was relatively easy.  The roof panels, being thicker than the walls, took more work getting them mated securely.  The front of the roof was harder.  It had two valleys, which meant cutting a lot of bevels on the splines.  More than once we had to send a panel back to the ground because we cut the bevel wrong.

Ah, the roof is almost finished.  Except there’s a story with those two panels sitting up there.   Those panels weigh about 150 pounds each, and we had to place them out on the end of the prow roof.  That meant the majority of each panel cantilevered over the gable end. The top and bottom of the panels attach to the ridge and eave beams.

We aborted our first attempt.  None of us felt confident in the wimpy rope and ratchet strap we were using to drop the panel over the edge.  So I ran to the big box store and bought a one ton come-along, a heavy duty ratchet strap, and some better rope.  Although it was still scary to push that first panel over the edge, we avoided catastrophe and got them set.

With all the roof panels in place, the last step before getting felt on the roof was putting in the rest of the long screws that secured the panels to the wall framing and ridge beams.  On Thanksgiving day 2001, I spent the whole day up on the roof by myself screwing down the panels.  Then we went to my friend Perry’s house and had a nice meal.

The long stretch:  From dried-in to living-in

By mid-December 2001, we had the house dried in.  I thought we were almost done.  Oh, how wrong I was.  (Have I mentioned it took two years?)

I won’t give you a blow-by-blow of everything that needed to happen, but here’s a snapshot at how things progressed:

Winter 2001-02.  Did interior framing, back porch, front porch, and carport.  My dad died in January, which set me back in more ways than one.  We also had started the electrical work in the fall and that continued.

Spring 2002. Got the siding installed and did most of the exterior painting. Doing some of the painting myself in May 2002 was great therapy. Wiring continued.

Summer 2002.  I framed the interior stairs (finally!)  Put screen on the back porch.  Started installing the tongue-and-groove ceiling on the interior.  Wiring continued.  Got drywall in early July.  Started doing tile floors.  I worked full time on the house.

Fall, winter, spring 2002-03.  I was teaching physics at a local university so things slowed down.  Continued with lots of details:  trim carpentry, flooring, woodstove…

Summer 2003.  Installed the greywater system and composting toilet, after an ordeal with the environmental health department.  Installed cabinets, lights, plumbing fixtures, and all those other things that go into a house.  Again, I worked full time on the house for the whole summer.

In August of 2003, we got our final inspection and moved in.  Hooray!  It was a cheery house with lots of light.  I designed it with passive solar features that worked well.  (This may be the only house in Georgia with trigonometry done on the interior wall studs.)

I’ve already given you my most important advice:  Do more planning.  Delay the start if necessary.  But I learned a lot more, too.  When I first embarked on the project, I did two things.  I took a weekend homebuilding class at Southface and bought a book called The Complete Guide to Contracting Your Home.*  Those both helped immensely.  (The third motivating factor I mentioned at the top of the article was talking with the author of that book this weekend.)

Here are some other tips:

Get to know the suppliers in your area.  Some are more helpful than others.  Find a place (or places) that will not only can sell you materials but also connect you with other people.  I bought most of my materials from Home Depot, and the crew at the Carrollton pro desk were super helpful.

Buy the tools you need.  I made the mistake of renting some things at first before I finally bought them.  I could have saved money by buying them upfront.  Of course, this doesn’t apply if you’re subcontracting everything.  I did a lot of the work myself, with hired laborers sometimes.

Get help with the framing.  If you’re planning to contract the house and do a lot of work yourself, get yourself an experienced framer to help if you haven’t done it before.  Dan Shaw was a builder and carpenter who was essential in helping me go from foundation to dried-in.

Find a good all-around contractor.  For me that was Bright Construction from Franklin, Georgia.  They wrapped the house with felt, installed the windows, framed the carport and back porch, and put up some of the tongue-and-groove ceiling.  They were a great resource!

Plan on it costing more than you think.  I don’t know if there’s a financial equivalent of Hofstadter’s Law, but there should be.  I made decisions all along the way that cost me more than I had planned.  (The tongue-and-groove ceiling was one of them.)  And one thing that makes it cost more is when it takes longer.  The bank charges interest on that construction loan every month.  But hey, this was going to be my forever house, so I wasn’t about to skimp.

I absolutely loved building my own house, my forever house!  The planning phase was exciting because I could imagine it all coming together.  The sitework and framing was my favorite part because we went from bare land covered by weeds and privet to a hole in the ground to a foundation to something that looked like a house.  The last year and a half had its ups and downs, but just seeing the house develop at every stage of the way gave me great joy.

Yeah, there were low moments, but the satisfaction of seeing it all come together, the feeling of accomplishment, is something I’ll always remember.  Even though it didn’t turn out to be my forever house.  I lived it for three years, and it was the most comfortable, energy efficient, inspiring house I’ve ever lived in.

There was a while when I thought I’d get the chance to build another house.  I wanted the chance to do it all over again without making the mistakes I made the first time around.  Two years ago, however, I bought a house that I love.  My wife and I have been fixing it up, and it’s going to be our forever house.  (Right?)

Green Home Building, a page with a description of the house and links to other articles about it

My New Project: A 1961 House With Home-Performance Angst, the home I live in now

How to Fix a Leaky, Underinsulated Exterior Wall, a bathroom remodeling project in the condo I lived in 2008-19