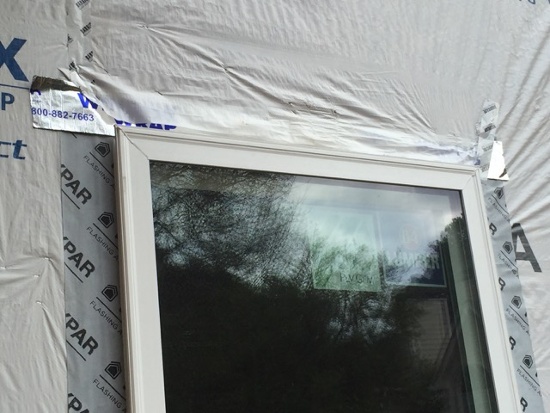 But let’s step back and take a look at the bigger picture for this house. The photo below shows that same window — and what’s above it.

The first thing to note is that we have a design failure. There’s a window right below that roof section. And there’s also this thing called gravity, which still likes to pull things downward. Water hitting that roof could lead to failure at that window or on the wall unless all the details are done properly — and maintained.

See any potential problems at that roof wall intersection? Let’s zoom in.

In addition, there’s no flashing behind the house wrap right below the bottom course of step flashing. Even if they came back and put tape all over that area, it’s in the wrong place. Water could be coming down behind the tape.

Here’s what the house looks like now that it’s finished.

It may be a little hard to see in this photo, but there’s no kickout flashing here. That’s another detail that can help keep the water away from that wall as it comes down the roof when it’s raining. (Here’s a nice article on Fine Homebuilding‘s website showing how to install kickout flashing.)

I’ve written a lot about the importance of being a building enclosure control freak. Controlling the flows of heat, air, and moisture (both liquid and vapor) is critical to achieving comfort, healthfulness, durability, and energy efficiency. Of the four things to control, though, liquid water is the most important. It can cause a building to fail more quickly than any of the others.

Unfortunately, a lot of builders are still putting houses like this on the market. The kinds of problems I found in the one described here aren’t rare. And home buyers who see only the final product have no way to know that there’s a ticking time bomb built into their new home.