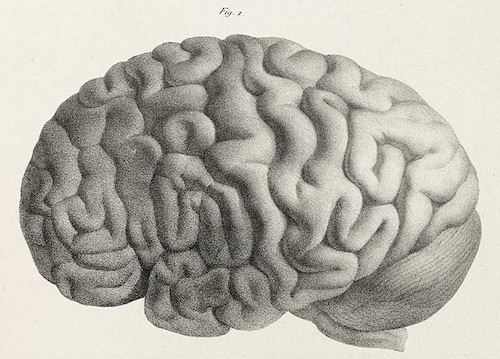 I’ve been reading a lot of BS lately. No, I’m not talking about blood sugar. It’s brain science that’s captured my attention. Understanding how the human brain works, why we do the things we do, and what common illusions often lead us astray. What I want to talk to you about today, though, is foam insulation and global warming, but first, we have to talk about calamari.

I’ve been reading a lot of BS lately. No, I’m not talking about blood sugar. It’s brain science that’s captured my attention. Understanding how the human brain works, why we do the things we do, and what common illusions often lead us astray. What I want to talk to you about today, though, is foam insulation and global warming, but first, we have to talk about calamari.

This has nothing to do with any visual similarity between calamari tentacles and grey matter. Instead, let me relate a story first told on This American Life in 2013. Let’s say you go to a restaurant and order fried calamari. The server brings it and you and your friends start munching away. Well, all but one of you anyway.

Your friend Kim is just sitting there, not partaking of the fried delicacy you’re all enjoying so much. Even worse, he’s grimacing while watching the rest of you eat. So you ask him what’s up…and then wish you hadn’t.

Calamari served in restaurants, he tells you, is often not calamari at all. It’s really hog rectum! Farmers package it as imitation calamari and that’s what a lot of restaurants serve now, he says.

Disgusting, right? A lot of people who have heard that story, first taken mainstream on that 2013 This American Life episode, think so. The truth, however, is that there’s really no evidence to support that claim. It’s an urban legend. So will you eat calamari tonight?

I’ll come back to the calamari in a bit, but first let’s look at foam insulation and global warming. I promise it’ll make sense when I’m done here.

Last November I was at a conference when one of the speakers showed a graph with the same data you see below. In the graph, you can see two lines way above the others. And they increase rapidly, whereas the other lines are much flatter. As it turns out, the quantity plotted on the vertical axis is a bad thing. That means whatever it is that’s represented by those two lines at the top must be really bad. I’ve seen these data show up over and over at conferences and in articles since 2010.

The graph above comes from Alex Wilson’s article, Avoiding the Global Warming Impact of Insulation. In it he showed results from calculations of the “payback” of various types of insulation. It wasn’t financial payback, though. He wanted to know how long it would take for insulation to save enough energy to offset the global warming impact of the insulation itself.

Wilson wanted to quantify the relationship between greenhouse gases prevented and greenhouse gases emitted. You can read his article and see a summary of what they did. The graph below is perhaps the main result. It’s the same graph as above with the labels included this time. Payback is on the vertical axis, and lower is better. The two insulation materials he vilified were XPS (not XPF), which stands for extruded polystyrene, and ccSPF, which is closed cell spray polyurethane foam. His calculations showed they would have very long payback periods, and the more of it you used, the worse it got.

“Assumptions are key in this analysis.”

When I first read Wilson’s article in 2010, I thought I must have missed something. So I read it again, more thoroughly. I still didn’t see he got from point A to point B. Even after reading the full article, it just didn’t hold up.

The main problem is they had to assume too much. With a different but reasonable set of assumptions, their results would have looked far different from what they showed. But hey, they told readers upfront that the results didn’t really mean much when they said:

“Assumptions are key in this analysis.”

A few months after Wilson published his article, I wrote a response titled, Don’t Forget the Science in Building Science. In it I laid out the assumptions:

You can go back and read my article for more on my original criticism. The main point is that they really had only one bit of information. It was a guess because manufacturers were tight-lipped about exactly which blowing agents they were using, but it was a good guess.

Really, it all came down to the blowing agents used in the foam insulation materials. That’s the stuff that turns the liquid chemicals into a foam. Global warming potential (GWP) of various materials is a number that refers to carbon dioxide. For example, methane has a GWP of about 36 over a 100 year time horizon. That means it can trap 36 times more heat than the same mass of carbon dioxide.

At the time Wilson wrote his article, most closed cell spray foam was probably using HFC-245fa as the blowing agent. Its GWP is about 1,000. XPS probably used HFC-134a, with a GWP of about 1400. The other foams use water or pentane as blowing agents, and they have much lower GWPs.

In the calculations Wilson reported, the embodied energy of the various insulation materials had little effect on the payback. The biggest factor was the emission of high GWP blowing agents. (Again, those results were based heavily on the assumptions they chose.) That’s why the ccSPF and XPS lines were so far above the rest.

The times they are a changin’, though. Honeywell has a low GWP blowing agent called Solstice. It has a GWP of less than 5. At the Spray Polyurethane Foam Alliance conference last month, I heard that at least one of the big spray foam companies (Lapolla) is using it. More are sure to follow.

Now, let’s wrap this up by getting back to calamari and brains. Researchers have documented that when we’re given bad information, we believe it. And when we’re told later that the information was wrong, we still believe it. How many jurors do you think really disregarded a specious comment from a defense lawyer just because the judge told them to?

I haven’t had calamari since I first heard the hog rectum rumor. I’m sure many others have done likewise. Our brains hold onto the initial information, even when it’s shown to be wrong later.

As I said, I’ve seen this bad information about closed cell spray foam and XPS foam board come up many times in the last six years. I’ve spoken up whenever I could to attempt to get people to understand they shouldn’t base decisions on that misleading graph.

Yes, those two types of insulation probably used—and some still use—blowing agents with high global warming potentials. That’s really as far as you can go quantitatively, though. We just don’t have enough data to make the kind of pronouncement that Wilson did.

And yet this notion persists. The brain likes to hold onto those things that get there first. Even when they’re shown later to be wrong. Even when the one thing those products were guilty of becomes no longer true as foam manufacturers switch to low GWP blowing agents.

I’m going to have some calamari this week. How about you?

Image of human brain by Joseph Vimont from US National Library of Medicine; public domain.